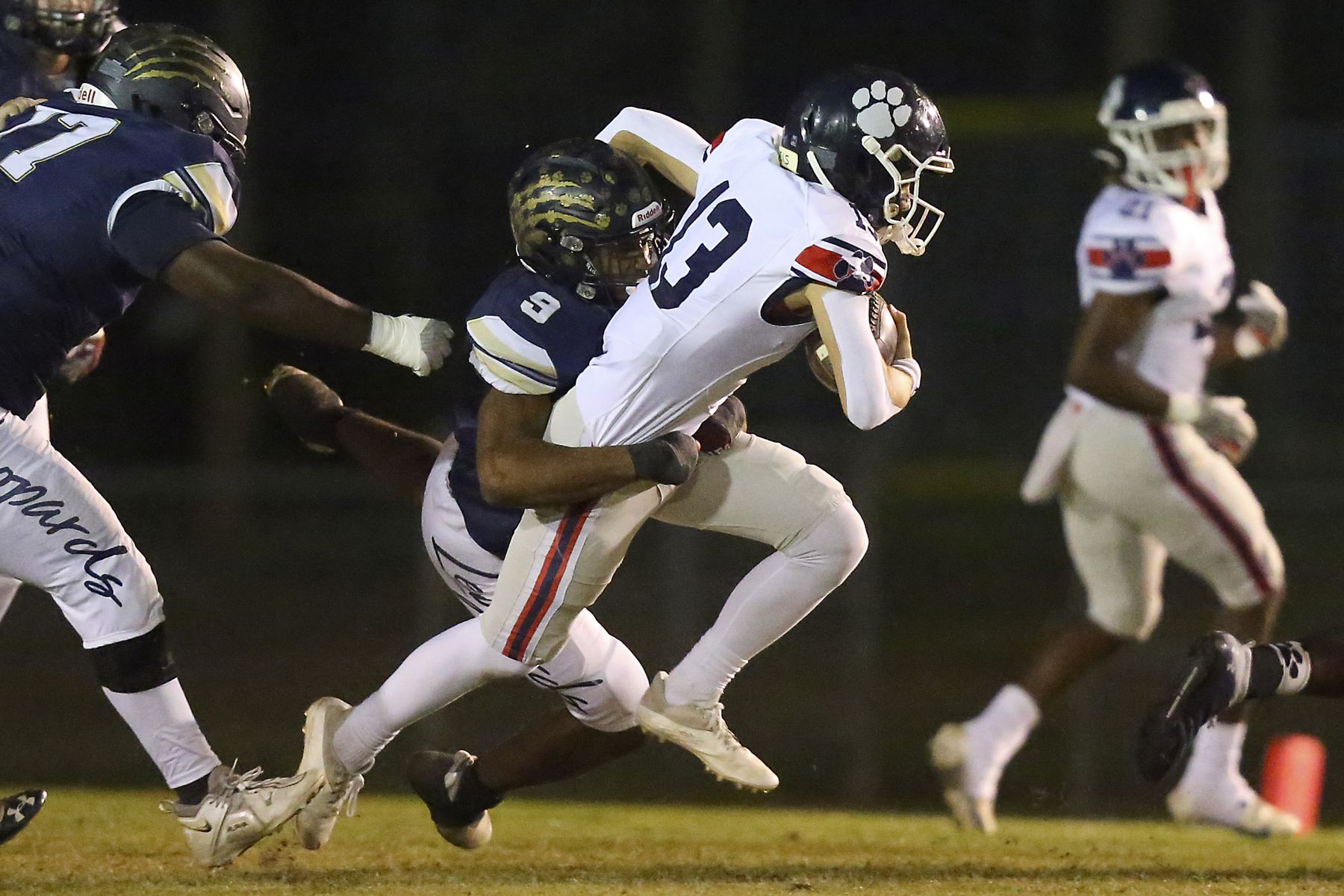 Mobile Christian’s defense came on strong in the second half and neutralized Trinity en route to a 27-13 victory in the Class 3A playoffs at Lamar Harrison Stadium in Mobile on Friday night.

Sterling Dixon had a strong night on defense, coming up with some huge tackles, and constantly harassing Trinity quarterback Walker McClinton. Patrick Sullivan Jr. added two touchdown runs, Michael Moore had a touchdown run, and Aaron Rogers, who was injured in the second half, had a touchdown reception for Mobile Christian (5-7).

The Leopards have won five straight after forfeiting four games for using an ineligible player and losing two more in overtime.

“Our defense did an excellent job,” Mobile Christian coach Ronnie Cottrell said. “The first half, it was a tough football game. We couldn’t hem up No. 13 (McClinton), what a great football player he is. But in the second half, we made some adjustments and Sterling had multiple sacks.”

Moore’s 37-yard touchdown run gave the Leopards a 6-0 lead. The score came after the Wildcats had Mobile Christian pinned down at the 1-yard line following a 69-yard punt. But a 56-yard pass from Miguel Camboia to Rogers got the Leopards going, and three plays later, Moore converted the fourth-and-3 with his score.

Sullivan’s first score of the game, a 5-yard run in the second quarter, put Mobile Christian up by seven, but on Trinity’s ensuing possession, McClendon, using his legs, caused the Leopard secondary to relax and found a wide-open David Lieux on a 55-yard touchdown pass with 6:45 to go in the half. Will Owen’s extra point tied it at 13-all.

Mobile Christian answered on its next drive, Landon Snow hit Rogers on a swing pass, and Rogers sprinted 83 yards for a touchdown to put the Leopards up 20-13.

The second half was basically a defensive battle, as Mobile Christian slowed the Wildcat offense in a scoreless third period. Freshman running back Jason Todd had several big runs to chew up the clock and the Leopards put the game away when Sullivan scored on a 14-yard run with 6:38 to go.

“Jason came in and ran the ball really well, and P.J (Sullivan) is such a quality guy,” Cottrell said. “We kept the ball almost the whole third quarter and then our offense was really solid and really consistent. We kept the ball away from their defense, and I thought that was a huge difference in the game.”

“Everybody came locked in,” Dixon added. “After the first quarter, we adjusted and made a lot of changes, and it turned out to be great.”

Coachspeak: “Our goal was to play 15 games this year, and hopefully that’s what we’re going to do.” – Cottrell

“This is a very hard place to play for a lot of reasons. I thought our offense played pretty well. Walker definitely made some plays with his legs and extended some plays. I’m proud of my boys and the way they kept playing. It was a hard-fought game and my hat’s off to Coach Cottrell and his group; they were ready to play.” – Trinity head coach Granger Shook

Play of the game: Several big plays could have easily qualified, but the biggest of all had to be Snow’s 83-yard swing pass to Moore. Snow rolled left, hit Moore out of the backfield, and the speedster outran Trinity defense enroute to paydirt.

Did you know?: This is the first time Trinity and Mobile Christian met in a football game.

They said it: “Our linemen were pushing those guys back. They played super hard and made some great blocks. The running backs just did a great job hitting the holes. Trinity is super tough, but we were able to get some yards after contact. Thankfully we were able to extend drives, get a touchdown and finish it off.” – Justin Barnes, Mobile Christian offensive coordinator

What’s next? Mobile Christian goes on the road to play Pike County in next week’s quarterfinals. Trinity’s season is over at 9-3. Olivia Culpo Supports BF Christian McCaffrey After He’s Traded: ‘Ready For Anything With You’ Latest News