Shochiku began streaming a second trailer on Saturday for the anime film of Mizuki Tsujimura‘s Lonely Castle in the Mirror (Kagami no Kojō) novel. The video previews Yuri‘s theme song “Merry Go Round.”

Shochiku is also streaming a five-minute behind-the-scenes video for the film. The video outlines the story, and features comments from the voice actors and director Keiichi Hara.

The film will open in Japan on December 23, and stars: 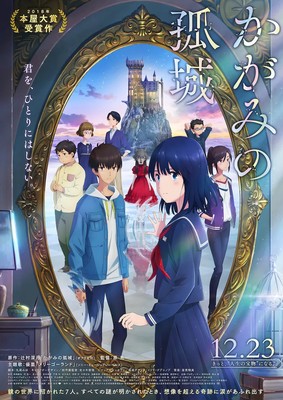 Tsujimura (Anime Supremacy! novel, writer for Naoshi Arakawa‘s A School Frozen in Time manga) released the original novel in Japan in 2017. It won the 2018 Japan Booksellers’ Award, topped Da Vinci magazine’s Book of the Year list in 2017, and won the grand prize in the King’s Brunch Book Prize 2017. Erewhon released a hardcover English edition of the novel on October 18.