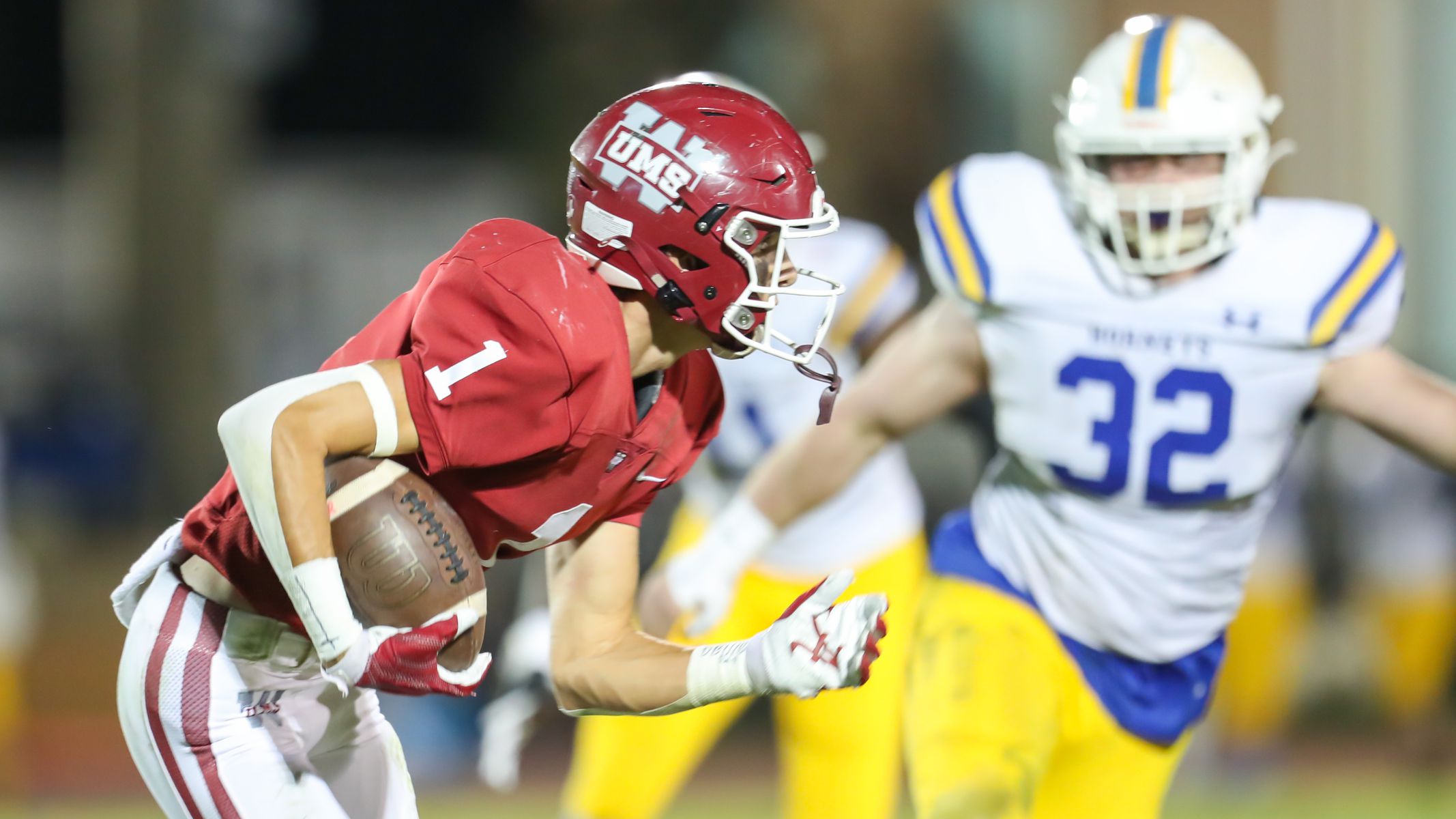 It took Joe Lott exactly 11 seconds to put No. 1 UMS-Wright on the scoreboard Friday night at Cooper Stadium.

The junior returned a squib kick 65 yards for a score and – though the lead was often tenuous – the Bulldogs never trailed.

“I saw it coming,” Lott said of the game’s opening kickoff. “It took a big hop right into my hands. I saw the hole open up, and I just hit it.”

Lott also returned a fumble 75 yards for a touchdown and star senior Cole Blaylock ran for 4 touchdowns as the Bulldogs improved to 12-0.

They will travel to Charles Henderson next week for the Class 5A quarterfinals. The Trojans defeated Tallassee 34-7 in their second-round game.

“If you are going to win a championship, at some point, you have to go on the road,” said UMS-Wright coach Terry Curtis, who collected his AHSAA-record 348th victory. “So, we’ll go on the road next week and see what happens.”

“We lost two football games,” Jones said. “Coach Curtis is the winningest coach in the state. We also lost to Danny Horn, who is the third winningest coach, so I think we can safety say our program is headed in the right direction.”

Beauregard ran 72 plays to UMS’ 38 and outgained the Bulldogs 403-242 in total yardage, but the Hornets couldn’t quite overtake UMS. Jones’ team got within five twice in the second half, 28-23 on Jacori Tarver’s 15-yard run with 7:04 left in the third quarter and 35-30 on Tarver’s 5-yard run a few minutes later.

“We kept fighting, kept trying to inch our way back into it,” Jones said.

UMS responded to the final Tarver TD with a seven-play, 61-yard drive that included six Blaylock runs and one by Lott. Blaylock scored the TD from 2 yards out. The try for 2 was no good, but the Bulldogs led 41-30 with 11:06 left in the game.

“The way they set up their sets,” Jones said when asked why Lott and Blaylock or so tough for opponents to stop. “They do a really good job of getting an extra hat on somebody. Now, those guys are good football players. I’m not taking anything away from them, but to me their bread and butter is those five up front. You need to put their names in the paper. They are the ones, in our opinion, we thought was the best group on the field, and they proved it again tonight.”

UMS put the game away after its defense finally forced a Beauregard punt. Blaylock made a spectacular catch on the sideline on a 3-and-13 pass from Sutton Snypes, then scored on 9-yard run. The PAT finished the scoring at 48-30.

Blaylock, a South Alabama commit, finished with 116 yards on 21 carries. His TD runs covered 2, 23, 2 and 9 yards. Lott had 36 yards on 9 carries in addition to his kickoff and fumble return scores.

“They are players,” Curtis said of his two stars. “We just keep trying to find ways to get them the ball. Quarterback, wideout. Whatever. He (Blaylock) made a big catch down there at the end. He’s just a tough player. He ended up playing defense at the end, too. They are great players. We just have to have some other guys step up and make some plays and do some things. I thought we were good tonight against a good football team.”