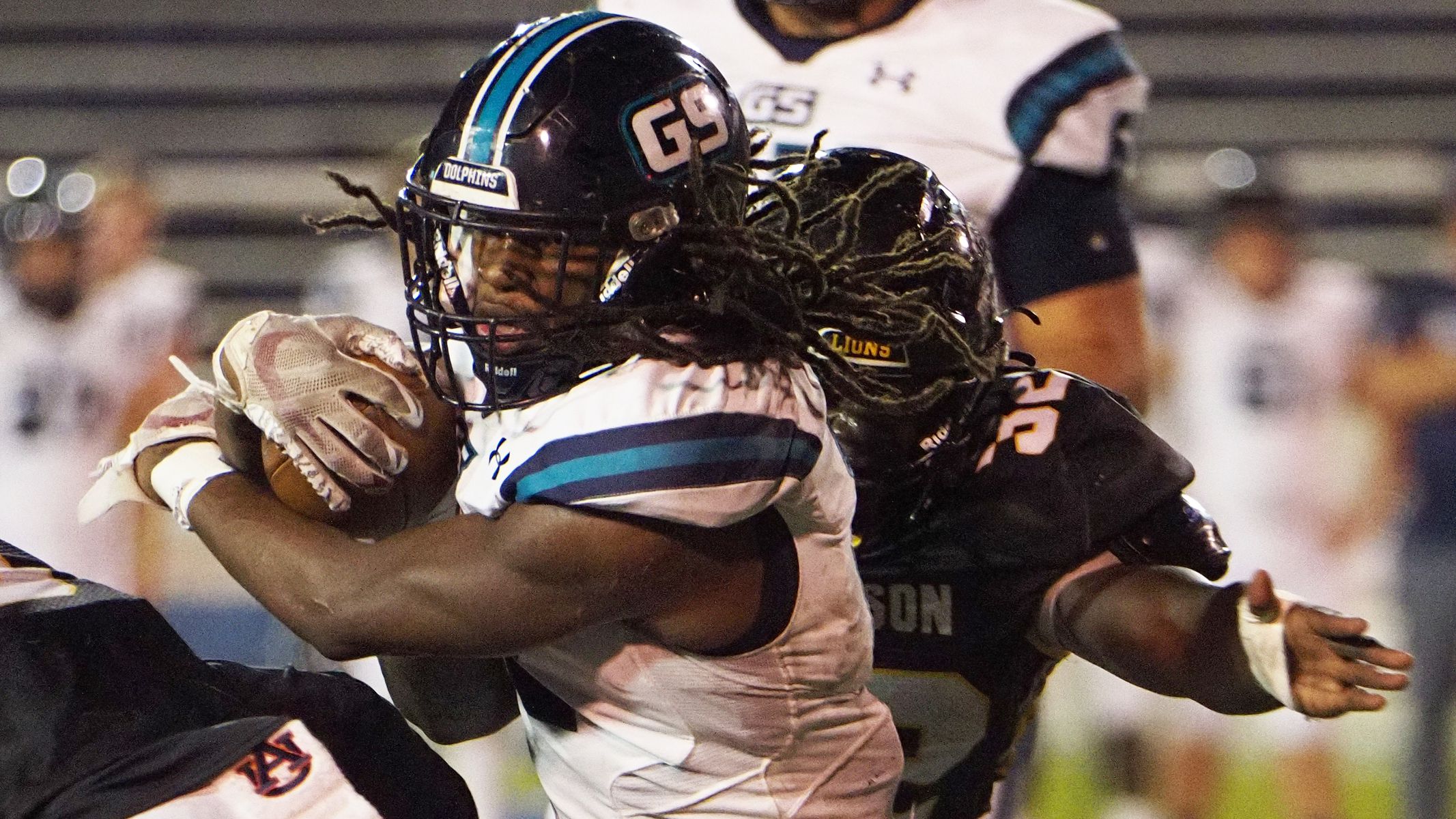 Ed King scored a pair of fourth-quarter touchdowns, while the defense of No. 9-ranked Faith Academy forced 6 turnovers in a 36-15 win over visiting No. 8 Demopolis in the second round of the Class 5A playoffs at Rams Field on Friday night.

The Rams improved to 10-2 overall and will travel to No. 5 Gulf Shores, a 26-21 winner over Central-Clay County, in the state quarterfinals this coming Friday, while the Tigers concluded the season at 10-2.

King accumulated 150 all-purpose yards, running 3 times for 124 yards and hauling in 1 reception for 26 yards, while teammate Christian Burnette had 154 all-purpose yards with 18 carries for 153 yards and 1 reception for 1 yard. Jarrett Daughtry was 12-of-24 passing, finding 8 different receivers for 154 yards. Dorian Smith caught 4 passes for 42 yards, Tynean Goodwill 2 for 11 and Michael Inge 1 for 40 yards to lead the victors, who had 16 first downs and 426 yards of total offense.

Kelvin Rowser led the visitors with 225 all-purpose yards, rushing 30 times for 194 yards, catching 2 passes for 11 yards and returning 1 kick for 20 yards. Kevin McElroy was 13-of-29 passing for 140 yards and was intercepted 3 times, ran 21 times for 13 yards and was sacked 6 times, Montgomery Freeman collected 5 passes for 32 yards, Dalyn Jackson 3 for 60 and Kentrell Adams 2 for 34 as Demopolis gained 25 first downs and 418 yards of total offense.

Isaih Henley recovered a fumble and Ja’Marion Bennett had 3 pass breakups to lead the Tiger defense.

Faith built a 21-0 halftime lead, but after a scoreless third quarter Demopolis scored on drives of 29 and 60 yards to close the gap to 21-15 with 9:48 left in the contest.

King then rambled up the middle untouched for a 72-yard scoring run with 6:08 remaining, then hauled in a 26-yard scoring pass from Daughtry with 2:05 to go to ice the contest.

Burnette then scored on a 26-yard run, leaving a pile of defenders in his wake, early in the second quarter while Daughtry hit Inge for a 40-yard touchdown with 1:21 to go in the first half.

The Tigers scored on a pair of drives early in the fourth quarter. Going to a heavy Wildcat formation, Javier Blanks scored on a 3-yard run and a 2-point conversion and then on a 50-yard jaunt with 9:48 still showing on the clock. Jose Tellez added the PAT to cut the lead to 6 points at 21-15.

Ronnie Royal scored a pair of touchdowns on the ground and Braden Jackson had a 90-yard interception return for a score as Gulf Shores won on the road.

The Dolphins improved to 11-1 overall with their eighth straight win and will host Region 1 rival Faith Academy in a rematch next week. Gulf Shores defeated the Rams 22-12 earlier in the season.

It’s the first time Gulf Shores has reached the quarterfinals in any classification.

Royal’s 15-yard TD run with 4:37 left in the game gave the Dolphins the lead for good. He also scored his team’s first TD on a 9-yard run and caught a 37-yard TD pass from Brendon Byrd.

Pleasant Grove capitalized on numerous Russellville mistakes to earn the Class 5A second round victory on the road.

The third-ranked Spartans (10-1) blocked a field goal that Cam Wormley returned 89 yards for a touchdown. They also got a fourth down stop and recovered a fumble that led to points.

Quarterback Eric Handley threw for 208 yards and a touchdown.

For the Golden Tigers (7-5) Harrison Burch connected with Richard Baker twice for their lone scores of the game.

Pleasant Grove advances to the 5A quarterfinals, hosting seventh-ranked Arab (11-1).

The Bulldogs played without star tailback Jamarion Burnett, who was held out after suffering a concussion.

Dorian Crittenden anchored the ground game by running 12 times for 130 yards and two touchdowns before being ejected in the first half. Jack Lathrop threw two touchdown passes to K.D. Denson. Zerrick Jones ran for 73 yards nad scored on a 3-yard run, and Cason Clarke kicked a 33-yard field goal.

“Anytime you can get a win, doing it without some of your guys, I think that says a great message to your football team,” said Andalusia coach Trent Taylor, who learned last week that he will inducted into the ASHAA Hall of Fame.

Andalusia (11-1) advances to play Anniston in next week’s quarterfinals.

Oneonta handed the Bulldogs their first loss after 11 straight wins to advance to the Class 4A quarterfinals. The Redskins (10-1) scored 27 unanswered points to pull away from a 7-6 advantage to a 34-6 lead.

Oneonta built a 21-6 halftime lead, getting touchdowns from Teigen Hill on an 80-yard opening kickoff return, a 2-yard run from Fluff Bothwell and a 46-yard pick-6 from Josiah Coover.

Oneonta pushed its lead to 34-6 on Landon Abernathy’s 16-yard pass to Hill and Malik Montgomery’s 6-yard run with 8:39 left in the game.

Priceville got a 12-yard run for a score by Mason Cartee and a 12-yard TD pass from Jackson Prickett to Gaines with 8 seconds left in the game.

The Redskins will host 12-0 Deshler in the quarterfinals.

Handley used a rugged running game and a stingy defense to knock off T.R. Miller in the second round of the Class 4A playoffs at Brewton Municipal Stadium.

Jamarius Haynes ran 25 times for 231 yards and scored four touchdowns. His TD runs covered 48, 8, 58 and 12 yards, as Handley (11-1) advanced to the quarterfinals for the third straight season.

Myles Johnson scored on a 1-yard run to give T.R. Miller an early 7-0 lead with 5:17 to go in the first quarter. T.R. Miller tied the game at 14-all with 17 seconds remaining in the first half on Broox Hart’s 27-yard interception return.

Handley advances to meet No. 1-ranked Montgomery Catholic in the quarterfinals next week.

Clarke County advances to play No. 5-ranked Highland Home in next week’s 2A quarterfinals.

Sweet Water built a 27-0 halftime lead and hung on to beat the previously Tigers.

The win sends the Bulldogs (8-2) to the 1A quarterfinals for the fourth straight season.

Lashon Young ran 20 times for 177 yards and scored on a 45-yard run in the first quarter. Jonathan Morris also scored on runs of 26 and 12 yards and Timothy Kelly scored on a 3-yard run.

Elba (11-1) then forced a Sweet Water punt and took over at its own 22 with 4:07 to play. The Tigers drove to the Bulldogs’ 42, as Henderson carried on six of nine plays. A pass on fourth-and-11 fell incomplete with 1:23 to play, and Sweet Water ran out the clock.

Sweet Water won its fifth straight game and advances to play Millry in next week’s 1A quarterfinals.

Brantley’s Keldric Brown ran for 135 yards and two touchdowns and added 10 tackles on defense to lead the Bulldogs to a sixth straight win at Linden Athletic Field in the second round of the Class 1A playoffs.

Brantley advances to play Leroy in next week’s quarterfinals. The season is finished for Linden (9-2). Computer rankings split on who should be College Football Playoff No. 1 Latest News