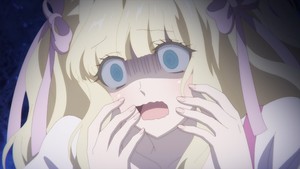 There’s a big difference between knowing something through experience and knowing it through a book. If the knowledge is purely theoretical, that difference may not be all that stark, but if it impacts the way that you do something or how you deal with other people, it can be much more serious. Did reading a book teach me how to clean a fish? Sure, in theory, but trust me, doing it in person for the first time netted me a much less fish-filled chowder than I was going for.

That’s not really a lesson Elianna has had to experience very much, if ever, or so this week’s episode of Bibliophile Princess leads us to believe. Prior to this week we’ve mostly seen the upside of Eli’s book habit; her ideas and knowledge have helped Chris (and others) to avoid unsavory situations or made a positive difference in general. But now that she’s on her own and away from the capital, she’s beginning to realize that her printed-paper theories may not always play out as nicely in real life as she expects. There’s really only the merest shadow of a plot point on the topic, primarily with Elianna coming face-to-face with someone who feels adversely affected by her words in Christopher’s ear, but if she’s going to be the queen, it’s something that she’s going to need to really consider. Much like life’s problems aren’t often solved in twenty-four-minute increments (less, if you count theme songs), real life doesn’t necessarily work exactly as written in the pages of a book. And with Chris off fulfilling a different royal duty, Eli’s more or less on her own with the seeds she has sown, because Theodore can really only do so much.

Thus begins a story arc where Elianna is going to have to prove that she’s more than just Chris’ bookworm fiancée. Separating the two is actually a pretty good plan, because up to this point we’ve mostly seen Eli through her interactions with her fiancé and his closest retainers. While we could infer plenty about her, we knew a bit less, so this is a chance to remedy that issue. It’s also something like confirmation of her more introverted nature; she’s doing her level best to do what is expected of her as a very public figure, but she’s clearly out of her depth and becoming worn out with the role she has to play. The only time we see her looking at all comfortable is when she inadvertently drives off Sofia and her cronies by discussing the uses of horse fat in healthcare, and that’s because it’s her only opportunity to share what she’s read, which is what makes her comfortable in company. She’s not completely alone – as I said, Theodore is there, along with the bouncy Lilia – but she’s more on her own than she has been before, and in a more precarious position.

We’ll see if the next episode or two can carry through on the promise this episode seems to be making about Eli’s character development. In the meantime, we can continue to admire something that’s really struck me about the art in this show: the lovely little details that contribute to its world-building and historical setting. They still may be no better than any other anime series at getting curtseys right (why is that so hard??), but if you’ve been paying attention, there are two distinct collar styles for women’s dresses that we see variations of in all of the noble women’s attire, as well as two clear sleeve styles. This week we also see an excellent example of what sidesaddle riding (in a dress) looks like, which leads me to believe that if Eli’s ballgown doesn’t move like she’s wearing a hoop, she probably isn’t. (Poor girl – to get a skirt that full without a crinoline required around forty pounds of clothing.) Now if the story can live up to this level of detail as it unfolds from here, or give us more of Eli not behaving as Chris imagines she will, I think we’ll be in good shape. Live-Action ‘And Yet, You Are So Sweet’ Film Casts Miu Suzuki – News Anime