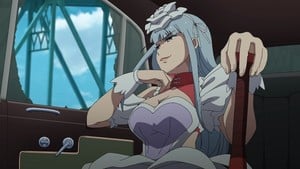 Akiba Maid War has been all about screwing with our expectations from the beginning. So the show going for some sort of surprising swerve here at the halfway point of the season is, itself, technically not that surprising. They put ‘War’ right there in the title after all, we should have sensed that a bigger conflict between the various crime cafes was brewing, with Oikny-Doink’s rather more…explosive approach to conflict resolution since Ranko showed up to be an obvious inciting factor in that. Manami, the big bad boss maid who shows up in this week’s episode to really codify that escalation, is even recognizable as the owner of those intimidating legs all our main characters are squaring up against in the show’s intro. Her arrival heralds this most bold, risky turn for the series yet: Akiba Maid War actually wants us to take it seriously now.

That is a proposition that is necessarily going to vary by viewer. But to its credit, Akiba Maid War commits to this turn just as thoroughly as it has every other step on its effective journey so far. Manami’s arrival to the Maidalien offices might be the strongest example yet of the show’s “Crime drama scene played straight except in maid outfits” gimmick. That’s been the point of so much of that previous world-building and contextualization, it seems: That we can watch this intense Yakuza story acted out in the most absurd costumes this show has yet presented. At this point in the episode, it almost seems like the ‘joke’ of Akiba Maid War is still in full effect, as it’s not anywhere else you’ll get to witness a candy-colored space maid seriously mutter the name “Oinky-Doink Cafe” in a deadpan, vengeance-swearing tone.

But then, as the drums of a full-blown Maid War continue to beat across this one’s run-time, we see and hear characters like Manami and Ranko discussing their pasts and paths that led to this point, and more of an idea of what this anime might be about starts to come into focus. “New ain’t always the answer to everything.” Manami intones, agreed upon by Ranko. Ostensibly, it’s an assertion of these two established maidenly murderers bringing their more direct flavor of problem-solving back to the mean streets of Akihabara. Manami in particular is put out by the modern management’s style of settling grievances with peace offerings and simple business resolutions, instead fully believing in the more assertive, might-makes-right road to respect attained through any bloodshed necessary. It’s a theoretical point that will be impressed upon poor Nanami by this episode’s end, that sometimes violence, sacrifice, and violent sacrifice are the only earnest options to move forward.

However, this theme can also be read on a metatextual level, and if you know me, you know I love the crap out of metatext, so let’s get meta for a minute. Manami’s (and to a degree, Ranko’s) embracing of the old-school can also be seen as embodying Akiba Maid War‘s style of story itself. What we might ultimately be seeing here is the creators’ efforts to keep the spirit of classic, hard-boiled crime stories alive the only way they thought they initially could in the current climate: Drenched in all the campy, otaku-appealing finery that they could muster. But that veneer itself is couched as a throwback, in all the grunge of the turn-of-the-millenium Akihabara setting. They’ve bemusedly drawn us in thus far, so what else is left on the agenda than for the Akiba Maid War anime crew to come in swinging like Manami with her bat and show all us kids how a story like this really turns out once it gets going?

The center of this turning point is Nerula, the cheerful Cafe Destron maid whom Nagomi befriended and has been getting advice from since the show’s start. I had actually been all but certain that Nerula was going to be packing some sort of late-game identity-based twist, her simply-sweet presentation of personality set to give way to her turning out to be a high-ranking maid boss or an undercover cop or something. But those theories were as doomed as Nerula herself turns out to be. Even as Maid War thrives on subversion, it’s also dedicated to effectively flavorful foreshadowing, so we can pretty well guess that things aren’t going to turn out well for Nerula as she begins piling up death flags in regards to her relationship with Nagomi. Is it to prime us to be a little more accepting of the seriousness of her death when it arrives at the episode’s end, or is it simply to mark the whole exercise as one more major step on Nagomi’s character arc taking her into the true darkness of Akihabara? Why not both?

Akiba Maid War is still affecting some of that trademark stylistic irreverence through this. The sisterly maid marriage scene between Nagomi and Nerula is a highlight, swapping out symbolically-shared sake sippings with a big ol’ bowl of ramen. It’s tonal dissonance that still underscores the story importance of this mechanic, laying out the motivational past of Ranko’s own lost sister, and giving way to the later implication that Chief only oversaw Nagomi’s Oath of Sisterhood as an in to spying on Maidalien. That’s how you really know Maid War is taking a swerve for the serious: Nagomi calls Chief out on her underhanded moves, and it’s an accusation played completely straight this time. It belies the lessons Nagomi is learning in watching the efforts of Chief, Ranko, and the others as things escalate here: What actually must be done, what you must be willing to do, to survive as a maid in Akihabara.

That’s all a roller-coaster of heady themes around what’s easily the most straightforward crime-drama episode of Maid War yet. Even the visual gag of it all being carried out by cafe maids can’t carry on as an entire joke at this point, since all the show’s dutiful world-building has, perhaps too effectively, cemented for us that this is just how Akihabara works in this weird alternate history. To that, and Nerula’s, end at the climax of this episode, we come to the key question of: How heavy do we want Akiba Maid War to get? Because what we have here is strong, affecting storytelling, especially for an arc like Nagomi’s that we knew would have to be covered somehow sooner rather than later. And it’s not like the show’s forbears such as Black Lagoon weren’t able to balance out darker, sadder instances of storytelling with other outlandish indulgences afterwards, then swing back to heaviness again. Is that part of the gimmick then? Is the show’s presentation confronting us with Nerula’s death and daring us to ask why a cafe-full of sheep maids beaten to death is a punch-line, but this single maid bleeding out in an alleyway is a tragedy entirely because the tone of the story said so?

That’s a question that might not be answered before the series is over, as we wait to see what kind of landing Akiba Maid War is even aiming for before we can see if it sticks it. Apart from the visceral delights of the show’s presentation up to now, there is potential for it to reach some truly intense highs after this. But it’s plotted out an especially narrow tightrope-walk for itself now in approaching it this way. In a vacuum, I believe this episode worked as a tense, well-structured half-hour of thematic drama on both a base storytelling and symbolic level. But compared to the series as we’d been drawn into it until now, it’s an anomaly that might be a swerve too far for some. And even if one does appreciate it, as I do, we won’t know how its true value shakes out until we know for sure where it was going.