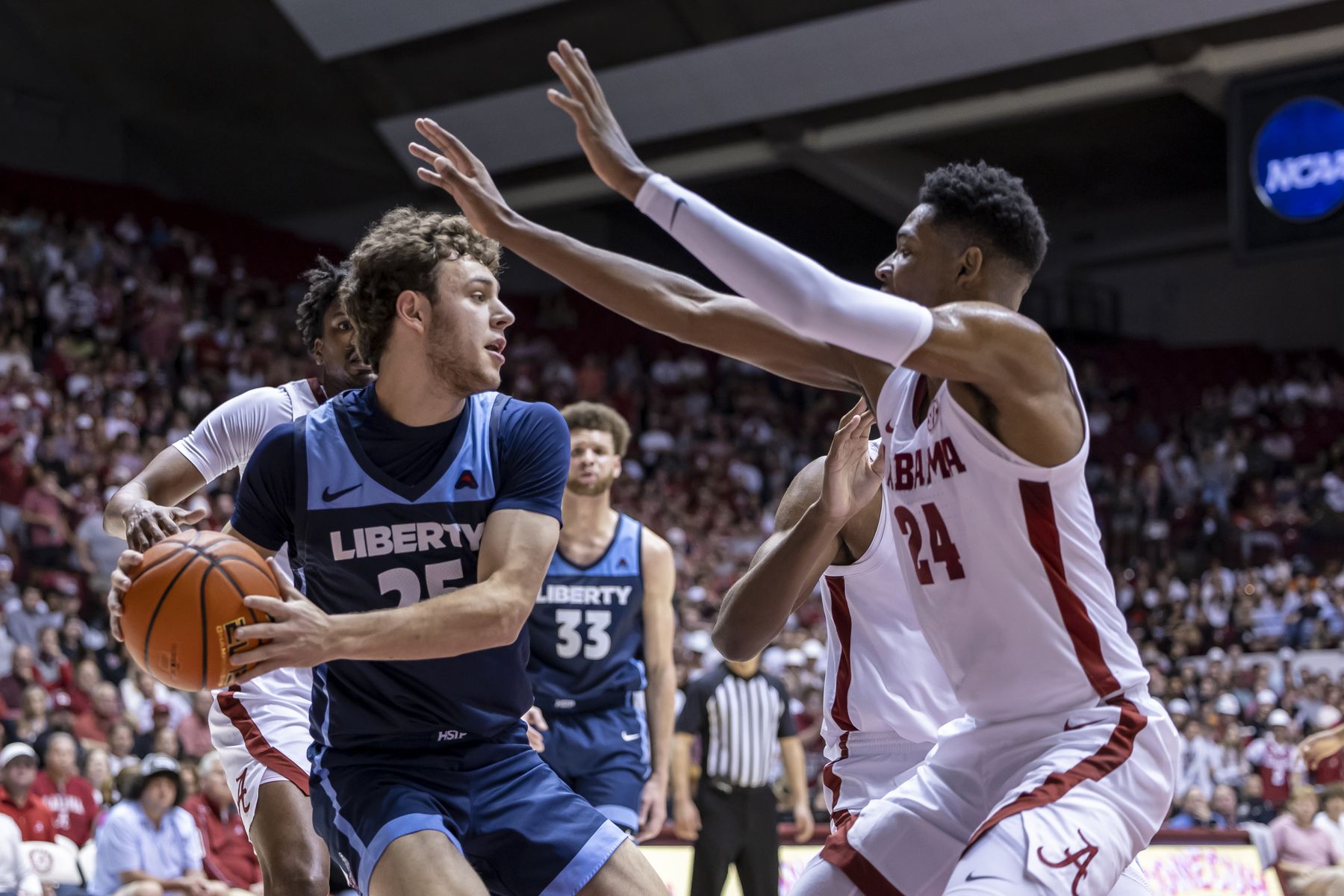 So, they can shoot too.

After a cold opener, No. 20 Alabama blitzed Liberty from the perimeter in a 95-59 win Friday night in Coleman Coliseum.

After combining to make just 6 of 50 3-point shots in an exhibition win over Southern Illinois and in Monday’s opener over Longwood, Alabama made 10 of 22 against the Flames.

That and Alabama’s extreme size advantage and aggressive defense turned a competitive game into a second-half rout. The Crimson Tide outrebounded Liberty 45-23 and held a 17-4 edge in second-chance points.

“That was a pretty dominating win,” Alabama coach Nate Oats said. “I was pretty happy with our guys’ effort, particularly on the defensive end of the floor … I think they struggled a little bit with our length and athleticism and finishing at the rim.”

Again, the Alabama newcomers led the charge as only two returning players saw action Friday. Muscle Shoals product Mark Sears, a transfer from Ohio scored 15 of his game-high 22 points in the second half as McDonald’s All-American freshman Brandon Miller also lived up to the billing.

Miller scored 20 points, making 4 of 5 from the perimeter and all six foul shots in his second collegiate game. Fellow freshmen Rylan Griffen and Jaden Bradley hit double figures with 16 and 10 points, respectively.

Alabama opened an 11-point lead before halftime with the hot shooting from the perimeter. An 11-0 run put the Tide ahead 10 after trading the lead early as Miller nailed all three of his first-half 3s.

“I felt like we got going pretty early,” Miller said, “and just maintained the energy that we had coming from each other. We just build each other up to win.”

The Flames’ pack-line defense is designed to clog the paint, Oats said, so the perimeter shooting was necessary to loosen things up down low.

“Brandon, being as long as he is, can shoot over them a little bit so it was huge that Brandon made those,” Oats said.

Sears also knocked down 3 of 5 from deep while Griffen was 2-for-6.

There was a point early where Oats wasn’t loving the defense quite as much. Liberty took a 14-13 lead on Darius McGhee’s layup that drew a quick timeout from the Alabama bench.

“He put some fire into us,” Sears said of Oats, “and that really set the tone throughout the game.”

Alabama scored the next 11 points and never trailed again.

The Tide was also more careful with the ball early after committing 19 turnovers in Monday’s season-opening win over Longwood. Its first giveaway didn’t come until the 9:15 mark in the first which also saw Alabama make its first eight foul shots. Alabama finished with 15 turnovers.

Liberty worked the fundamentals and passing lanes for layups but Alabama still blocked six shots and finished with a 34-18 edge in the paint.

Alabama heads to South Alabama at 9 p.m. CT on Nov. 15 before returning to Coleman Coliseum next Friday against Jacksonville State.