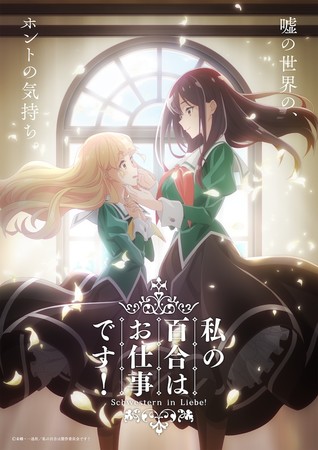 The official website for the television anime adaptation of Miman‘s Yuri Is My Job! (Watashi no Yuri wa Oshigoto Desu!) manga revealed on Friday that the anime will premiere in spring 2023. The website also revealed four more cast members.

Yui Ogura and Sumire Uesaka are reprising their roles of Hime Shirasagi and Mitsuki Ayanokōji, respectively, from the seventh manga volume’s promotional video.

Hijiri Sanpei (Wasteful Days of High School Girl) is directing the anime at Passione and Studio Lings, and Taisuke Iwasaki is designing the characters. The company Infinite is producing the project.

Kodansha USA Publishing is publishing the manga in English, and it describes the story

Hime is a picture-perfect high school princess—she’s admired by all and never trips up! So when she accidentally injures a café manager named Mai, she’s willing to cover some shifts to keep her facade intact. To Hime’s surprise, the café is themed after a private school where the all-female staff always puts on their best act for their loyal customers. However, under the guidance of the most graceful girl there, Hime can’t help but blush and blunder! Beneath all the frills and laughter, Hime feels tension brewing as she finds out more about her new job and her budding feelings …

Miman launched the manga in Ichijinsha‘s Comic Yuri Hime magazine in November 2016, and Ichijinsha will publish the 11th volume in Japan on November 17. Kodansha USA Publishing released the ninth volume on July 12.

Update: The anime will debut in spring 2023.