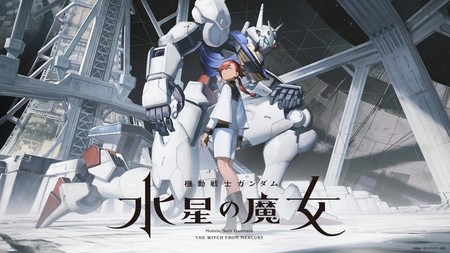 As some fans have pointed out, the pose is an apparent homage to a Mobile Suit Gundam 0080: War in the Pocket home video cover.

In addition, the Gundam Factory Yokohama will hold separate “GFY×Yoronoyo「NIGHT VIEWING」” shows as part of the Yokohama bay’s annual Yorunoyo night show, which takes place in the city’s central coastal area. The five-minute shows will take place nightly at 6:00 p.m. and 7:00 p.m. from October 24 to January 3.

The facility is currently closed for maintenance until Saturday when it will reopen with a tie-in campaign with the Mobile Suit Gundam: Cucuruz Doan’s Island anime film. Director Yoshikazu Yasuhiko and mechanical designer Kunio Okawara will hold a talk show on Saturday commemorating the film’s upcoming home video release in Japan on November 25. Visitors will also enjoy unique latte art at the adjoining Yokohama Satellite café, a mini-exhibit in the conference room, and a free illustrated postcard for visitors until December 11.

The 18-meter-high (59-foot-tall) life-size, moving Gundam held its grand opening for public viewing in December 2020. The facility will remain open to the public until March 31, 2023. This extends the time it will remain open by a year.