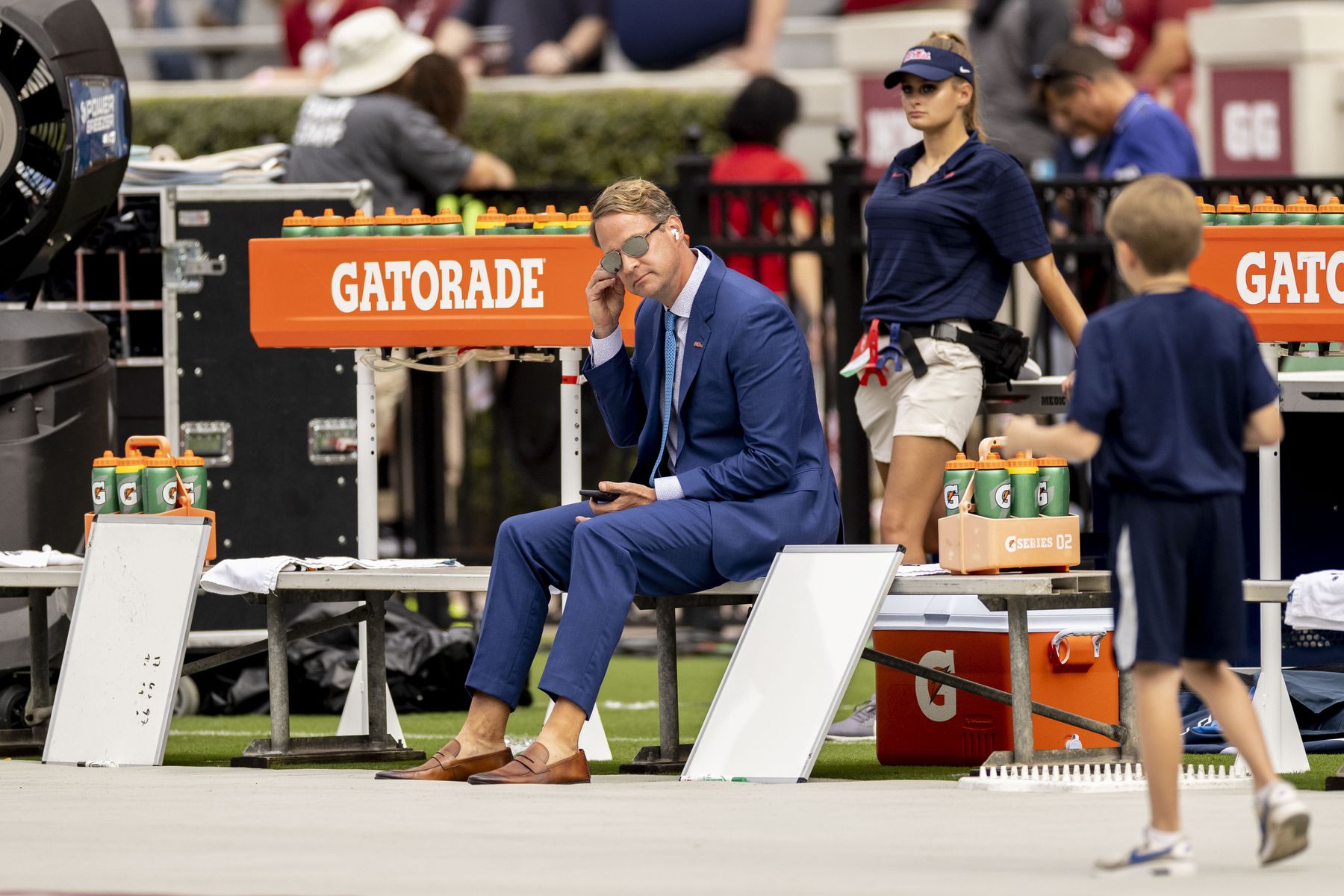 Lane Kiffin is turning into the greatest showman in college football, and one of his best bits is needling Alabama with kindness.

As opposed to, say, Hall of Fame Auburn coach Pat Dye, who enjoyed sticking it to Alabama with a sword.

No.9 Alabama (7-2, 4-2 in the SEC) plays No.11 Ole Miss (8-1, 4-1 in the SEC) this week in Oxford, and so Kiffin is having fun again with Saban and the Crimson Tide. Kiffin’s most recent form of bookish humor is no doubt appreciated by everyone in college football except the team that began the season ranked No.1 in the country and has lost a pair of heartbreakers.

Earlier in the week, Kiffin took a picture of the best-selling book by my colleague and AL.com sports editor John Talty and posted it to social media. Talk about an unexpected gift for Talty’s book sales. The title of the book is “The leadership secrets of Nick Saban: How Alabama’s coach became the best ever.”

“Well-written,” Kiffin said about the book when asked on Wednesday.

For the oh-so-serious world of the SEC, it was pure comedy gold.

GOODMAN: Give Cadillac a chance to win the job

JOE VS THE PRO AND THE HERO: Week 11 picks

Kiffin worked with Saban as Alabama’s offensive coordinator from 2014 to 2016, and those three seasons rejuvenated his career after being fired at USC. It also extended Saban’s dynasty, but Kiffin doesn’t get enough credit for that. Saban then famously fired Kiffin before the 2017 national championship game against Clemson. Kiffin had been hired by FAU, and Saban said Kiffin had become too distracted. Steve Sarkisian took over the offense on short notice and Alabama, with freshman Jalen Hurts at quarterback, lost to Clemson 35-31 on the last play of the game.

Coincidentally, both of Alabama’s losses this season also came on the final plays of games. First there was the stunner at Tennessee, and then last week LSU, in a legendary call by first-year Tigers’ coach Brian Kelly, went for two in overtime to upset mighty Alabama.

And so now questions are here about the crumbling of Saban’s dynasty with Kiffin wielding a book about Saban like sledgehammer. Saban himself has joked in the past that if he ever lost three games in a season, then that might be the thing that forces him unwillingly into retirement.

Hmm. Yeah, Alabama has high standards, but something tells me Saban could lose to Ole Miss and Auburn to finish the season and still have a job if he wanted it.

Nothing happens in a vacuum in the SEC West, and so the fact that Kiffin is being suggested as a candidate for Auburn’s open football coaching position adds to the intrigue of this weekend’s game. I’ll be in the press box at Vaught-Hemingway Stadium, and like everyone back in Alabama I’ll be observing things through a filtered lens that wants to know if Kiffin could turn Auburn into a college football super power if given the chance.

Is Kiffin even interested in leaving Ole Miss for Auburn? He’ll never say. They never do, but Auburn is, on paper, a better gig than Ole Miss. Even Tommy Tuberville knows that.

There might be more pressure at Auburn than Ole Miss, but there are also more resources to win a national championship.

Auburn’s new director of athletics, John Cohen, is putting together a list of candidates to replace fired football coach Bryan Harisn. Kiffin should be at the top of that list. In the meantime, he’s having fun enriching the SEC with his knack for self promotion. Sometimes that backfires spectacularly in his face, of course, which only makes him more interesting.

I like that Kiffin can laugh at himself, though. Drama has surrounded him throughout his entire career, but he has now learned how to embrace it. I wouldn’t say that makes him endearing, but it’s certainly a life skill that would help him at Auburn.

“Get your popcorn ready,” Kiffin said last year on national television moments before his Ole Miss football team was kerneled 42-21 by Alabama. When Alabama fans sent Kiffin a bunch of popcorn after the game, Kiffin used it for a funny post to social media. As the entertainment business goes, football considers itself serious stuff. If there is no crying in baseball, then there is no laughing in football.

Kiffin laughs loudest of all either with Alabama or at Alabama. It’s hard to interpret which one it is sometimes, but know this. With Kiffin at Auburn, the Iron Bowl would be like the Super Bowl of the South.

Does Kiffin need to actually defeat Alabama in a game as a prerequisite for coaching at Auburn? It wouldn’t hurt. Cohen, who was the AD at Mississippi State before taking over the same position at Auburn this week, is no stranger to Kiffin’s abilities as a coach and an entertainer. Cohen said he wants a coach who’s a good “fit” for Auburn. No one is confusing Kiffin for the second coming of Pat Dye, but these are different times. Kiffin’s play-calling and ability as a recruiter gives him value in a changing landscape for the SEC that will soon include Oklahoma, Texas, a new conference schedule and an expanded playoff.

Wouldn’t want to be the team matched up against Kiffin and Auburn in a playoff with one week to prepare.

Kiffin is a squiggle of crayon in a world of regimented lines. He’s Bill Murray in “Stripes,” a movie about a comedian who joins the military. In this analogy, Alabama’s Saban isn’t just an officer in the Army. Saban is the U.S. Army, and Kiffin is the merry prankster who knows the inner workings of all the secret weapons.

Joseph Goodman is a columnist for the Alabama Media Group, and author of “We Want Bama: A season of hope and the making of Nick Saban’s ‘ultimate team’”. You can find him on Twitter @JoeGoodmanJr. Saweetie invites fans to get ready with her Latest News