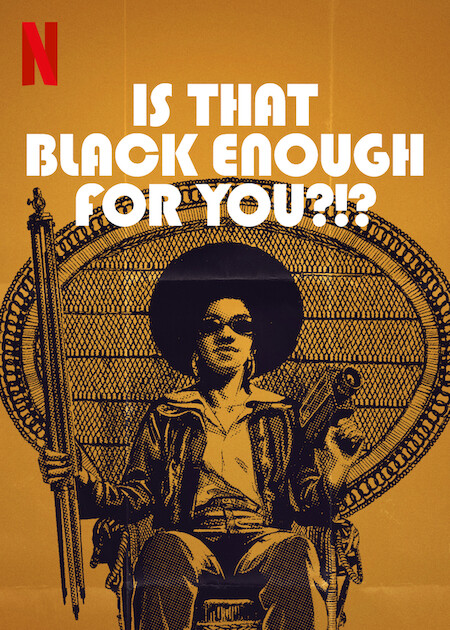 In “Is That Black Enough for You?!?,” film critic, historian and curator Elvis Mitchell takes us on a very personal, at times sprawling, always insightful tour, covering pioneering films featuring such Black actors such as Harry Belafonte, who is interviewed by an off-screen Mitchell, as well as the late Sidney Poitier and Dorothy Dandridge and also what were commonly known as Blaxploitation films. Mitchell also explains out how the soundtracks of “Super Fly” (1972) and “Shaft” (1972) made as lasting a contribution to our culture as the films themselves. As a boy, Mitchell recalls being interested in films with the word “black” in the title and why no Black people were in them. Mitchell reminds us of a time when people of color played by white actors in as “Gunga Din” (1939), and two versions of “Othello” (1951 and 1965) with, respectively, Orson Welles and Laurence Olivier in blackface.

Once, the film screen was full of such stereotypes as Stepin Fetchit and Buckwheat. But after the riots of the 1960s, things changed. Glimmers of a more equal representation appeared with such films as “Nothing But a Man” (1964) with Ivan Dixon and Abbey Lincoln and in the career of Poitier, who appeared in both “Guess Who’s Coming to Dinner” and “In the Heat of the Night” in 1968. Pioneering indie filmmaker Melvin Van Peebles made the studio film “Watermelon Man” (1970) with the great Godfrey Cambridge. That same year, Cambridge also appeared in the groundbreaking “Cotton Comes to Harlem,” an adaptation of a novel by Chester Himes.

Meanwhile, Van Peebles made waves with his follow-up film, the controversial indie “Sweet Sweetback’s Baadasssss Song” (1971). With its revolutionary plot and rebellious Black main character (played by Van Peebles himself), its soundtrack by Earth, Wind & Fire, and probably most important, its great box-office success, “Sweet Sweetback’s Baadasssss Song” changed the game. Mitchell recalls seeing a Black actor “carry a movie and carry a gun” in George A. Romero’s landmark 1968 horror film “Night of the Living Dead,” a film in which a Black man (Duane Jones) holds off an army of the undead only to die at the end at the hands of the ignorant local police. Long before the 1960s and 70s, Oscar Micheaux (“The Homesteader,” 1919) made over 40 films, blazing the trail.

Pam Grier, the star of such Blaxploitation classics as “Coffy” (1973), “Foxy Brown” (1974), and “Scream, Blacula, Scream” (1974) was one of the most popular and profitable female leads in her youth. Photojournalist-turned-film director Gordon Parks would direct the original “Shaft” (1971), a film featuring a sexier, more violent and radical version of Poitier’s Mr. Tibbs in the form of the immortal John Shaft (Richard Roundtree). The “Shaft” soundtrack album by Isaac Hayes earned two Emmys. The theme from “Shaft” won an Academy Award for Hayes. The film spawned a franchise. Samuel L. Jackson, who played John Shaft in the 2000 adaptation, is one of the artists interviewed by Mitchell. Among the others are Laurence Fishburne, Whoopi Golldberg, Margaret Avery, Glynn Turman, Zendaya and a notably contemplative Billy Dee Williams. Most importantly, Mitchell shares his wide-ranging, profound knowledge and understanding of the subject. “Is That Black Enough for You?!?” is a cross between a film encyclopedia and a film critic’s diary. Don’t miss it.

(“Is That Black Enough for You?!?” contains profanity, nudity and violence)