The official website for Mobile Suit Gundam: The Witch From Mercury (Kidō Senshi Gundam: Suisei no Majo), the first new Gundam television anime series in seven years, published an English translation of Ichiro Okouchi‘s “Cradle Planet” prequel short story for the anime on Thursday. The story is told from the point of view of the Gundam Aerial, and is also the basis of the lyrics for YOASOBI‘s opening theme song “Shukufuku” (The Blessing) for the anime. The anime’s Japanese website published the short story on October 2.

YOASOBI also released an English version of “Shukufuku” with an accompanying music video on Wednesday. 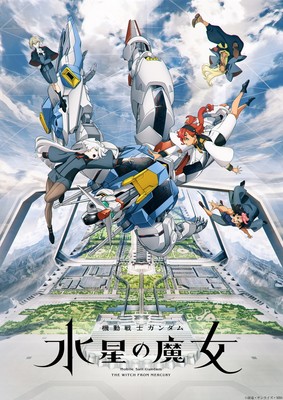 The show is the first main Gundam television anime series with a female protagonist. The anime premiered in Japan on October 2 on MBS and TBS, and it airs on Sundays at 5:00 p.m. The anime’s second part will air in April 2023 in the same Sunday 5:00 p.m. time slot on MBS and TBS as the first part. The Film References in the Chainsaw Man Opening – Interest Anime