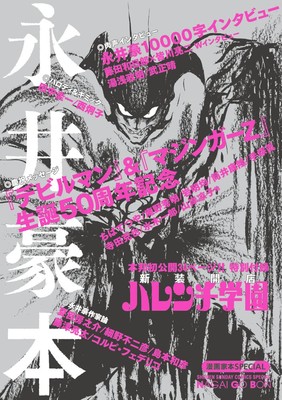 The original Harenchi Gakuen manga is set in a school where both teachers and students are all sexual perverts who show off their panties, or peep at girls while they are changing.

Nagai began the Harenchi Gakuen manga in the inaugural issue of the now-institutional magazine Weekly Shonen Jump from Shueisha on August 1, 1968. The manga ended in 1972. Nagai published a new manga titled Heisei Harenchi Gakuen, first with two chapters in Nihon Bungeisha‘s Weekly Manga Goraku in 1994, and then more chapters in Jitsugyo no Nihon Sha’s Weekly Manga Sunday in December 1995.

Nagai debuted as a manga artist in 1967 with Meakashi Polikichi and went on to create many classic and genre-defining works, including Cutie Honey, Devilman, Mazinger Z, Getter Robo, and Harenchi Gakuen. In recent years, he has continued to pen new spinoffs, such as his ongoing Devilman Saga manga. He has also serialized the autobiographical Gekiman! manga about the creation of his various notable titles.