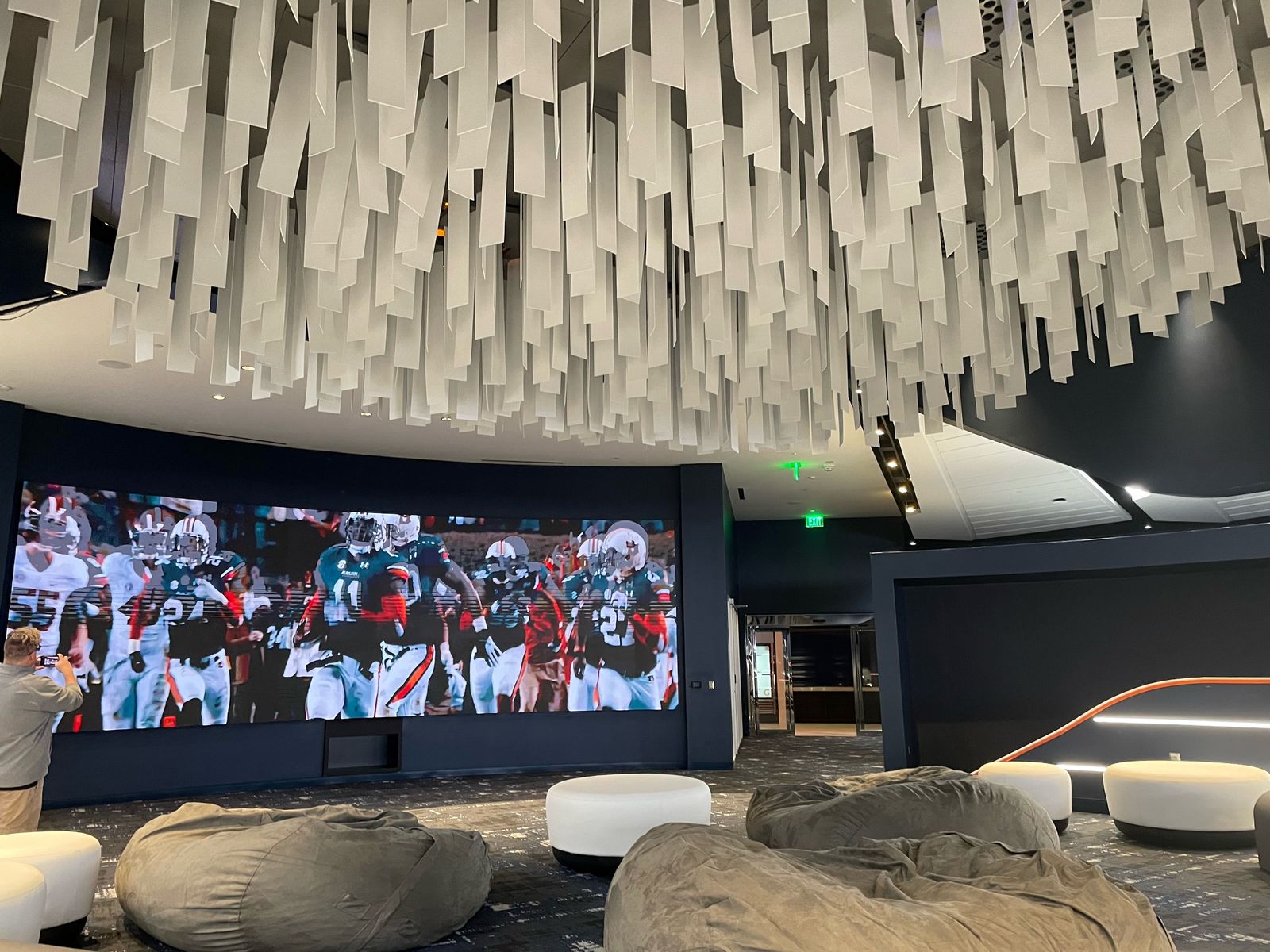 Auburn football has a new home.

The program on Friday unveiled the new Woltosz Football Performance Center, the Tigers’ $91.9 million football-specific facility that began construction in March 2021 and was recently completed. The team is expected to move in “soon,” but not before the end of the regular season.

Local media were given a guided tour Friday of the facility, which is also open to the public for tours from 4-6 p.m. this Friday and next Friday, on the eve of Auburn’s home finale against Western Kentucky.

Mississippi State is in John Cohen’s DNA, but “a whole lot of wow” drew him to Auburn as AD

Goodman: Give Coach Cadillac a chance to win the job

You can watch a video highlighting the tour at the top of this page. Below is a description of the walkthrough provided to the media:

Upon entering the facility, there’s a public lobby that welcomes visitors and features nearly 2,000 square feet of digital media boards, as well as a display of the team’s BCS National Championship trophy. That leads into the main entrance of the facility, featuring the program’s NFL pedigree and highlighting Auburn’s professional players.

That hallway branches off into three spots. To the left is the new weight room, which features 22 weight racks along the main floor, cardio equipment upstairs, an indoor ramp for conditioning drills (like the outdoor one at the athletics complex) and is 25,000 square feet, or roughly the size of the new Publix in downtown Auburn. Each weight rack includes a Perch system, with a camera scanning players’ reps and movement, providing data for feedback and analysis. That data can be displayed on the videoboard in the weight room for competitive use among the team, on a rack-by-rack basis.

Lighting in the weight room is made to look like eagles in flight, and there is also theatrical lighting in the middle of the room that is capable of focusing on each weight rack for dramatic effect on max-rep days. According to Gregory Forthofer, Auburn’s manager of capital programs, there was “significant focus” placed on the design of and upgrades to the weight room.

Next to the weight room is the new indoor practice facility, which includes all LED lighting, has better acoustics than the current indoor practice field and has more runway between the practice field and the walls. Along one side of the indoor facility are three garage-style doors that lead to the two outdoor practice fields. The indoor facility has much more natural lighting, with glass facades throughout. The speaker system, installed on each column within the facility, can reach 130 decibels to help simulate crowd noise. Those columns also feature CATAPULT antennas to set GPS parameters to track the technology on players — speed, player performance evaluation and more. There are no video towers in the indoor facility or the outdoor fields, with Auburn opting for more modern technology for filming practices. There is a remote video studio with 10 work stations to control and edit practice footage, with cameras strategically installed throughout the indoor and outdoor fields. Those cameras also include microphones that communicate with the work stations, in case a coach wants a specific drill or play zoomed in on or highlighted in the studio. The outdoor practice fields also have LED lighting to reduce light pollution in the area.

Next to the practice fields is the sports medicine area, which Forthofer said was another area highlighted during the design process. The room features taping tables along one side, exam tables in the middle and rehab stations along the wall overlooking the outdoor fields. Major improvements were made to the hydrotherapy aspects of the facility, with four wet pools, including a HydroWorx 2000 aqua therapy pool that includes an adjustable underwater treadmill for rehabbing and underwater cameras to observe. There is also a hot tub, a cold tub and a large plunge pool, which is kept between 53 and 55 degrees for players to take 10-minute soaks in after practices. Its proximity to the practice field is also strategically planned in the event a player overheats during practice.

Down the hallways is an equipment innovation lab and showroom that includes a 3D printer and Falcon Pursuit machine that provides full-body scans — with 1,000 pictures taken on a 360-degree rotating system — to provide accurate data points to analyze and overlay player performance in real time on a screen and develop braces and other gear.

The first of two locker rooms includes 125 huddle lockers for clothes, with a TV monitor with each player’s name, a storage drawer, cupholder and zero-gravity chair. In the middle of that locker room is a lounge area, featuring custom beanbag chairs, gaming chairs and other seating, as well as a 9-by-28-foot concave video wall that can stream video, TV and videogames. Above the lounge area is a felt overhang meant to look like the rolled oaks at Toomer’s Corner. This locker room also features a barbershop.

The second locker room is made for getting ready for practice and is more akin to a mudroom. Forthofer called it an “armory,” where players will keep their football gear. The separate locker room for this purpose was inspired by NHL locker rooms, specifically the one the Nashville Predators use.

Upstairs is a 180-seat team meeting room that can be partitioned into two separate 90-seat rooms. According to Forthofer, Auburn looked at facilities of the Chicago Bears and Miami Dolphins extensively for ideas. At the college level, Clemson, South Carolina, Troy, West Point and Northwestern also served as inspiration. Also at the pro level, the aforementioned Predators facilities, as well as some English Premier League clubs. The idea was to make the facility comparable to those but find ways to separate Auburn’s new, state-of-the-art facility from its peers.

The final stop on the tour was a walkthrough hallway that led to the position meeting rooms. Everything in those meeting rooms is movable; no stationary chairs, to provide flexibility. The walkthrough room features three projectors that splice together one life-size image onto the wall to help walk through specific situations and plays opponents run. LSU, as well as the New England Patriots, Chicago Bears, Miami Dolphins and Houston Texans all have that technology in their team facilities. Dear Annie: How do I get my teenage son to interact more with his much younger brother? Latest News