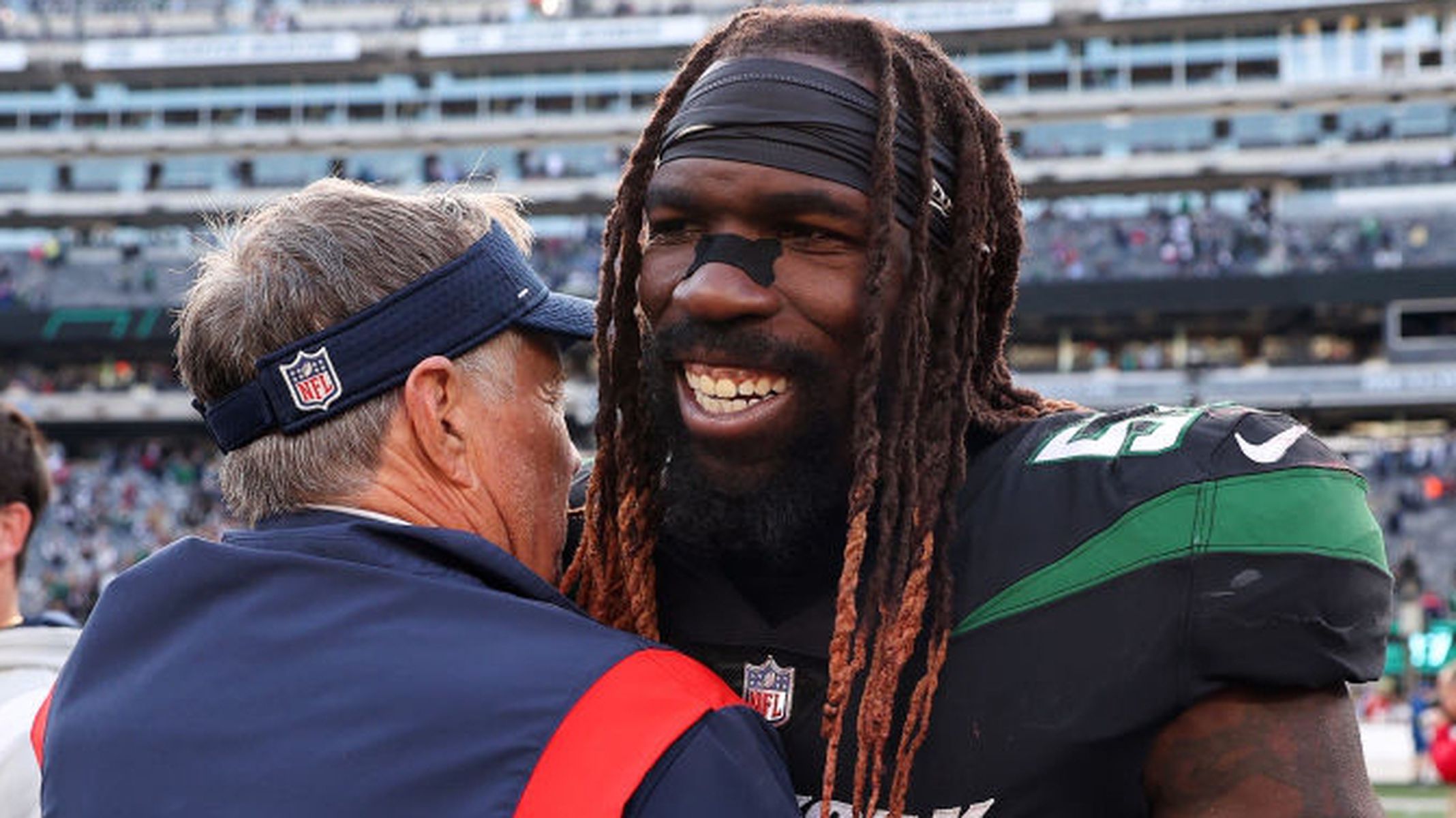 When the New England Patriots return from their bye in Week 11 of the NFL season, they’ll have the opportunity to play their way out of the cellar of the AFC East.

While the extra time gives coaches the opportunity for evaluation and adjustments, they might want to find a way to keep New York Jets linebacker C.J. Mosley from playing like he “heard the play in the huddle” when the Patriots return to action on Nov. 20.

New England won its two games before its break, beating the Jets 22-17 on Oct. 30 and the Indianapolis Colts 26-3 on Nov. 6. But for Belichick, the middle linebackers for those teams, Mosley and Shaquille Leonard, showed too much savvy.

“I thought that there were two or three plays, for sure, that Leonard really got a big jump on and stopped us basically on those plays,” Belichick said after the victory over Indianapolis. “Mosley got a couple of those a couple weeks ago in the Jets game. It looked like Mosley almost heard the play in the huddle, he was on it so fast. Leonard had a couple like that, too, so whether that’s something we were giving away or just something that he anticipated based on whatever the keys were that he might have picked up, we certainly want to try to prevent that.

“I thought that Leonard, for sure, did it, and Mosley had a couple plays like that as well. That’s what good defensive players do. They anticipate things, and they are able to sometimes get a read on what they think is going to happen. They’re not always right, but sometimes they are, and they can certainly make you look bad offensively.

“But as an offense, you always want to be balanced, and then try not to give things away to the point where you don’t have something complimentary that goes with them, so that’s kind of the game within the game there.”

Mosley made 13 tackles against the Patriots, including 10 solo stops. Entering Week 10 of the NFL season, the former Theodore High School and Alabama standout ranks second in the league with 88 tackles.

“C.J. Mosley was all over the field,” Belichick had said after New England beat New York. “I don’t know how many tackles he had. It seemed like he must have had 15 or 20, but we hung in there and got enough plays out of all three units — offense, defense and special teams.”

If the Patriots’ offense is tipping its plays, New England quarterback Mac Jones said it needs to get corrected during the bye week. But the former Alabama All-American said the bigger goal is better execution of those plays.

“I think every defense and offense and special teams is going to do an evaluation,” Jones said, “but I feel like we, like I said, it comes down to our execution, and that’s what we need to do is just go out there and do it a little better, no matter what’s called. … It’s just, like I said, if I don’t do my reads right or someone misses a route or protection, it’ll never work out. That’s just football, and that’s how it is. …

“I think, like I always say, in the NFL, there’s good players everywhere. We watch film. We sometimes know what teams are doing. Sometimes we don’t. I think people just watch a lot of film, and there’s good players out there, so you just have to give credit where credit’s due. Obviously, we want to fix anything that we’re giving away, but at the end of the day, we’ve got plenty and we just need to do better.”

At 5-4, the Patriots are looking up at the rest of the AFC East but are only 1.5 games behind the first-place Buffalo Bills. Buffalo has a 6-2 record, with the Jets and Miami Dolphins at 6-3.

Of New England’s remaining eight games, half are against division opponents. After playing the Jets for the second time, the Patriots play the Bills on Dec. 1 and Jan. 8 and the Dolphins on Jan. 1.

Jones sustained an ankle injury on the Patriots’ final snap of the Patriots’ third game of the season on Sept. 25. He missed the next three games and played only three series in his return on Oct. 24.

Jones went all the way under center in the past two games. While New England won those contests, the offense produced only two touchdowns, and one of those scoring “drives” started at the Indianapolis 2-yard line after a blocked punt. Patriots kicker Nick Folk made nine field goals in the two games.

“I think every offense and every team is still going to be a work in progress,” Jones said on Wednesday. “At any level you’re constantly trying to get better, right? Unless you’re winning the championship, you’re not satisfied, right? So everybody’s working. We’re all trying to just focus on today and get better, get better as a team. Obviously as an offense, we want to score more points, no more turnovers and all that. We can control those things, and if we can control it, then we need to take control of it. That’s one of the big things. There’s things that are out of your control and there’s things that you’re in control of, so just trying to focus on those things.”