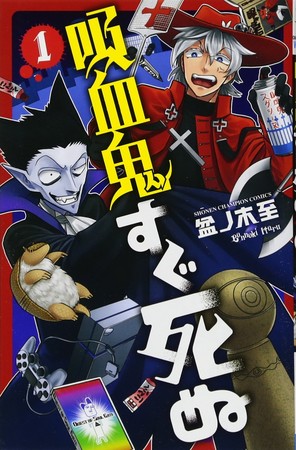 This year’s 50th issue of Akita Shoten‘s Weekly Shōnen Champion revealed on Thursday that Itaru Bonnoki‘s The Vampire Dies in No Time (Kyūketsuki Sugu Shinu) manga will go on hiatus on for about one month due to the author’s poor health. The manga will return with its 310th chapter in the magazine’s first 2023 issue on December 1.

The manga went on a 1-week hiatus in September due to the author’s sudden illness. The manga had gone on a 1-month hiatus in April.

The gag manga centers on Dralc, a vampire who is feared as he is rumored to be invincible. The vampire hunter Ronaldo goes to Dralc’s castle after hearing that Dralc has kidnapped a child. But when Ronaldo arrives at the castle, he finds that Dralc keeps dying over every small thing and turning to dust. Dralc’s true nature is that of the weakest vampire of them all.

Manga creator Bonnoki launched the manga in Weekly Shōnen Champion in June 2015. Akita Shoten published the manga’s 22nd compiled book volume on September 8, and it will publish the 23rd volume on December 8.

The manga inspired a television anime that premiered in Japan in October 2021. Funimation streamed the anime as it aired in Japan. The first season had 12 episodes.

The show’s second season will premiere in January 2023. Episode 5 – The Eminence in Shadow Anime