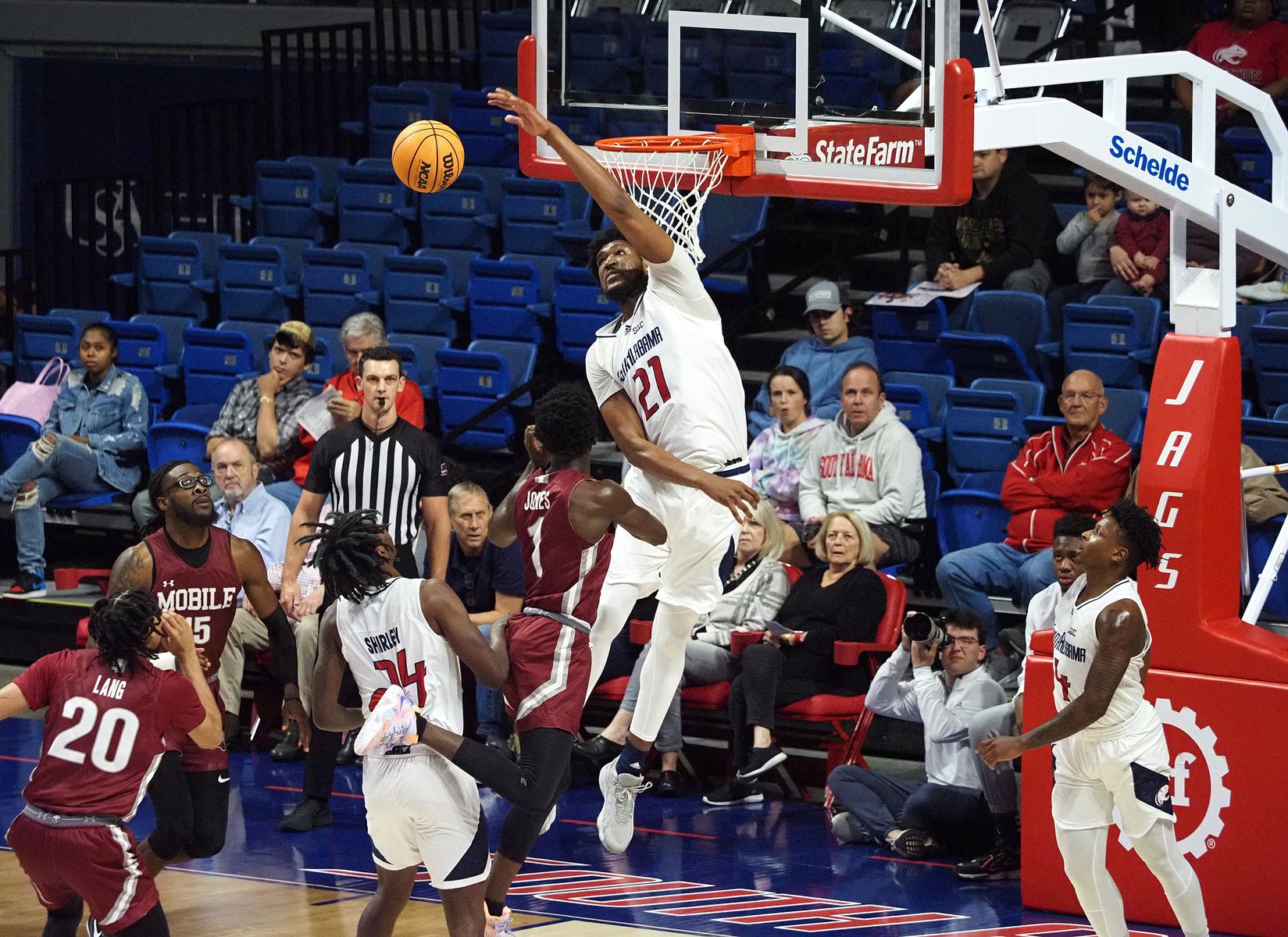 A quartet of newcomers pushed South Alabama to a 97-59 victory over Mobile in its season-opener Wednesday night at the Mitchell Center.

Kevin Samuel, Isaiah Moore, Greg Parham and Jamar Franklin combined for 73 points as the Jaguars (1-0) breezed past their NAIA neighbors from across town. Samuel, a 7-foot transfer from Florida Gulf Coast, recorded a double-double with 16 points and 12 rebounds — plus three blocks and two steals — despite playing just 21 minutes.

“It’s always a little bit nervous on opening night,” South Alabama coach Richie Riley said. “I was proud of how our guys responded. … A lot of guys got to play double-digit minutes, which is a positive. A lot of young guys got out there, got some real bump in a Division I game. It was good, man.”

Franklin, a freshman, scored 15 of his game-high 18 points in the second half. Twelve of 13 players on the South Alabama roster played at least four minute, with only senior Diante Smith sitting out despite being in uniform on the bench (Smith’s mother died unexpectedly during the offseason, and he is still “working his way back,” Riley said).

Moore added 14 points and five assists, while Parham had 15 points. Moore transferred in this season from Division II Franklin Pierce College, while Parham — a former VMI transfer — saw his first action as a Jaguar after sitting out all of last season with a back injury.

“It felt good, especially being able to get out there for the first time in a while,” Parham said. “It was a great team win — everybody played a part, everybody played well. It was a good building point for the rest of the season.”

The Jaguars led 47-28 at halftime after shooting 59% from the floor. Samuel had six straight points at one stretch on a dunk and a pair of hook shots for USA, which led by as many as 22 points.

South Alabama continued to pour it on in the second half, pushing its lead to 30 points at 74-44 with 10:36 to play. It was at that point that Riley began to empty his bench, with no one playing more than 25 minutes.

South Alabama shot 58% for the game, and limited Mobile (3-1) to 33%. The Jaguars won the rebounding battle 44-34 and turned the ball over only seven times.

“In a game like this it’s easy to get real sloppy and turn the ball over too much, or get real thirsty and to force too many balls and try to get some points,” Riley said. “Our guys didn’t do that. They were incredibly unselfish, they were disciplined enough to hold themselves to seven turnovers. We had five at halftime and I challenged them at halftime — I wanted it to be below 10. It was seven, and that was great, especially with 17 assists.”

Ezra McKenna led Mobile with 13 points, while Logan Foutz added 12 and DeMariee Jones 10. The Rams stayed in the game early with three 3-pointers in the first 10 ½ minutes, but made only two after that.

“It was good to know just how deep we are,” said Samuel, the ASUN Defensive Player of the Year last season at FGCU. “The coaches have been pushing on us in practice and we were able to come out today and get the ‘W.’ Everybody was on the court and was successful. That’s something that transferred from practice to the game, so I’m happy to see that.”

South Alabama hits the road for a Friday night date at New Mexico before returning home to host Alabama for the first time in program history. Tip-off Friday in Albuquerque is set for 8 p.m.