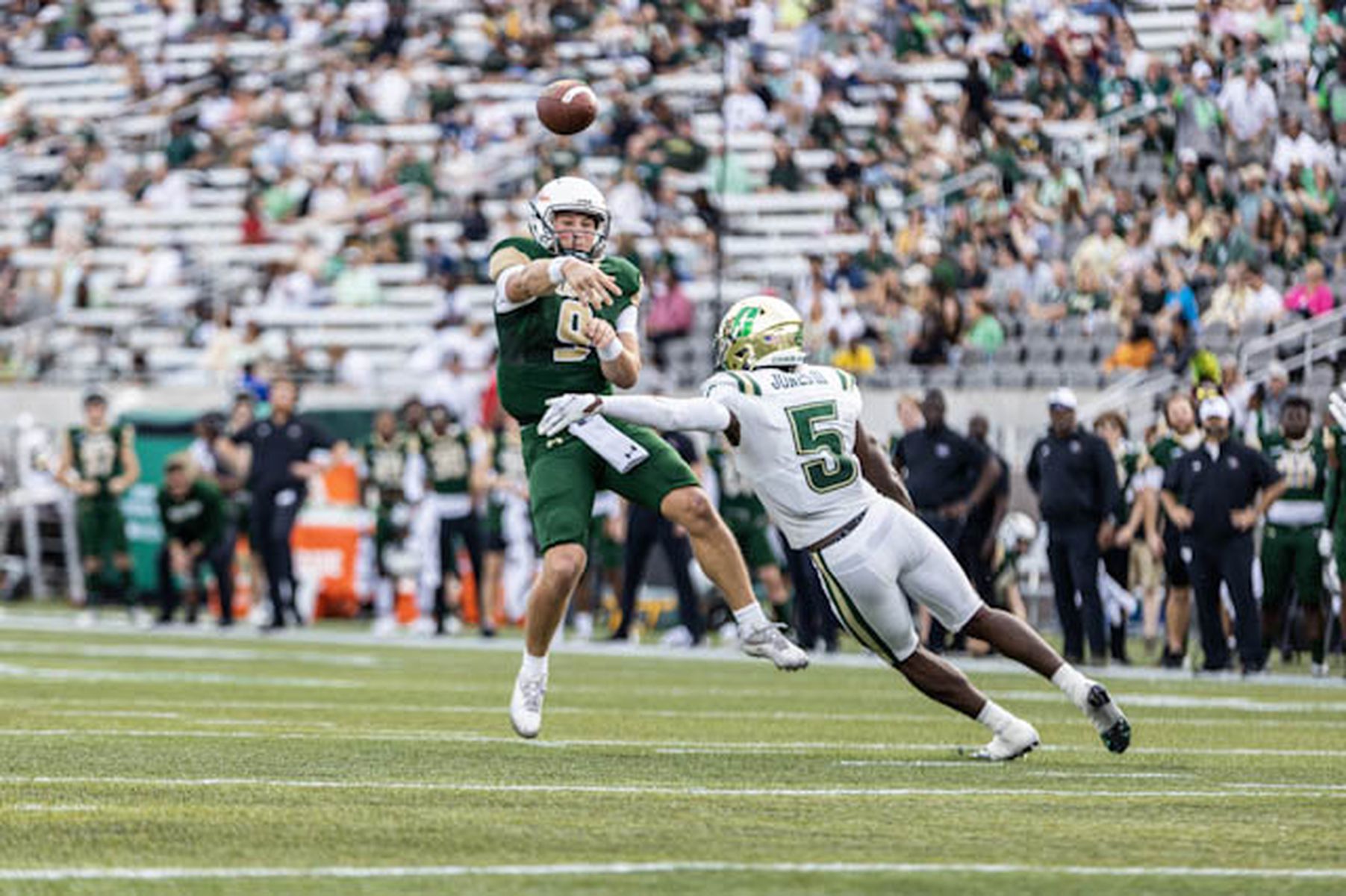 Time is running out on bowl eligibility for the UAB football team but the Blazers can keep their hopes alive as they honor 21 seniors in the regular-season home finale against North Texas, Saturday, Nov. 12, at Protective Stadium in Birmingham.

UAB faces off against North Texas in regular-season home finale

So how do the teams match up? Here is AL.com’s position-by-position breakdown for UAB’s showdown with the Mean Green:

Jacob Zeno has performed admirably the last three weeks since being thrust into action on the road against Western Kentucky, but Dylan Hopkins has been a full participant in practice this week and was named the starter by UAB interim head coach Bryant Vincent. Zeno could still see some action this week considering the progression during his time as the starter.

North Texas quarterback Austin Aune is one of the oldest players currently in C-USA, due to playing a few years of minor league baseball, and is as experienced as any play of the team. The junior has completed 58.2 percent of passes for 2,753 yards, throwing for 28 touchdowns and 11 interceptions, and leads the Mean Green’s 24th-ranked passing offense (285.2 ypg). Backup Grant Gunnell has taken few snaps this season and Stone Earle is a threat in running packages, rushing for 90 yards and a score on 16 carries. Advantage: Even

DeWayne McBride continues to be one of the most productive running backs in the entire nation this season and shows no signs of slowing down for an attack ranked sixth in the nation in rushing offense (244.4 ypg).

The Doak Walker and Maxwell Award candidate leads the nation in rushing yards per game (160.9), has the most rushes of 20 yards or more (16), and rushed for more than 100 yards in nine straight games dating back to the win over No. 13 BYU in the 2021 Independence Bowl. McBride is the second player in program history to eclipse 3,000 yards (Spencer Brown) and is 300 yards shy of the program’s single-season rushing record and 3 touchdowns away from the single-season rushing touchdown record.

Jermaine Brown is as adept in the rushing game as McBride but also adds an element to the passing game. The junior has rushed for 539 yards and 3 touchdowns this season, adding 108 yards on 16 receptions.

Although the Mean Green are known to heave the ball around the field, their running game is powering the offense this season, ranking 14th in rushing offense (218.6 ypg) and sixth overall (503.8 ypg) in the nation. North Texas has five players with at least 100 yards and a score, led by sophomores Ayo Adeyi and Oscar Adaway. The former leads the team with 690 yards and 4 touchdowns, followed by Adaway with 583 yards and 5 touchdowns and 5 receptions for 29 yards and a score.

UAB’s receiving corps is a unit that prides itself on downfield blocking for McBride but stepped up the last two weeks for Zeno in the passing game and is coming into its own late in the season. Hopkins is set to start this week and the group should be just as productive in steering away focus from the running game.

Trea Shropshire came up clutch for the Blazers against UTSA, catching a game-tying 38-yard touchdown pass to send the game into overtime, and leads UAB with 546 yards and 3 touchdowns off 25 receptions. Tejhaun Palmer caught the go-ahead score in the first overtime session and has a team-high 26 catches for 386 yards and 2 scores.

T.J. Jones has displayed elusive speed and ability in his role coming out of the backfield, amassing 25 receptions for 200 yards and a score on a jet-sweep pass. Samario Rudolph has speed to separate and outrun defense, hauling in 9 receptions for 203 yards and 2 touchdowns, and Dexter Boykin and Fred Farrier II have contributed a combined 11 catches for 124 yards, the latter catching Zeno’s second touchdown pass of the season at Western Kentucky.

Bryce Damous and Terrell McDonald lead the tight unit, compiling 14 catches for 132 yards and 3 touchdowns, and Brody Dalton is expected to miss this week.

Along with an abundance of running backs, Aune has a plethora of pass-catchers with which to distribute the ball. North Texas has four receivers with at least 200 yards and a score and two tight ends with at least 300 yards and 2 scores each.

Junior Roderic Burns leads the team with 33 receptions for 623 yards but has scored only once this season. Jyaire Shorter and Ja’Mori Maclin are the speedsters and deep threats, both averaging 25 yards per reception. Shorter has 18 receptions for 452 yards and 8 touchdowns and Maclin has 14 catches for 355 yards and 2 scores. Damon Ward and Jordan Stewart have similar numbers, combining for 33 catches for 466 yards and 3 touchdowns, and Tommy Bush has 3 catches for 34 yards and a score.

Jake Roberts operates as the primary tight end, bringing down 20 receptions for 308 yards and 2 touchdowns, and Var’Keye Gumms is an H-back with lead-blocking capabilities and is a threat in the passing game with 25 catches for 389 yards and 5 touchdowns. Advantage: North Texas

UAB’s offensive line has powered McBride to an All-American caliber season, and the offense to 3,120 total yards through nine games this season, but have given up 16 sacks along the way and a multitude of false start penalties.

Kadeem Telfort and Sidney Wells anchor the line on the outside and Quincy McGee and Matt Trehern are road graders on the interior. Junior center Will Rykard and backup left tackle and RHINO lineman Trey Bedosky have been day-to-day this week, and Brady Wilson could land his first start at center if Rykard is unable to give it a go against the Mean Green.

North Texas’ offensive line is a mismatch of upperclassmen and a couple of first-year starters, and helps power a highly successful offense. The unit has allowed only 9 sacks this season and is anchored by senior center Manase Mose, who has made 58 consecutive starts for the Mean Green.

Junior Cole Brown started the first 8 games of the season at left tackle but an injury brought an end to his 31-game starting streak. Fellow junior Kaci Moreka has started the last two games in place of Brown. Sophomore Gabe Blair is in his second year working left guard, and right guard Febechi Nwaiwu and right tackle Jett Duncan are in their initial year starting on the line. Advantage: Even

UAB took a hit in its defensive standing after last week but still welds a mighty degree of fear for opposing offenses. The Blazers are ranked 35th in total defense (346.7 ypg) and have a plus-1 turnover margin despite having a rash of turnovers in its first three losses.

The defensive line has played well this season with a batch of new starters and Michael Fairbanks II leads the unit at the SAM defensive end position, collecting 28 tackles (1.5 for loss) and 1/2 sack. Fish McWilliams and Isaiah Forte have stepped up as leaders this season and clogged the running lanes along the interior. McWilliams has 24 tackles (4 for loss) and 1.5 sacks, followed by Forte with 23 tackles (1 for loss).

Drew Tuazama is getting better each week and becoming a playmaker for the defensive front, racking up 21 tackles (3.5 for loss) and a team-high 3.5 sacks. Tyrique Howard and Kevin Penn have worked their way back into the lineup after a few missed games, combining this season for 16 tackles.

North Texas runs a multiple defense and often deploys in a 3-3-5 alignment. Despite the multiple looks given to opposing offense, the Mean Green rank 118th in total defense (449.7 ypg) and 101st in rushing defense (176.5 ypg).

The defensive line has contributed to a strong rushing defense but has collected half of the Mean Green’s 22 sacks. Junior Kadren Johnson leads the unit at defensive end, posting 17 tackles (3.5 for loss) and 3.5 sacks, and Tom Trieb and Cam Robertson bring up the rotation, combining for 34 tackles (6 for loss) and 1.5 sacks.

Noah Wilder laid it all out on the line last week heading into overtime against UTSA, giving an impassioned sideline speech for his defense and demonstrating his unquestioned leadership. The senior leads the team with 90 tackles (3.5 for loss), adding 2 pass breakups and a forced fumble and recovery, and currently sits at fourth place (318) on UAB’s all-time tackles list and 4 tackles away from moving into third place.

Tyler Taylor is quietly putting up an all-conference season next to Wilder, amassing 60 tackles (4.5 for loss), 1.5 sacks and an interception. Behind Taylor and Wilder, Jackson Bratton and Reynard Ellis have played well this season, combining for 39 tackles (1.5 for loss).

The strength of the North Texas defense is in its linebacker corps, home to the Mean Green’s top 3 tackle leaders on the team. The unit is led by All-C-USA performer KD Davis, amassing a team-high 97 tackles (2 for loss), a sack and a pass breakup. Sophomore Jordan Brown works behind Davis, collecting 29 tackles (3 for loss) and a sack on the season.

Larry Nixon III operates opposite of Davis in the middle, recording the second-most stops with 62 tackles (1 for loss) and a sack, and Kevin Wood rounds out the rotation in the middle with 37 tackles and an interception. Rather than using a JACK linebacker, North Texas calls it the Devil and Mazin Richards is quick off the edge, registering 60 tackles (8.5 loss) and a team-high 6.5 sacks. Sifa Leota is behind Richards, recording 16 tackles (3.5 for loss) and 1.5 sacks. Advantage: Even

Starling Thomas V leads the cornerback rotation with 19 tackles and 10 pass breakups, but the unit took a hit with an injury to Mac McWilliams and the redshirt sophomore is set to miss his third straight game. In his stead, Devodric Bynum and Colby Dempsey have seen an uptick in snaps, the former recording 20 tackles (2.5 for loss) and 7 pass breakups, and CD Daniels and Xavier Lanier provide experience to wrap up the rotation.

The Mean Green often uses a 2-high safety look in the backend but it has not fared that well for a secondary ranked 112tg in passing yards allowed (273.2 ypg). The unit has 6 of the team’s 7 interceptions this season and led by senior safety Sean-Thomas Faulkner, who is fourth on the team with 54 tackles (1 for loss) and 3 pass breakups. Logan Wilson and Keelan Crosby share the other safety spot, combining for 57 tackles and Wilson collecting 2 interceptions and 5 pass breakups.

The Blazers are as solid as they come on special teams and can turn the field in a snap when needed. Kyle Greenwell is one of the best punters in program history and is having another great season, averaging 44.9 yards on 31 punts, forcing 8 fair catches and 5 touchbacks, and downing 9 kicks inside the 20-yard line. Matt Quinn has power and accuracy but has hit a few speedbumps this season, hitting 9-of-14 field-goal attempts with a long of 51 yards.

North Texas has two of the best specialists in the league and is adept at scoring off stalled drives and flipping field position. Senior Ethan Mooney is 15-for-16 on field-goal attempts, knocking back a long of 49 yards, and has 48 touchbacks on 64 kickoffs. Fellow senior Bernardo Rodriguez is averaging a solid 40.9 yards per punt but has excelled in pinning the opposition deep, punting 37 times while forcing 23 fair catches and downing 12 kicks inside the 20-yard line. Advantage: Even

Bryant Vincent accepts responsibility for UAB’s failures this season but there’s stock in keeping the team focused and together during an uncertain time. The Blazers are 0-5 in one-possession games this season and a total of 27 points (5.4 ppg) separates them from a perfect record. Seth Littrell has turned the Mean Green back around after a couple of down seasons and can clinch a spot in the C-USA title game with a win over the Blazers. Advantage: North Texas

Both teams match up rather well and both are playing to extend the season. The Blazers are fighting for their lives, needing a win to stay in bowl contention, and the home advantage should prove valuable after taking league-leader UTSA down to the wire before falling in overtime last week. Advantage: UAB