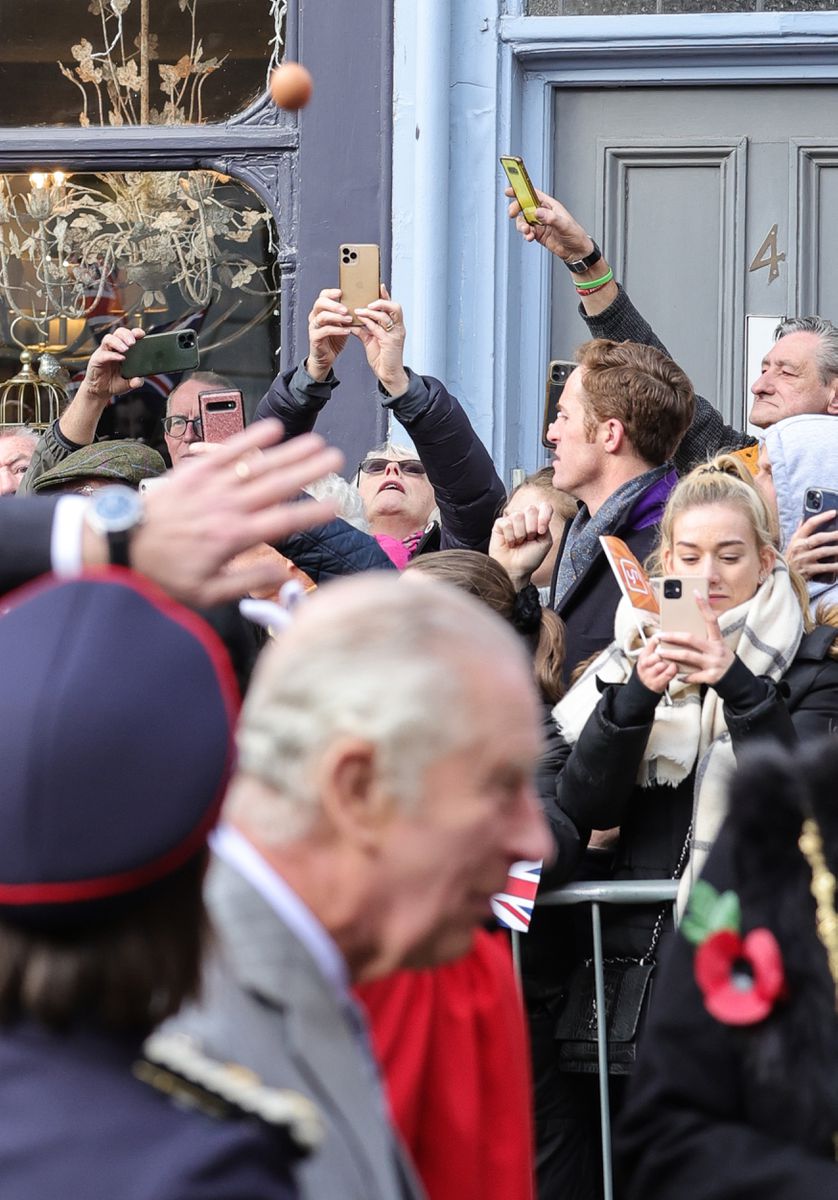 King Charles III and and wife Camilla, the queen consort, were the targets Wednesday of an egg-throwing protester in York, where they were meeting with local dignitaries amid well-wishers during a traditional visit.

The eggs wound up smashing on the ground, not on the royals, and the 23-year-old man who allegedly hurled them was detained by police. While officers struggled to bring the man to the ground near a crowd barrier, he shouted, “This country was built on the blood of slaves,” according to The Associated Press.

The eggs appeared to fly between Charles and Camilla and the people they were meeting, according to ITV video. The ceremony continued with hardly a hitch.

Charles — who continued shaking hands with York officials, the BBC reported, paused briefly to look down at the shattered eggs. He and Camilla were visiting York to witness the first unveiling of a statue of his mother, the late Queen Elizabeth II, since her death in early September at age 96.

Well-wishers who gathered at York’s Micklegate Bar — a medieval gateway that is the traditional site where monarchs are welcomed into the city in northern England — shouted the man down after the incident, AP reported. They booed and chanted things including “Shame on you” and “God save the king.”

The man, whose name was not released, was in custody on suspicion of a public order offense.

“Those in public life are in positions of vulnerability at times and I certainly want to live in a country, and indeed in a world, where we’re not so surrounded by people minding us that we can’t meet people and chat with people,” Stephen Cottrell, archbishop of York, told the BBC. “That is certainly what the king and the queen consort want.”

The royal couple chatted with well-wishers later in the day, Cottrell said, and seemed unfazed by the morning’s incident.

Queen Elizabeth II was struck by eggs hurled by two protesters in Auckland, New Zealand, in 1986. She seemed visibly upset, according to a report at the time, and exited the vehicle she and Prince Philip had been riding in that day. She later regained her composure and gave a speech to the tens of thousands of students who had assembled that day to see the royals.

Those suspects were protesting the Treaty of Waitangi, signed in 1840 between Great Britain and a number of Maori chiefs. The two women were booked on charges of assault and disorderly behavior. Joey Lawrence, The Masked Singer’s Walrus, Had A Hit Way Back In The 90s Latest News