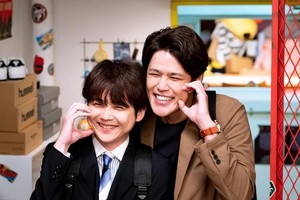 Ever wanted to see your favorite voice actors act as a couple onscreen? The popular male voice actors Yuuki Kaji and Mamoru Miyano guest starred as a side couple in episodes 3 and 4 of TBS‘ Kimi no Hana ni Naru (Becoming Your Flower) live-action drama.

The story of Kimi no Hana ni Naru follows a former high school teacher played by actress Tsubasa Honda. She becomes the matron of a boy group named 8LOOM. Miyano plays the group’s manager Kenji Soegi. In episode 3, Soegi calls for his boyfriend Toshi, a public servant whose hobby is cleaning and tidying up, to help clean the dorm before a TV crew visits for an interview.

Yuuki Kaji might be best known as the voice of Attack on Titan protagonist Eren Jaeger and icy hot hero Shōto Todoroki from My Hero Academia. His numerous anime roles also include Meliodas from The Seven Deadly Sins, Sabito in Demon Slayer, Speed O’Sound Sonic in One-Punch Man, and Issei Hyōdō in High School DxD.

In real life, the two actors are happily married to separate partners. Last Thursday, Kaji announced that he and his wife Ayana Taketatsu, also a famous voice actor, welcomed their first child. Miyano announced his marriage in 2008.