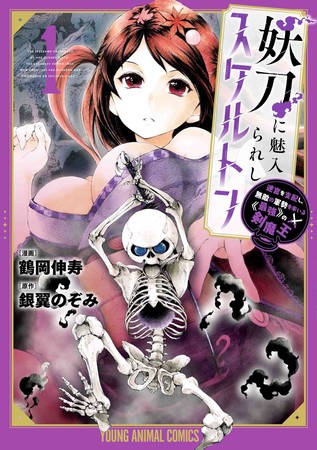 This year’s December issue of Hakusensha‘s Young Animal Zero magazine revealed on Wednesday that Nobuhisa Tsuruoka’s manga of Nozomi Ginyoku‘s Yōtō ni Miirareshi Skeleton ~Meikyū wo Shihai, Muteki no Gunzei wo Hikiiru “Saikyо̄” no Ken Maо̄ (The Skeleton Enchanted by the Cursed Blade: The Greatest Demon Lord, Who Conquers the Dungeon and Commands an Invincible Army.) story is entering its climax.

The story follows a skeleton who gains power from a sword to become a demon king who rules over the labyrinth and leads an invicible army.

Yen Press licensed Ginyoku’s I’m a “Behemoth,” an S-Ranked Monster, But Mistaken for a Cat, I Live As an Elf Girl’s Pet (S Rank Monster no “Behemoth” dakedo, Neko to Machigawarete Elf Musume no Pet Toshite Kurashitemasu) light novel, as well as Tarō Shinonome‘s manga adaptation of the novel, both of which debuted in March 2018. The manga debuted in Young Animal Arashi and was then serialized in Young Animal.