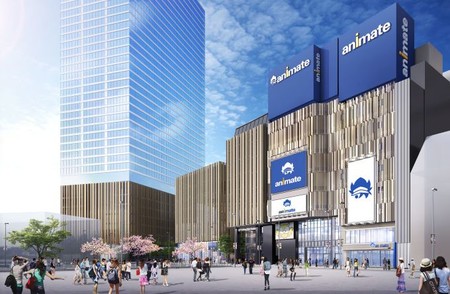 The Animation Business Journal reported on Saturday that Animate‘s main Ikebukuro store will have its grand reopening on March 16. The store is expanding to become the “world’s biggest anime shop.” The new expansion will be built at the site of the former Ikebukuro Public Health Center and will be integrated with the current store.

The building will have 10 floors, including a basement floor. The store will offer interactive experiences and services alongside anime and manga-related merchandise. The floor plan includes an event hall, theater space, exhibition area, and a café.

The reopening was initially scheduled for spring 2023, Animate‘s 40th anniversary. Animate hopes that its expanded store connects people who love anime from around the world and helps them experience anime culture as their hearts beat with excitement. The store will adjoin the Hareza Ikebukuro commercial complex.

Animate Ikebukuro, the first store and headquarters, opened in front of Ikebukuro Sunshine City in March 1983. The Animate Ikebukuro main store was reopened in November 2012. The chain boasts over 120 stores worldwide, including branches in mainland China, Taiwan, Thailand, and South Korea.