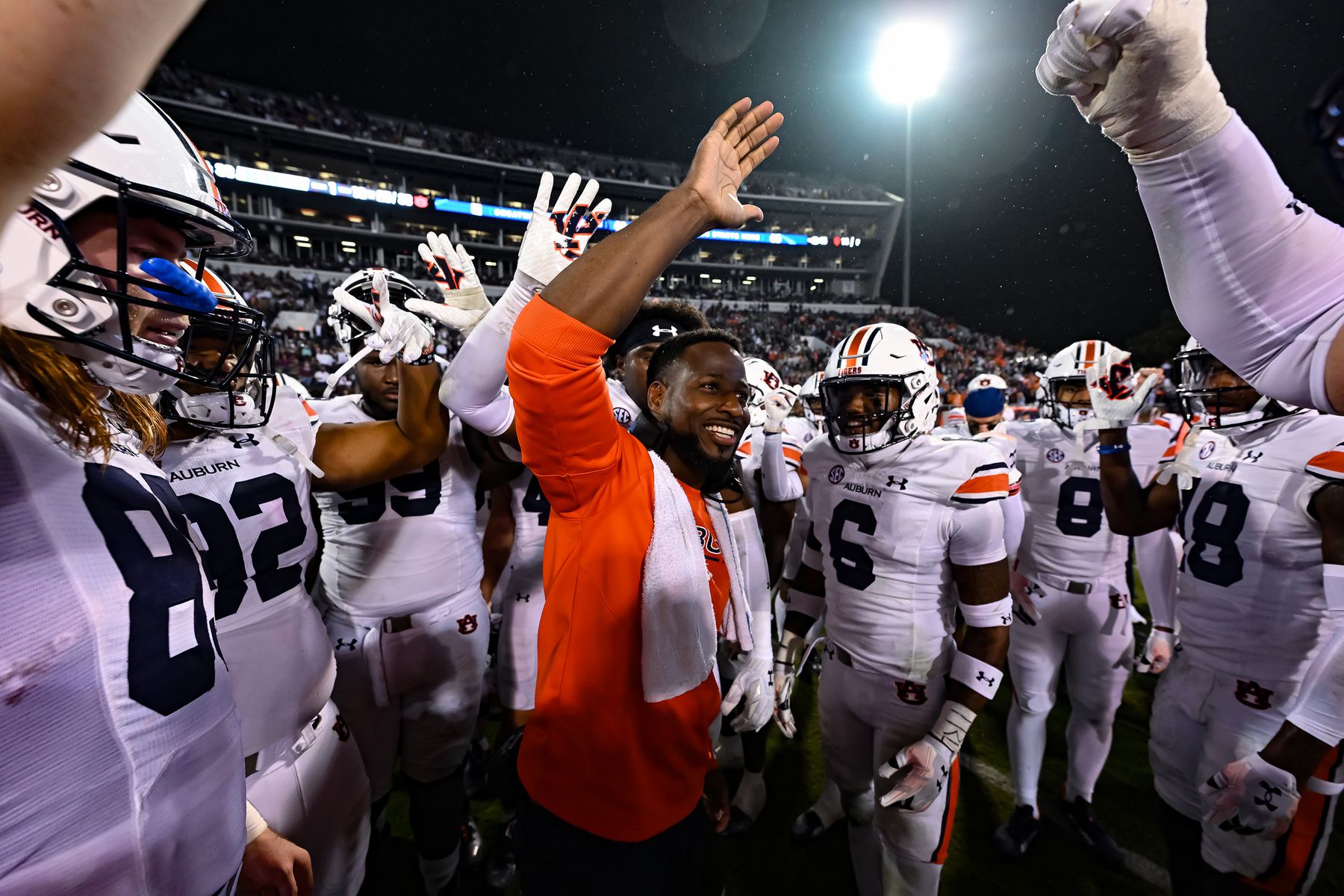 Cadillac Williams enters the second game of his tenure as Auburn’s interim hoping to turn outscoring Mississippi State 27-9 in the second half of last week’s 39-33 overtime loss into a complete four quarters against Texas A&M. Auburn (3-6, 1-5 SEC) announced a sell-out on Wednesday for Saturday’s 6:30 pm CT game Texas A&M (3-6, 1-5 SEC) on SEC Network.

A quick walk inside the Auburn athletic shows the new mantra for the program from Williams in bright lights reflecting the ebullient energy in the building since Williams took over as interim coach. Serve, Believe, and Discipline are spelled out with illuminating lights and is visible upon walking inside.

Williams told reporters he added the discipline aspect before Saturday’s game. He’s hoping it’ll sink in for his team seeking to snap a five-game losing skid against an Aggie team also thirsty for a win.

“One thing that we got to do is we got to be more disciplined,” Williams said. “We had, what, 14 penalties for 115 yards (against Mississippi State). We got to be more efficient on third-down offense; we were 6-of-18. We got to buy Robby (Ashford) in better situations to be an effective passer; he was 7-of-22, and a lot of that—like I told those guys—a lot of that falls on us coaches. We must put these kids in a better position to execute our game plan. So, we’ll be better this weekend.”

Starting quarterback Ashford ran for 108 yards and two touchdowns against the Bulldogs. Ashford, Tank Bigsby, Jarquez Hunter, and freshman Damari Alston combined for 256 yards on the ground in the near comeback win. Hunter and Bigsby scored fourth-quarter touchdowns that each gave the Tigers leads.

Williams credits the offensive line for the resurgence of Auburn’s running game.

“They’re playing Auburn football,” Williams said. “Then, honestly, just overall the offense, it’s a mindset. It’s the mindset, fight or quit. That’s the mentality this whole team is taking on, especially on offense; it’s fight or quit. Us not watching the scoreboard, us playing good, clean football, and I think those guys in the trenches, a lot of credit needs to go to those guys because they are giving these backs.”

It’s no secret that Auburn’s recruiting ranking was as much if not more important than Bryan Harsin’s 9-12 record as to why the school parted ways with him. Williams told reporters on Monday that he’s trying to keep his emotions in check as he runs onto the field as Tigers head coach at the stadium where he made his name as a player. He’s also hoping the energy from the crowd will impress a large contingent of recruits coming to visit campus this weekend.

“I know a lot of people are trying to see how this team is gonna respond, with the effort they put forth last week,” Williams said. “But one thing I hit with these guys is we’re going to level up, and we’re going to take this thing onto another level, but we’re excited about the bunch of guys we got coming on campus, and we are looking to get in front of this home crowd and bring the energy, and hopefully get a W, somehow find a way to win.” SEC Football by the Numbers: Top 10 for Week 11 Latest News