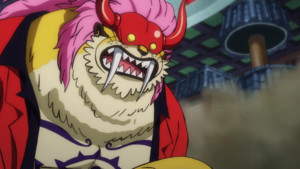 One Piece episode 1039 is another one of those very, very “Wano” entries: in other words, there is nothing inherently wrong with it, but your enjoyment of it will depend greatly on whether you are satisfied by the characters who are in focus.

As for myself, this episode kind of dragged. There are simply so many fights happening in so many locations that all hit on roughly the same emotional beats. Jinbei versus Who’s Who and Sanji versus Queen and Franky versus Sasaki and Usopp versus…well, you get the point. Any given scene from this episode has a 75% chance of leading into a Straw Hat pirate running down a hallway and/or grimacing at a strange monster man. It’s not that any one fight is poorly done, or that they don’t have interesting quips bandied back and forth. The problem is that there are literally four of them happening at once (on top of all the other battles happening across Onigashima), and none of them really gets time to grow or be distinct.

Ultimately, it’s four of the same scene that all end up in the same place more or less.

There are some standout moments though. Sanji battling Queen is exciting when the action is going, and these fights have a great sense of verticality with Sanji’s airborne skills and Queen’s long neck. It’s also nice getting to see Chopper do doctor stuff, since he is the ship’s doctor after all. I do wish these scenes had a bit more tension to them though. Chopper being a funny little old man version of himself is silly fun but does not seem to impact the scene much at all. Zoro makes his grand declarations, but that is only partially effective here – the giant crucifix body cast is great for comedy, but a poor fit for this more serious moment.

And this is all under the knowledge that Wano has a long, long way to go. Buckle up folks.

One Piece is currently streaming on
Crunchyroll and Funimation.com.