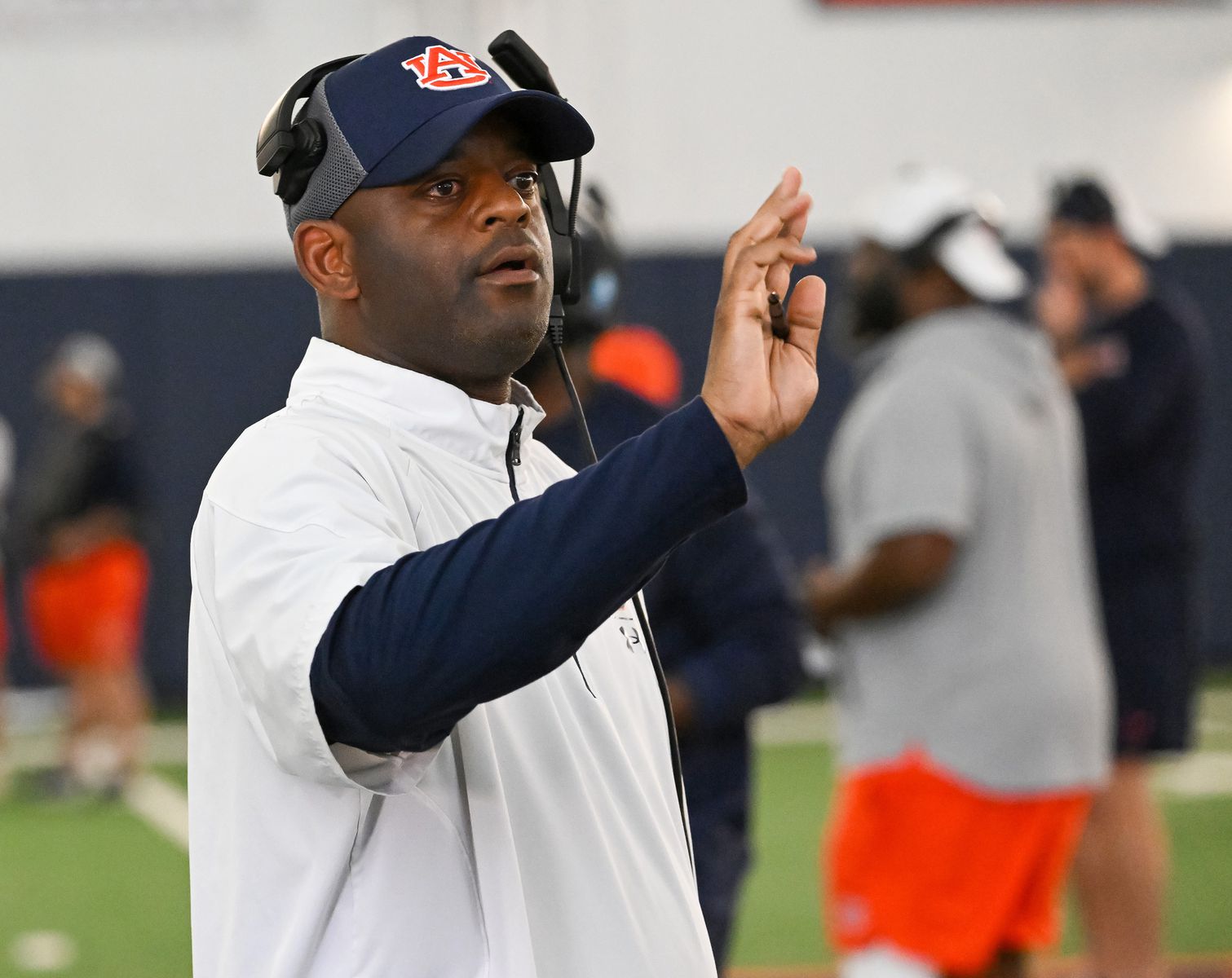 Cadillac Williams presented a challenge to his coaching staff during their Monday morning meeting that may have been his biggest ask of them yet during his short tenure as Auburn’s interim coach.

He wanted them to carve out time for self-care: sleeping, eating, working out. There wasn’t much time for any of that during last week’s hectic series of events — beginning with the firing of Bryan Harsin and six football staffers — that led to a frenzied week of preparation that saw the coaching staff piecing together a gameplan on the fly, working in the athletics complex until 1 or 2 a.m. each night.

“Last week was a rare one,” Williams said.

This week should see more of a return to normalcy for Williams and the rest of Auburn’s coaching staff, particularly on the offensive side of the ball. Along with Harsin’s firing last week, Auburn lost offensive coordinator/quarterbacks coach Eric Kiesau and tight ends coach Brad Bedell. That prompted a restructuring of the Tigers’ remaining offensive assistants, with every coach taking on new or expanded roles leading up to the Mississippi State game.

Offensive line coach Will Friend and wide receivers coach Ike Hilliard assumed co-offensive coordinator duties, as the two worked in tandem developing an offensive gameplan and calling plays on Saturday. That was no small task, as they had to quickly familiarize themselves with a play-sheet that wasn’t their own. At one point during the Mississippi State game, after a timeout, Friend sat down behind the training table on Auburn’s sideline and pored over the play-sheet to try to get up to better understand the calls and where everything was on the laminated sheet of paper.

Despite being put in a tough situation, Williams heaped praise on how Friend and Hilliard handled their circumstances. Auburn’s offensive gameplan was far from perfect, and it wasn’t always pretty, but the Tigers overcame a slow start and an absent passing game to score 33 points on the road while rallying from a 21-point first-half deficit.

“Them guys are like football junkies,” Williams said of Friend and Hilliard.

With that duo running the offense, and Williams overseeing the whole team, Auburn elevated offensive analysts Kendall Simmons and Mike Hartline to offensive line coach and quarterbacks coach, respectively. Joe Bernardi took over the tight end group, and Jeff McDaniels assisted with the running backs to ease the load off Williams.

“I’ve got full confidence in that offensive staff and the guys that I’m working with,” Williams said. “Honesty, they make my job a lot easier where I can kind of try to do this head coaching thing and touch our players.”

In the Tigers’ eventual 39-33 overtime loss to the Bulldogs, after falling behind 24-3 in the second quarter, Williams and the rest of the staff delivered a message of “fight or quit.” Auburn’s players chose to fight, turning in their best offensive second half of the season, while the defense largely stood tall after some early struggles against the Air Raid.

Auburn particularly found success on designed runs for quarterback Robby Ashford and some explosive carries from Tank Bigsby and Jarquez Hunter, as the team finished with 256 rushing yards and four touchdowns on the ground while averaging 5.57 yards per carry. It was Auburn’s second-best rushing performance of the season against Power 5 competition, trailing only the Ole Miss game before the bye week.

Williams anticipates the offense will look better this weekend, with a full week of preparation before Auburn hosts Texas A&M on Saturday night at Jordan-Hare Stadium. The staff will have a normal week of prep to watch the Aggies and formulate an optimal gameplan. Williams is optimistic that as things settle down, the Tigers will be able to avoid another slow start like the one they had in Starkville.