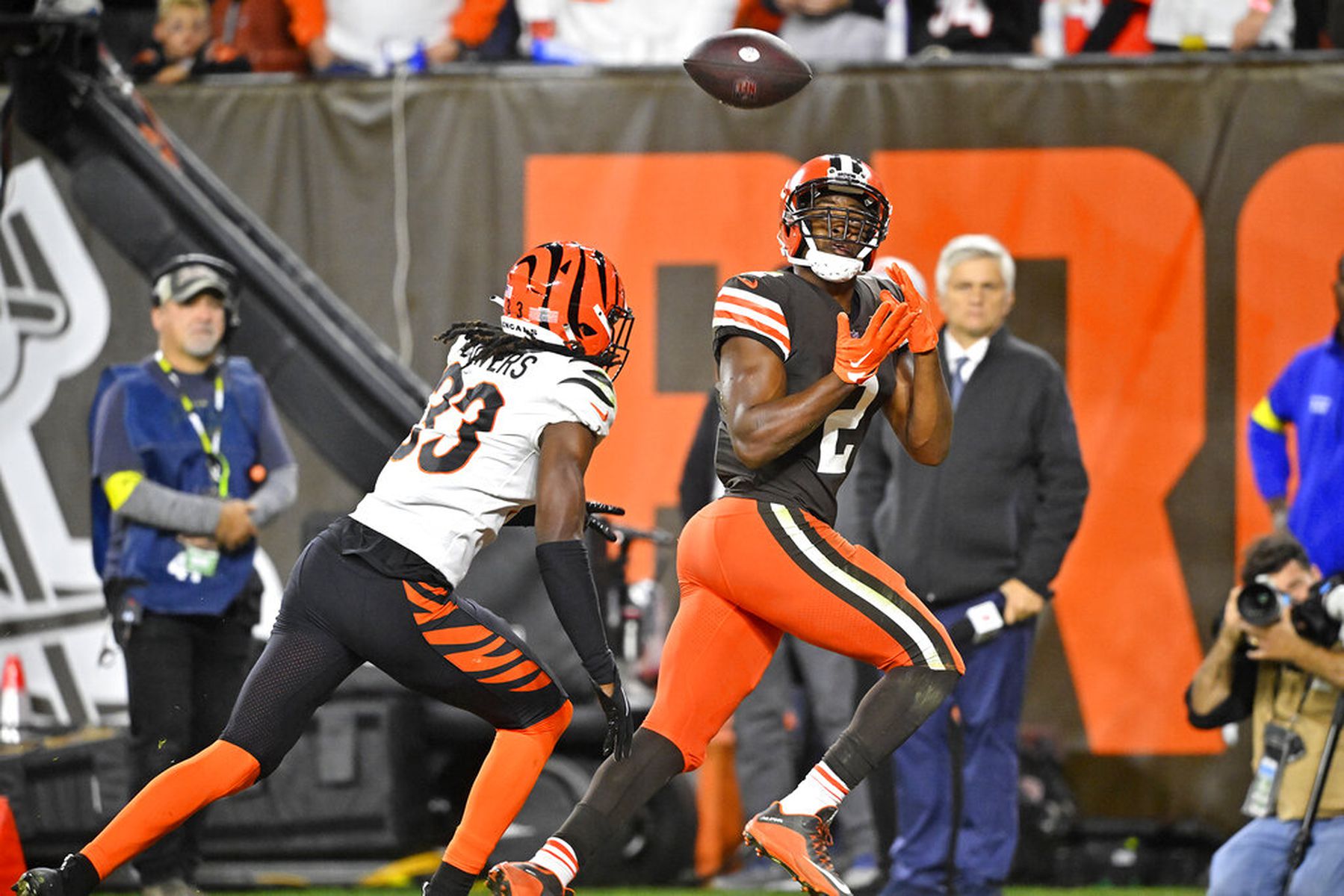 Except for his debut as an NFL passer, Cleveland wide receiver Amari Cooper thinks the Browns came out of their most recent game headed in the right direction as they prepare to play the Miami Dolphins on Sunday at the midpoint of their 2022 NFL season.

Cleveland is coming out of its bye week. The Browns beat the Cincinnati Bengals 32-13 on Oct. 31 in their previous game.

“You’ve been the league long enough, you know that a big component of it is momentum,” Cooper said, “so this is a great momentum game for us, and, hopefully, we can build on it. …

“Obviously, we got some things to work on, and that’s why we practice and go back to the drawing board. But this is a good game to build off of.”

On Cleveland’s second possession against Cincinnati, the Browns send in a pass play for Cooper – not catching one, as usual, but throwing the football.

“I was very excited,” Cooper said. “I saw it on film work a couple of times. It was bad. Much respect to Jacoby (Brissett) and all the quarterbacks out there because they got a tough position. …

“I’m just going to stick to getting open. That’s it.”

Cooper took a pitch from running back Nick Chubb as though Cleveland had called a reserve. Cooper has 14 rushing attempts in his NFL career. But this time, the former Alabama All-American pulled up and threw the football – right to Bengals safety Vonn Bell.

“It was an abomination, really,” Cooper said. “It kept running through my mind: OK, if he’s not open, throw it away. I didn’t really realize how hard it was to throw the ball away because that’s what I tried to do. I did not try to throw it to him. …

“Don’t have me throwing too many more passes out there.”

Cincinnati didn’t do anything with the turnover and punted the football back to the Browns on a three-and-out as the game remained tied at 0-0.

Cooper went on to catch five passes for 131 yards and one touchdown in the game. He had a 53-yard reception to the Cincinnati 11-yard line in the fourth quarter to set up Cleveland’s final touchdown. He had scored the Browns’ previous TD on a 4-yard reception as Cleveland took a 25-0 lead with 3:10 left in the third quarter.

“Obviously, it was clear that it was my fault,” Cooper said. “It feels like the whole world is watching you when you make a bad play like that. I’ve been in the league a while now, so I know how to keep my composure. I’m just glad they weren’t able to capitalize off the mistake and the turnover because at that point you think you’re really costing the team.

“That was in the first quarter, so I understand the games are long. You have ample opportunities to make up for the bad plays that you made, so I was really looking forward to doing that. I was able to make some more plays. We really just played complementary football, so it was really the team that looked out for my mistake, so I’m glad about that.”

In his first season with the Browns, Cooper had his third game with at least 100 receiving yards and one receiving touchdown of 2022. Josh Gordon in 2013 is the only Cleveland player with more such games in one season with six. Cooper joined Gary Collins in 1965 as the only Browns to have three 100-yard receiving games with at least one TD catch in the first eight games of a season.

“He’s a consummate professional, and he’s a talented football player. For his size, the way he’s able to come in and out of breaks, he wins downfield, he can obviously win at the line of scrimmage, tracks the ball well, so great player – I think that’s the obvious part – but he’s a really, really, really good pro.”

The Browns head to Hard Rock Stadium in Miami Gardens, Florida, for Sunday’s noon CST game with a 3-5 record after breaking a four-game losing streak by beating the Bengals.

The Baltimore Ravens top the AFC North at 6-3 with Cincinnati at 5-4. Behind Cleveland are the Pittsburgh Steelers at 2-6.

“You’ve been the league for a while, you kind of understand the ebbs and flows of the season,” Cooper said, “and one thing that’s a fact is: The season is very long. And strange things have happened. …

“We’re very optimistic, and, as I’ve said before, we really believe in the players that we have in the building and the personnel, so I think we’ll be all right.”