“The good news is that we are halfway to making a true NerveGear. The bad news is that so far, I have only figured out the half that kills you. The perfect-VR half of the equation is still many years out.” 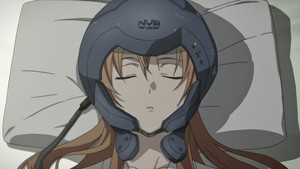 Oculus founder Palmer Luckey unveiled his new pet project on November 6, 2022, the date the fictional Sword Art Online VRMMORPG launched within the series’ universe. Inspired by SAO‘s NerveGear, Luckey is developing a VR headset that can kill its wearer.

“The good news is that we are halfway to making a true NerveGear. The bad news is that so far, I have only figured out the half that kills you,” he quipped. “The perfect-VR half of the equation is still many years out.”

In a blog post titled “If you die in the game, you die in real life.” (a reference to a line from the anime), he wrote that although the SAO counterpart used a microwave emitter to fry users’ brains, his headset uses three explosive charge modules connected to a photosensor. When the screen flashes at a specific frequency—for example, a game over screen—the charges will fire, killing the user instantly.

Luckey noted that the system is not fool-proof, and there are many situations in which the headset could accidentally activate outside of a game over screen. He also noted, “At this point, it is just a piece of office art, a thought-provoking reminder of unexplored avenues in game design.” He added that it could be “the first non-fiction example of a VR device that can actually kill the user” but also declared, somewhat forebodingly, “It won’t be the last.”

He is also working on an anti-tampering mechanism that would prevent others from removing or destroying the headset.

Sword Art Online author Reki Kawahara is well aware of Luckey’s fascination with the series—the bottom of the blog post shows an illustration Kawahara drew for Luckey’s wedding, which depicts him and his wife as Kirito and Asuna respectively.

Luckey founded Oculus VR in 2012 and sold the company to Facebook in 2014. In 2017, he left the company, later suggesting that he was fired because he supported Donald Trump in the 2016 U.S. presidential election and provided funding for a pro-Trump group. He subsequently founded Anduril Industries, a defense contractor company focusing on drone technology.

Outside of politics, Luckey is known for his anime girl opinions and cosplay.