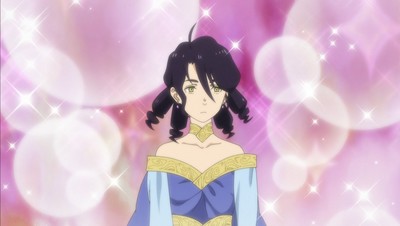 Do any of y’all remember Karakuri Circus, that absolutely bug nuts anime from 2018 about magical fighting circus puppets and evil automatons? Don’t worry, I don’t blame any of you for completely forgetting that the series ever existed; hell, I’m the guy who reviewed the show for several months, and even I have to remind myself that the time I spent with it wasn’t some deranged fever dream. Anyways, I’m only bringing up the show because watching the last few episodes of To Your Eternity has given me such a strange sense of déjà vu, and this week I was finally able to nail down what it was reminding me of: The experience of watching Karakuri Circus

To be clear, I’m not saying that To Your Eternity is heading down the same car-crash path of rushed adaptation and botched storytelling that plagued Karakuri Circus, but the two shows do have a lot in common when it comes to both their general strengths and their increasingly glaring flaws. Both have solid world-building and endearing characters that get you invested in the overall narrative, and both deal with vast spans of time and a giant cast of heroes and antagonists that give the tale a genuinely epic feeling that is hard not to be swept up in. Sadly, To Your Eternity is also demonstrating Karakuri Circus‘ bad habit of speedrunning through a lot of fascinating and meaningful material to get its plot and characters up to speed. However, in TYE‘s case, I suspect the issue is not rooted in having to obliterate huge chunks of its source material like Karakuri Circus did; I think Fushi’s story is just inherently prone to missing the trees for the forest, given the scale and scope of his mission against the Nokkers.

For instance, take the characters that aren’t Fushi or the The Beholder. In TYE‘s first arcs, we spent a lot of time with each of Fushi’s companions, which allowed us to get invested in the world they lived in, meaning the show was able to strike a great balance between story progression and character development (even if it did maybe take a little too long for Fushi to become fully self-aware). The Jananda Arc was the story’s biggest obstacle, taking an egregious amount of time to get Fushi through a personal journey that lacked engaging character interactions or world-building; now, in Season 2, the show is having the opposite problem. Fushi’s curse of immortality has fully resigned him to become detached from the world, which means that not only does every character’s death feel as inevitable as ever, we can’t even be certain that our time spent with them will amount to much more than a glorified info-dump or an accelerated plot montage.

All of this is to say that I wanted to fall in love with Kahaku, who is a refreshing change of pace so far as the Hayase reincarnations go, especially since his crush on Parona!Fushi is both incredibly obvious and charming for once. I can’t say that I have as much love for (sigh) Bonchien Nicoli la Tasty Peach Uralis because his obnoxious and genuinely insane shtick feels like it belongs in a completely different show. Still, I can’t deny that he’s brought a very, er, “novel” charm that Fushi’s story has been lacking ever since he arrived in Jananda. I find myself holding all of them at arm’s length, though, because nothing about this season has convinced me that these characters’ stories will be allowed to breathe and have the impact they should before they’re unceremoniously killed off in…I dunno, what bets do we want to take? One more episode? Maybe two?

This brings me back to another fatal flaw that To Your Eternity shares with Karakuri Circus, and that is how even if either show was able to use its accelerated pacing and bonkers plot developments to their advantage, it can’t ever amount to much when the production values can’t bring that story to life. Karakuri Circus at least had Kazuhiro Fujita‘s striking character designs to carry along its limited animation, but “The Awaited” is yet another unfortunate reminder that TYE’s art does not translate well to animation unless the visuals are rock solid. The visuals in “The Awaited” are not rock solid. Between janky storyboarding, some truly baffling edits, and a general sloppiness to the character art and animation throughout, I just never found myself believing in most of the emotions on display…unless those emotions specifically involved Tasty Peach’s gyrating ass cheeks, which isn’t necessarily what I come to TYE for, you know?

Then again, there’s the final point that I think TYE and Karakuri Circus have in common, which is that their stories are so interesting and affecting at their best that I want them to overcome those hurdles, because they could be so great. I’ve long since lost hope that To Your Eternity will achieve the same artistic heights as its incredible first episode, but I do not think it’s too late for the series to scrape together a consistent degree of goodness. There are flashes of it still, even now, but anime, unlike Fushi himself, is anything but eternal. I hope the show can find its way before its time on this Earth is well and truly over.

To Your Eternity is currently streaming on
Crunchyroll.


James is a writer with many thoughts and feelings about anime and other pop culture, which can also be found on Twitter, his blog, and his podcast.