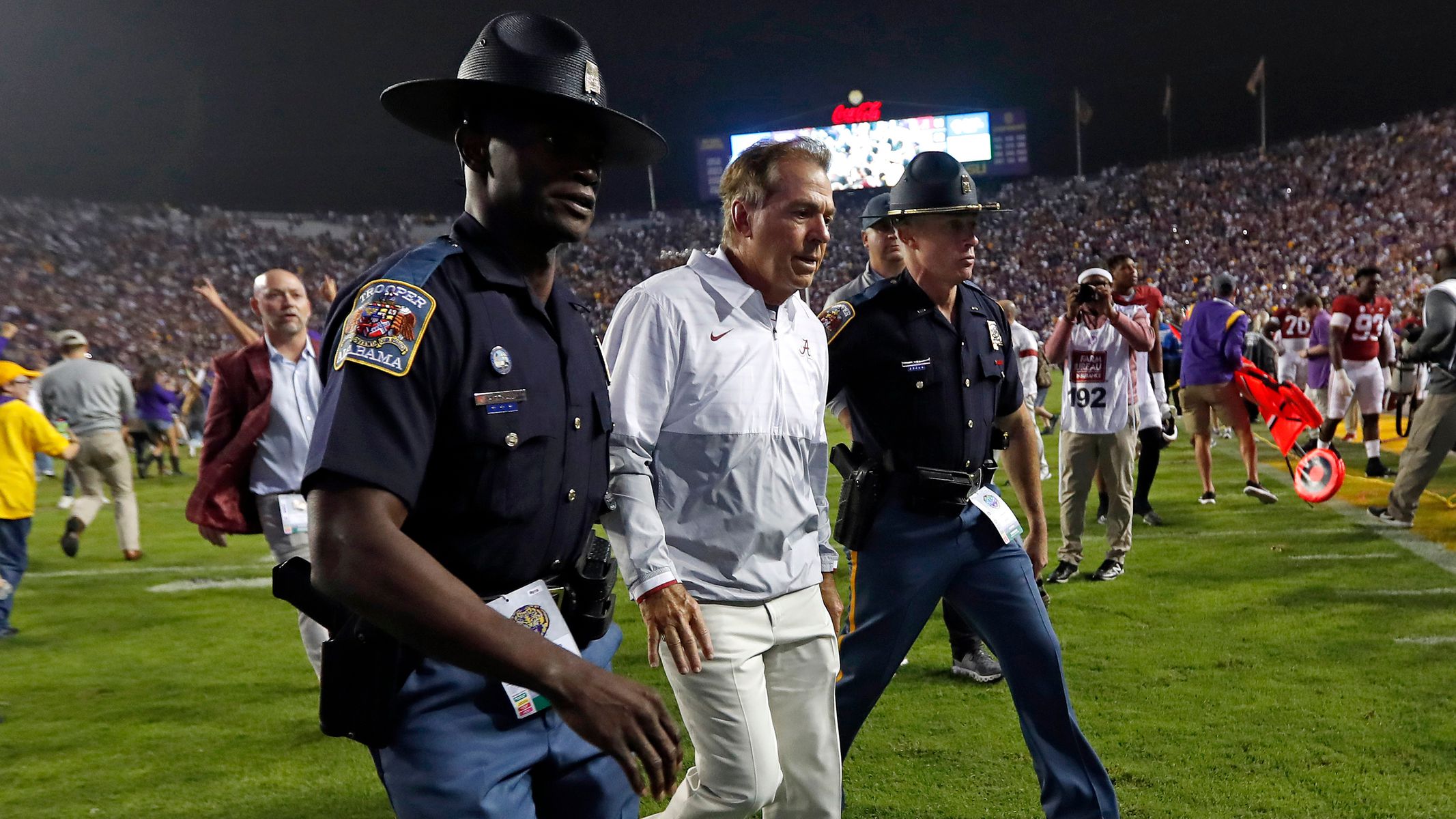 Alabama took its second loss of the season Saturday night in overtime in Baton Rouge, which means it will not be playing in the College Football Playoff barring an improbable run to an SEC championship.

LSU has the inside track to Atlanta after its victory and would need to lose both of its remaining SEC games against Arkansas and Texas A&M for the Tide to stay alive in the SEC West.

Here is what Nick Saban said after emerging from the second field-storming in a visitor’s stadium Alabama has experienced in the past three games:

— Saban began by saying it would be an “understatement” to say the team is disappointed. “We all are,” he said. “Guys really competed hard in the game today. It’s a tough environment, tough place to play. You got to give LSU a lot of credit for making the plays they made when they needed to make them.

— “We hurt ourselves quite a bit in the game, especially early on,” Saban said, noting Bryce Young’s end-zone interception after a “great” opening drive. He also said Alabama settled for too many field goals and committed too many penalties.

— “I think everybody kind of needs to kind of check their goal card and what we need to do to individually improve your stock to finish the season the right way, as well as have a goal of having to try to win 10 games,” Saban said, noting the program has won 10 games every season since 2008.

— Saban: “I like this team. I think this team is very capable. I think if we played with a little more consistency — sometimes we beat ourselves too much and it’s kind of hard to overcome. It’s a tough loss, but there’s nobody that feels worse about it than our players do. They work their tail off, they compete for their tail off and they just came up a little bit short.”

— Asked about being pleased with his team’s preparation and the disconnect between that and their performance in the game, Saban responded, “I don’t think there was a disconnect,” noting the ball movement on the offense’s opening drive. “Just turned the ball over.” Saban said the defense played “really well” in the first half, better than the second half. Saban said they need to develop more consistency in being able to run the ball better.

— Saban thought Bryce played a “really good game” and “made a lot of plays,” including an “unbelievable play” on his touchdown to Ja’Corey Brooks.

— Saban said the defense did not “peel the guy” on LSU’s first touchdown. “It’s a mental error.”

— “Players got to be able to do their job and be able to execute. If you don’t, you usually pay for it when you play against good teams, and that happened a couple of times today.”

— Asked if the offense ran the ball enough, Saban said they had bad field position and “struggled to run it when we tried to run it.” He added, “I’m not going to second-guess what we did in the game. I don’t think really had — we had a chance to win in the end. Whatever we did, we put ourselves in position to do that and just came up short.”

— Saban said they did a good job keeping Jayden Daniels contained in the first half but he made significant runs in the second half when “we didn’t fit it exactly right.”

— “Look, I can’t blame the players. I’m responsible for all this stuff. If we didn’t do it right, that’s on me. We got to do a better job of coaching the players so we give them a better chance to have success and when we have opportunities, we take advantage of them.

— Saban said he “wasn’t” expecting LSU to go for two at the end, but said they played what they would have played against LSU’s two-point conversion offense, which would have been necessary later in overtime. “We had a chance to stop the guy, so it wasn’t like we didn’t have him covered. If we kept him out, we would have won the game.”

— Saban: “These guys care about this team. When you play in a game like this, all you got is the guys you got. But that’s really all you need if you do things together and you do it the right way. I was proud of the way our guys competed in the game, we just didn’t make quite enough plays when we needed to, and didn’t make the play at the end of the game.”

— Saban said you have to play well on the road if you want to win the SEC West. “Our side of it has a lot of good teams, and we’re going to play another good team next week” in Ole Miss, he said.

— Saban said Alabama’s pair of two-point conversions in regulation, which both failed, were based on the chart that said both made sense in the situations.