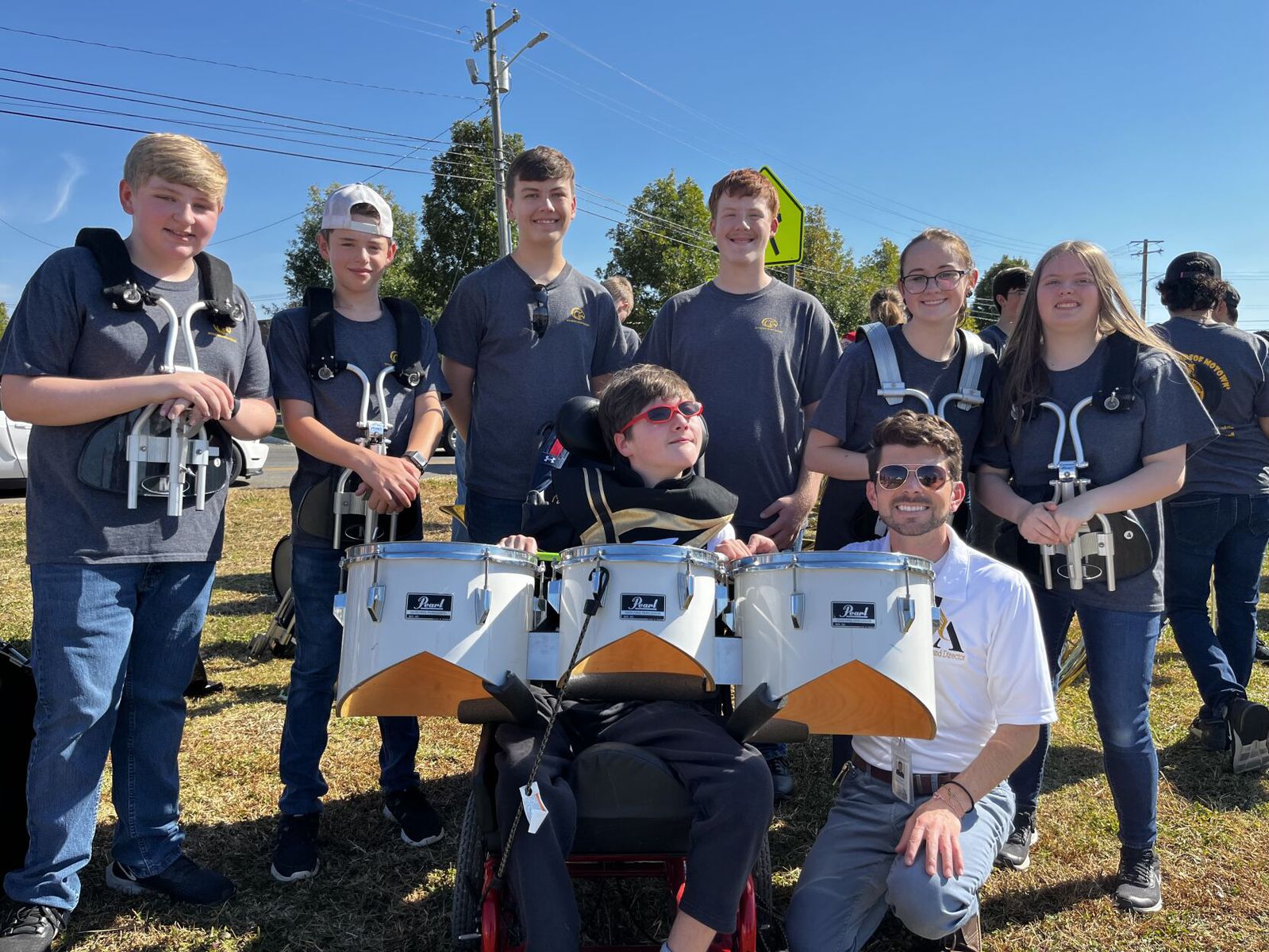 For decades, the Athens High School Marching Band has been entertaining and energizing crowds under the bright Friday night lights. Countless hours of dedication and practice go into each song played and each show performed. Athens student, Jake Hodges, was up for the challenge and, despite some limitations, quickly solidified his place in the AHS drumline.

Since birth, Jake has been nonverbal and non ambulatory, but his father Jeremiah points out that it is wrong to think his son can’t communicate with others.

“He has always been drawn to music in every capacity, and music is very soothing to him. For years, he has loved to play instruments. He has a keyboard in his room. He has a full TAMA rockstar drum kit,” Jeremiah said.

Jeremiah admits he, too, has underestimated Jake’s ability.

“I mistakingly believed that he was not strong enough to play at such a volume that we would get to enjoy (the drum kit) through the rest of the house. I was very incorrect when it comes to that,” he laughed.

Seeing how much he loves music, Jake’s parents, Jeremiah and Jenny, presented him with the opportunity to join the band in middle school, and that’s where Jake thrived.

“He participated in various degrees of band since he was in middle school. He’s taken band classes, but he had never done marching band until this year, which quite honestly, I regret. He’s done concert band and he’s enjoyed those things, but with this new band director, Mr. Parker, I didn’t know Ty and had never met him,” Jeremiah said.

Jake’s parents learned that he had an opportunity to march in the Christmas parade with the band. Jake had participated in the parade before, riding with his father’s business. He always enjoyed it but this would be different and, in the end, it would be great.

“I took parts of his drum set and bungee corded it to his lap. We walked through the parade, and he had a big time,” Jeremiah said. “A lot of people who knew him from the community saw him and cheered for him. Jake is the world’s biggest ham. When he thinks people are cheering and clapping for him, he turns on that charm. Smiles real big and sticks his chin out – you can just see the pride and the joy he feels when he is being applauded or cheered for.”

Having excelled in concert band and the Christmas parade, this year, Jake was ready to give marching band a try.

Jeremiah said, “I was really uncertain. I knew he would like playing the drum because that boy, if he’s awake, he wants to be playing the drum. I didn’t know how it would go with a child with some limitations. I’ve grown accustomed to having to be kinda pushy and insist on him being able to participate in things. That’s just the nature of the way the world goes. What we wanted was Jake to get to participate in the best possible way he could.”

“I was trying to figure out the right way to do this. Mr. Parker, I think, finally stopped me and said, ‘Jeremiah, Jake can do whatever Jake wants to do. If he wants to travel with us, he’s welcome. If he wants to go to competition with us, he’s welcome.’ The plan was to just participate in home games, but after the first game, he loved it so much, they began traveling to away games. As a matter of fact, I am planning on taking him to Russellville Friday night because he loves it so much,” he said.

It was important to the Hodges that Jake not be seen as a “mascot” or participating in an effort for someone else to be “checking a box.”

“That’s been quite the opposite experience that we’ve had with the Athens Band. His band director (Ty Parker) and his drumline leader (John Deemer), I have told everyone that will listen: they don’t tolerate Jake’s participation, they are enthusiastic about Jake’s participation. They want him to be a part of what’s going on. You can see that through the other kids,” Jeremiah said.

“The band and I are thrilled to have Jake involved with the Pride of Athens Golden Eagle Marching Band. The energy and enthusiasm created by both Jake and his family have helped our band program tremendously as we continue to grow,” AHS Band Director Ty Parker said.

As marching season approached, the Hodges remained realistic and were aware that there could be some challenges to Jake’s participation in the marching band, for both him and his dad.

The first game came, and everyone was “feeling their way through and making adjustments.”

Jeremiah added, “We figured out, after the first game, we don’t need Jake out in the middle of the formation and me steering him the wrong direction and getting in somebody’s way, so we put him in the pit. He gets to be on the same field his momma performed on twenty years ago and playing his drum to his heart’s content. We found a way for him to participate that made sense.”

“Jake has an infectious smile that brings so much happiness to those around him. He enjoys being a part of our percussion section almost as much as we enjoy having him with us,” drumline leader John Deemer said.

This year’s football season will be ending soon. So, will Jake be in the marching band next year?

“100 percent!” Jeremiah said. “I kick myself that he didn’t do it before, but you don’t know what you don’t know. I don’t know anything about band. I have learned so much, never having participated in the band and never having any appreciation for what goes on behind the scenes. I’ve gone to a lot of football games and I was a very mediocre player in high school, and I had no earthly idea what all went into these productions that these teachers and students work so hard to put on. It has been so meaningful for us. This has really been either Jake’s first or best opportunity to be part of something bigger than himself.

He continued, “We’ve tried to give him opportunities to try all kinds of things. Some things he likes, and some things he doesn’t. This, he has just adored. If you could see that kid smile when I help him put on his uniform for band.”

The Hodges have been blown away by the director, drumline leader, other band parents, and students for how Jake has been received. They are especially impressed with one band member in particular.

“Claudia Henson, the drum major, she is a force of nature. She’s got some significant leadership chops. She, just like her director and drumline leader, Jake is a part of her band. She wants him there, and she wants to ensure that he is getting to do what he’s supposed to do. She looks out for him like a good leader would do. She is going to be a success in life,” Jeremiah said.

After not knowing anything about marching band, Jeremiah now has a message to other parents.

“I would 100 percent recommend that any child that has an interest in participating in our marching band seek out that opportunity, because it is a very welcoming community at large. As a parent with a child with limitations, I understand that a lot of times, it’s an uphill fight. I get that and you almost gotta learn to be a bulldog. It’s just so refreshing to encounter an opportunity where I wasn’t certain how Jake would be received, and he has been received with flying colors.”