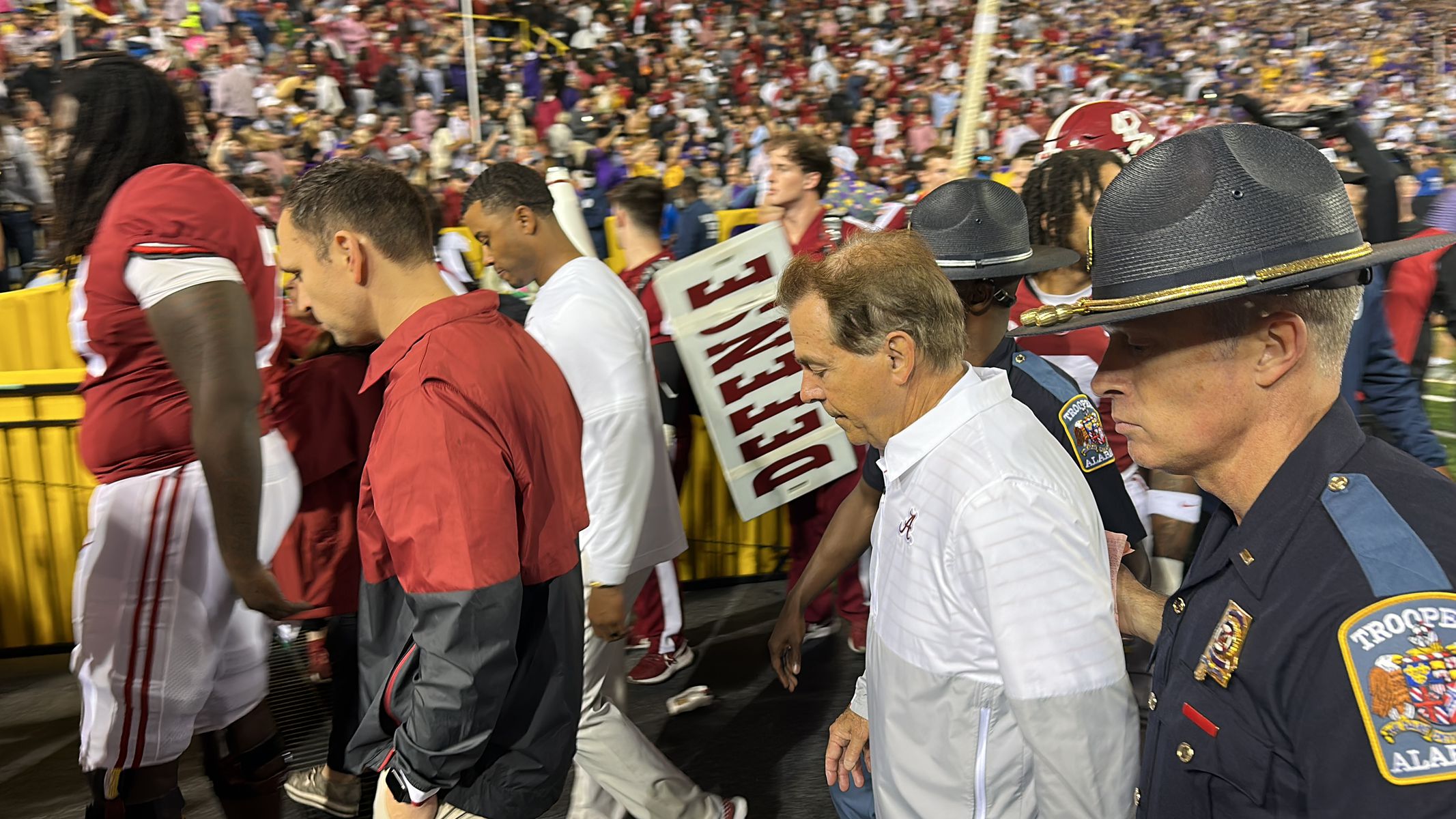 In a chaotic scene not quite unfamiliar at this point, the Alabama football team lost in dramatic fashion as a hostile environment quickly got up close and personal.

The 32-31 loss to LSU on Saturday night saw thousands pour from the Tiger Stadium seats to the field as the Crimson Tide again had to exit the field through traffic. Police said there were fan arrests in the madness, the second time in less than a month when a field storming followed an Alabama road loss.

While there were tense moments in the immediate aftermath, multiple Alabama staffers said it wasn’t as ugly as the scene at Tennessee after the last-second loss to the Vols on Oct. 15. While LSU fans attempted to steal equipment from the Alabama bench, they weren’t as successful as some at Neyland Stadium three weeks earlier.

Emotions were visibly high as Alabama players had to quickly exit following the overtime two-point conversion that won it for LSU. The loss effectively ended any hope of an SEC championship game appearance or another trip to the College Football Playoff.

This was the second time LSU fans rushed the field in the past weeks. It was fined $250,000 for a field storming followed a beating of then-No. 7 Ole Miss. That was the third offense under SEC rules. The school will be fined another $250,000 for this violation as the league announced last week it would revisit the issue of fans entering the playing field after games.

That comes in the wake of an incident on the field after the Alabama-Tennessee game involving Crimson Tide receiver Jermaine Burton striking a Vol fan. Burton was among the first Alabama players into the tunnel Saturday after the LSU loss.

The setup at Tiger Stadium was different from Neyland since the Alabama locker room is located in the corner opposite the LSU student section. At Tennessee, the tunnel was right in the middle of the student seating.

LSU fans accosted Alabama’s Eric Van Nostrand, assistant director of player development as he tried to exit the sideline after most of the team was already safely in the dressing room. Van Nostrand, a Purple Heart veteran and retired Marine had multiple state troopers escort him to the locker room as another officer threatened to arrest the fan.

Moments earlier, LSU fans breached the perimeter surrounding the Alabama sideline and attempted the grab gear but were unsuccessful.

Noise from the wild celebration continued to pierce the walls of the visiting interview as Nick Saban met with reporters before Bryce Young and Will Anderson spoke.

“We were just trying to get off the field,” the somber quarterback said when asked if they felt safe in the dash to leave the field in the wake of the loss.

From there, a police escorted the players back across a public walkway to the locker room so the Alabama team buses could roll out of the Tiger Stadium underbelly. Another high-intensity loss and wild scene greeted the end of Alabama’s national title quest on a soupy night in Tiger Stadium.