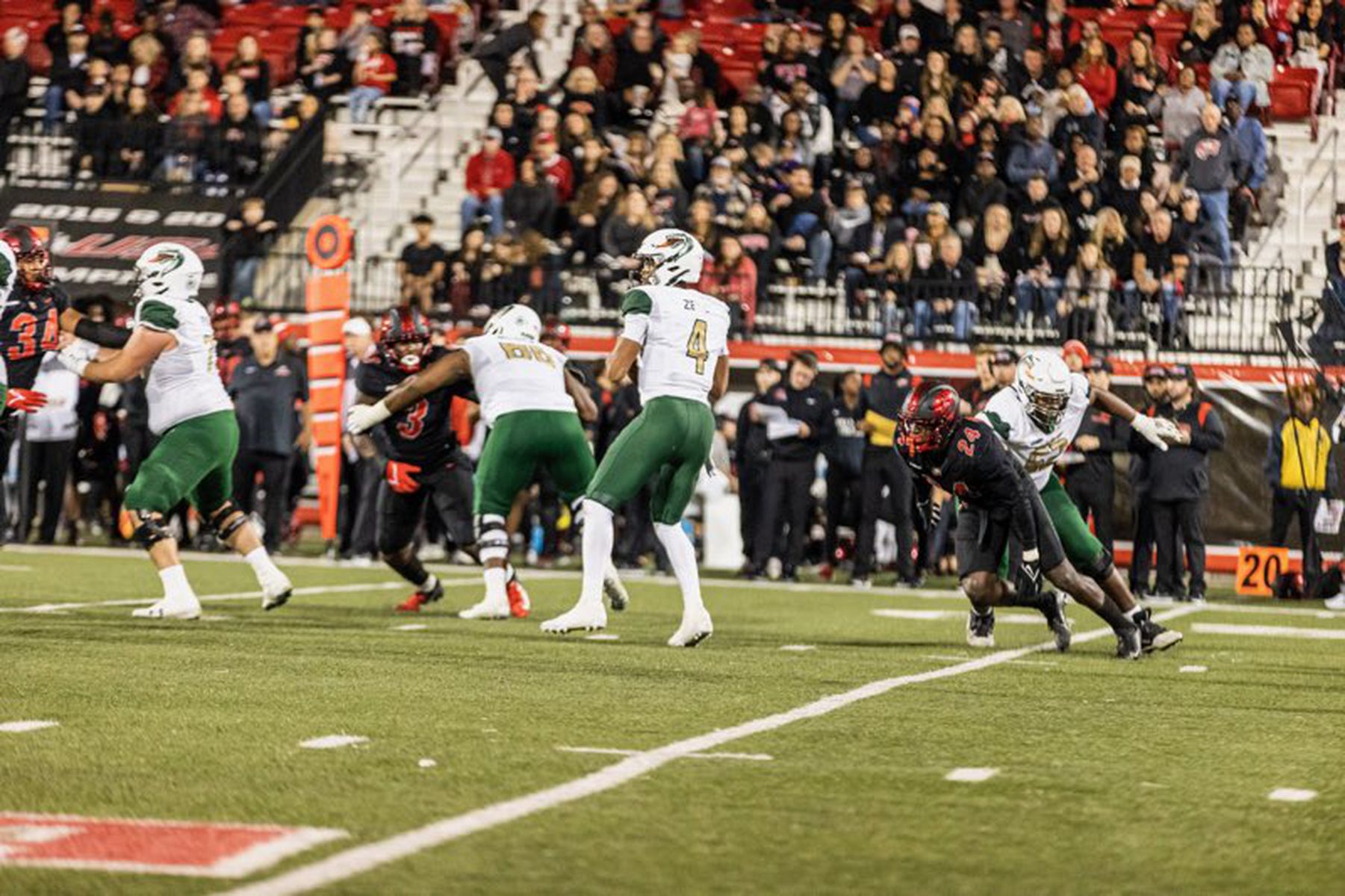 Jacob Zeno had just pulled his team within a single score when the UAB defense provided the quarterback and former Baylor transfer another opportunity to rally and send the game into overtime.

Quickly maneuvering the offense to the opponent’s side of the field, Zeno called Fred Farrier II into motion, leaving Trea Shropshire alone in man coverage on the left boundary, and fired an arcing pass over the defense into Shropshire’s breadbasket for a game-tying 38-yard touchdown pass.

“As soon as we motioned over, the field safety rolled to the middle, and it was one-on-one with Shrop,” Zeno said. “I just did my job, kept my eyes in the middle of the field to make sure he stayed over and give me a good opportunity.”

A 14-yard scoring strike to Tejhaun Palmer in the first overtime session gave UAB a quick lead but a third-down sack and incomplete pass from Zeno on fourth down brought an end to the Blazers as they fell 44-38 in double overtime to UTSA, Saturday, Nov. 5, at Protective Stadium in Birmingham.

UAB falls to 4-5 overall with all five losses coming in one-possession games.

“Extremely proud of this football team’s character, of their perseverance, their toughness, and their grit to continue to come out, game after game, and play together and fight until the end,” UAB interim head coach Bryant Vincent said. “There’s no quit in this football team. This football team loves each other. They play for each other and this university.”

Zeno started his second straight for the Blazers, in place of an injured Dylan Hopkins, and finished 27-of-38 for 332 yards, 2 touchdowns and an interception. He added 37 yards and a score on the ground, but was sacked three times on third down.

Facing a 13-0 deficit midway through the second frame, DeWayne McBride got UAB on the board with a 68-yard touchdown run and followed it up by leading a 12-play, 55-yard drive to cut UTSA’s lead to 16-10 entering the halftime break.

The Blazers drove to midfield, stalling on a third-down incompletion, but converted fourth down with Shropshire corralling the ball off a tipped pass from Zeno. McBride took a handoff on a draw two plays later, bounced outside to left, and was brought down out of bounds at UTSA’s 12-yard line. Zeno rushed for no gain, threw two incompletions, and UAB settled for a 30-yard field goal by Matt Quinn.

UAB’s defense forced the Roadrunners into a punt on the first possession of the second half and Zeno guided the Blazers on a grueling 13-play, 90-yard drive to take a 17-16 lead on a 2-yard touchdown run by McBride. Zeno was 2-of-3 for 64 yards on the drive, connecting with Samario Rudolph for a 20-yard pass on 3rd-and-12 and finding Palmer for a 44-yard gain down to the 12-yard line, and McBride finished off the possession with a 2-yard run on 4-and-1 and a 2-yard rushing score.

McBride eclipsed the century mark (141 yards) for a ninth straight game, doing so in all eight games played this season, and currently has 1,287 yards (160.9 ypg) and 14 touchdowns for the season.

Despite taking its first lead of the game, UAB allowed the Roadrunners to surge ahead on back-to-back scoring drives through the third and fourth frames. Trailing 31-17 with less than 10 minutes remaining in regulation, Zeno went to work for the Blazers.

The junior found tight end Bryce Damous for a 33-yard pass on the first play of UAB’s initial drive of the fourth quarter, and followed it up with a 15-yard pass to Shropshire and a 13-yard pass to Jermaine Brown Jr., leading the offense down to UTSA’s 16-yard line. Zeno threw back-to-back incompletions but connected with Rudolph and T.J. Jones on consecutive passes for a 1st-and-Goal at the 1-yard line.

“I’ve seen tremendous growth and tremendous improvement from the Western Kentucky game to FAU, and to UTSA,” Vincent said. “He has been a leader from the day he stepped on campus in January. His leadership has grown tremendously and confidence in his teammates has grown. That’s a great sign of a leader, when people around you flock to you. They play for him. His decision-making is better each week. His character, his toughness, his leadership of the team, there’s so many good things about him.”

Zeno barreled his way into the end zone two plays later, cutting the UTSA lead to 31-24 with less than five minutes remaining in regulation. The UAB defense held firm on the ensuing Roadrunner possession and Zeno went back to work on a game-tying scoring drive.

“You can get all the reps in practice, you can get everything, but the game is where you can really grow and learn,” he said. “I’ve taken steps from Western Kentucky to last week to here. I don’t know what the future holds, but I’m going to keep taking steps.”

Zeno led UAB to a 38-31 lead in the first overtime session, but the Roadrunners responded with consecutive touchdowns and a failed 2-point conversion to take a 44-38 advantage with the Blazers awaiting their final chance.

McBride was stuffed on first down and Zeno threw incomplete on second down. On 3rd-and-10, Zeno was strip-sacked and Sidney Wells recovered the fumble at the 31-yard line. Zeno’s pass to Shropshire on fourth down fell incomplete to ensure UAB’s demise.

“They were in 3-deep coverage and not letting anything get over the top of them,” Zeno said. “I threw a back shoulder to give Shrop an opportunity. It didn’t work out but I’m proud of the way these guys played their butts off. That’s all you can ask for (in that situation).”