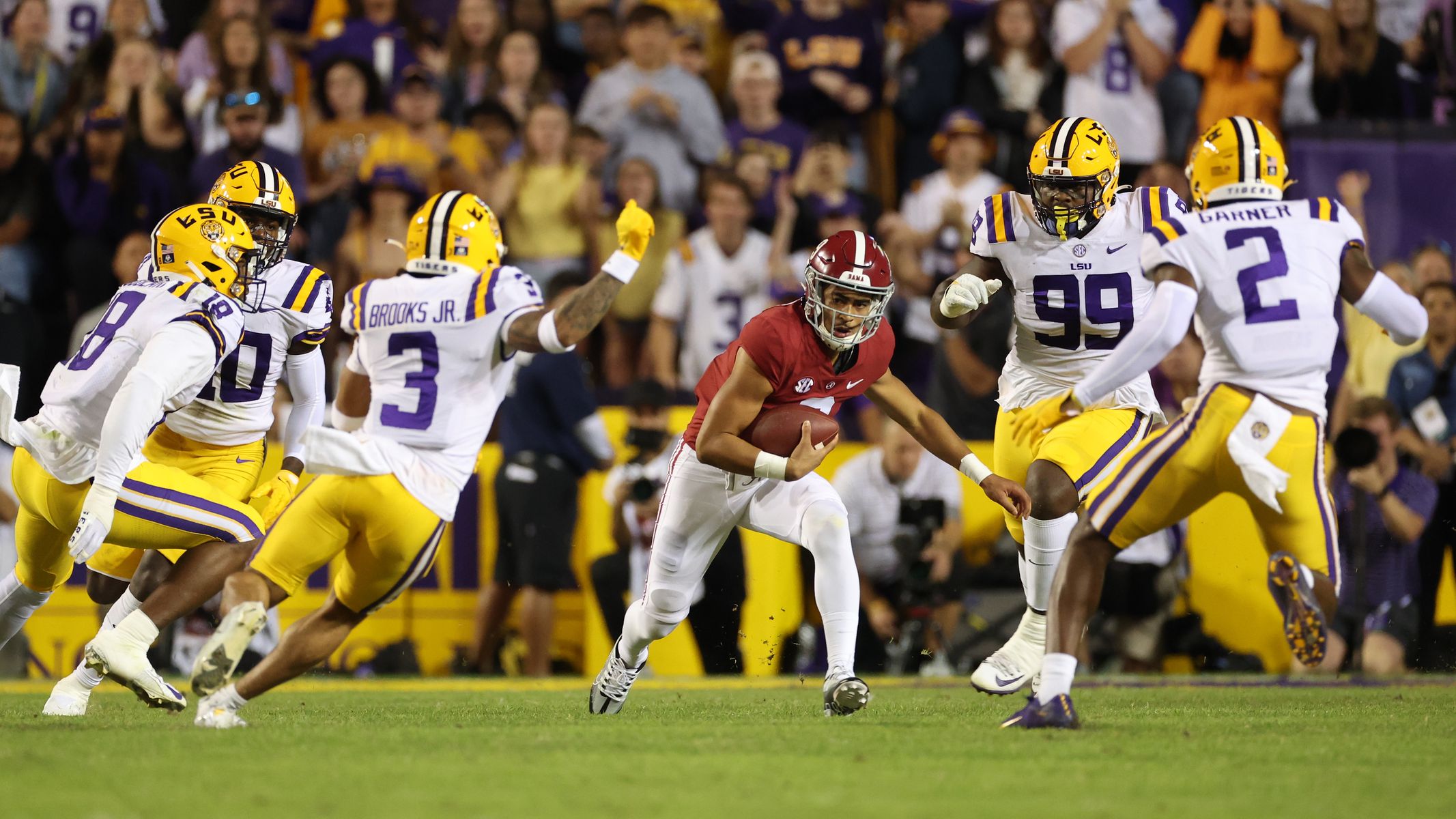 There’s no need to coat this in sugar.

Forget the playoff, the rest of this Alabama football season will be about salvaging pride and building for the future after a 32-31 overtime loss to LSU on Saturday night. All the familiar issues were back in the second loss in a three-game span that officially torpedoed a season that began with a preseason No. 1 ranking.

So let’s get right to the weekly Sunday rewind with notes and observations via the DVR replay of Alabama’s latest loss.

— It was interesting to see the graphic and discussion just after kickoff discussing the run threat of LSU QB Jayden Daniels. It’s long been an Alabama defensive issue, and we obviously know how this game ends now, so it was an early hint to what was to come. It’s also worth noting Daniels only ran it three times for seven yards before halftime but became a real factor from there.

— Another ominous warning sign: the roughing-the-passer flag on the third play of the game. It was the first of nine penalties for 92 yards in what’s been a theme of a frustrating season.

— But, there were certainly flashes of the old Alabama all night. There were blown coverages and busted tackles but the Tide recorded six sacks among the 11 tackles for loss. Anecdotally, it felt like LSU hit something for big yardage in the immediate aftermath of a sack or big defensive play.

— With an offense that struggled at times, Kool-Aid McKinstry’s punt returns were an early season boost. In fact, he still leads the nation with 17.7 yards per return. Opponents, however, have limited his opportunities. The LSU game was the third straight where he didn’t get a returnable punt and that followed the Texas A&M game when he had just one attempt for negative two yards.

— Another important number is six. That’s the total number of turnovers Alabama’s forced in nine games. That’s tied for the second-fewest in the nation. Dallas Turner’s fumble return touchdown at Tennessee is the outlier for a defense that used to change games with non-offensive scores.

— Bryce Young came out hot with three straight completions for 19, six and 21 yards, respectively. Jahmyr Gibbs was running strong on a drive that looked like the perfect energy boost coming out of a bye week. But after reaching the LSU 4, a Bryce Young scramble play that’s become his calling card went wrong for a change. An open-field Steph Curry-like move ended with a pass behind JoJo Earle. It looked like he pulled up in one of those plays that has frozen DBs in previous games but the ball wasn’t thrown in front of Earle and things went south from there.

— The next five Young passes fell incomplete as he sat 4-for-12 early in the second quarter as poor field position limited the options. It was just a field position back and forth for the next few possessions as LSU punted on each of the first four drives. LSU punter Jay Bramblett was consistent with an average of 41.8 yards and a long of 55 on six punts.

— It’s also worth noting Alabama punter James Burnip has seen dramatic improvement this fall. He averaged 47.7 yards with a long of 58 at LSU.

— I tried to spend more time watching the Alabama WRs running routes downfield at LSU and the lack of separation from DBs was the most consistent observation. Young tried to fit tight to non-existent windows a few times but he’s not getting much help.

— Other than Ja’Corey Brooks catching seven passes for 97 yards, his fellow wideouts combined for four receptions and 38 yards. Running backs had 11 catches while tight end Cameron Latu had three for 50 yards. This production is a stunning drop from last year when Jameson Williams and John Metchie were game changers.

— Young was sacked twice but LSU recorded 10 quarterback hurries. There were a few plays were it looked like RBs missed blocking assignments, always a key requirement for an Alabama ball carrier to master. Young was under duress on almost every throw in those three straight possessions starting at the 10- or 11-yard line.

— LSU did a nice job getting freshman TE Mason Taylor in mismatch situations. He had an early second-quarter catch on a play that looked a lot like the game-winning two-point conversion he’d catch in overtime. Two plays after Version 1.0 of that play, running back John Emory went uncovered out of the backfield for a 30-yard touchdown catch that included a great open-field move on Alabama safety DeMarcco Hellams.

— After the INT and three straight punts, Alabama scored on 7 of the next 8 possessions. That sounds more efficient than the reality since 4 of those 7 were field goals with only one shorter than 30 yards. But there’s also something to say about having a reliable kicker like Reichard who hasn’t missed in the past two games.

— Still, a 65-yard catch from Jase McClellan looked like it could’ve been a TD on the first of the four FG drives. The Tide breached the 10-yard line for a second time but had to settle for 3 when nobody was open again on third down. Young was sacked.

— Drives like that show how Alabama can outgain LSU 465-367 and still lose. Also, recall Alabama had two more offensive yards than Tennessee in that loss.

— Alabama caught a real break on the Latu fumble that was overturned by a rule that seemed to be news to everyone involved. I remember wondering what they could possibly be discussing in the video review for so long. That ended with another FG and a 7-6 halftime score.

— Coming out of the break, both Alabama and LSU went on long, time-consuming drives. The Tide covered 55 yards on 15 plays to get things started. It took 6:49 off the clock.

— The slog of a drive saw Roydell Williams establish his role as the short-yardage back. He twice converted fourth-and-1 plays and later scored a two-yard TD in overtime. The Hueytown product’s stat line wasn’t one for the scrapbook but his seven carries for 11 yards gained positive yardage each time.

— Alabama’s had one of the highest stuff rates in its running game but had just five stops at or behind the line Saturday.

— A third straight FG drive gave Alabama its first lead at 9-7 after that 15-play march. It was the first of a back-and-forth that continued until the final snap. A few times it felt like Alabama had the scoring drive it needed to get some air but the corresponding defensive stop never followed.

— After the 15-play drive for Alabama, LSU went 11 plays and 75 yards in a touchdown drive that soaked 4:41 off the clock. Touchdowns versus field goals. Repeat again.

— Kayshon Boutte is LSU’s star receiver who didn’t have a catch for nearly 20 minutes of action but finished as the Tigers’ top target. His seven catches led the team, three of which went for first downs. Among the biggest was a third-and-seven play on the 11-play TD drive. The catch came with former teammate Eli Ricks in coverage and set up the touchdown.

— Ricks appeared to play well through most of the night but was targeted late in his second Alabama start. He was flagged for a pass interference a few plays after the Boutte third-down conversion.

— Alabama appeared in trouble when the fourth 3-and-out of the night followed LSU’s touchdown with a 14-9 deficit. The Tigers punted it right back after gaining a single first down.

— While the WRs have struggled, it’s fair to say Young’s accuracy wasn’t quite as sharp on a number of throws. He completed less than half of his passes for only the second time as Alabama’s starter at 25-for-51 with 328 yards, a touchdown and an interception.

We’ll update this with the final quarter and OT as we watch.