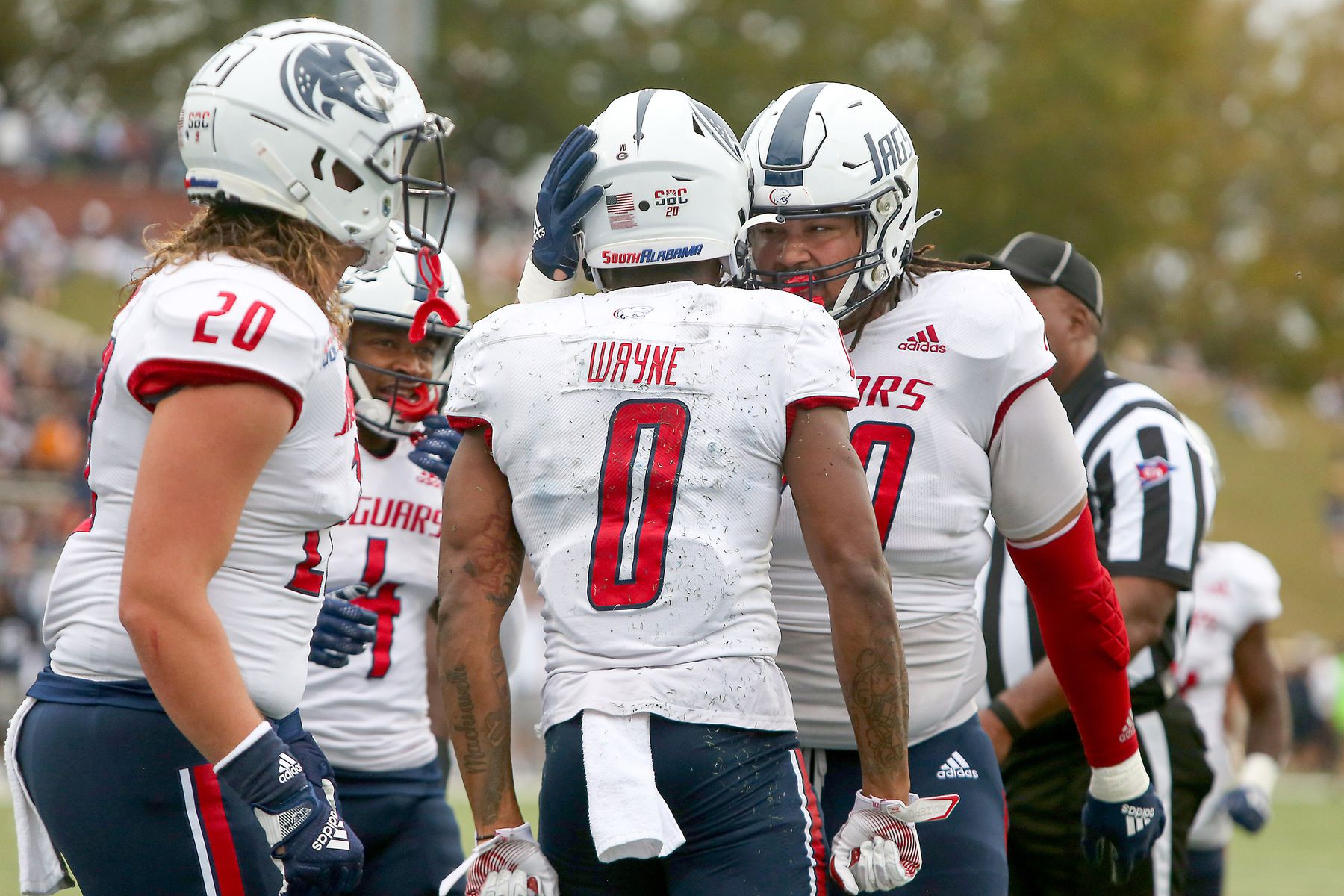 South Alabama rallied from two touchdowns down to beat Georgia Southern 38-31 on Saturday in Statesboro, Ga., setting a school record with its seventh win of the season.

La’Damian Webb rushed for a school-record 247 yards and four touchdowns on 35 carries as the Jaguars improved to 7-2 overall and 4-1 in the Sun Belt Conference. South Alabama clinched the first winning record in program history and won at Paulson Stadium for the first time in five trips.

South Alabama’s defense held Georgia Southern to just seven points in the second half. The Eagles’ second-half possessions ended in an interception, a touchdown, a punt, a punt, and a turnover on downs with 4:17 left.

South Alabama fell into an early 14-0 hole after the Georgia Southern offense and defense victimized the Jaguars in the first six minutes of the game.

On the second play from scrimmage, Carter Bradley’s pass was tipped at the line by linebacker Khadry Jackson, who then plucked it out of the air and ran 43 yards for a touchdown. The pick-6 gave the Eagles a 7-0 lead just 51 seconds into the game.

After South Alabama punted on its first possession, Georgia Southern’s offense drove quickly for a touchdown. Jalen White raced around left end and broke loose for a 54-yard touchdown, making it 14-0 at the 9:20 mark.

South Alabama answered with a touchdown — Bradley’s 10-yard strike to Jalen Wayne — but Georgia Southern scored again when quarterback Kyle Vantrease found a leaping Derwin Burgess in the end zone for a 16-yard touchdown. The Eagles led 21-7 after one quarter.

Jaguars rally in the second

South Alabama cut the lead to seven at 21-14 when Webb ran for a 1-yard touchdown on the first play of the second quarter.

After Georgia Southern added a field goal to go up 24-14, South Alabama’s Diego Guajardo hit a 27-yarder to make it 24-17. The Eagles scored on their first four possessions of the game, but South Alabama’s defense got stops on the final two series of the half.

The second one was a blocked field goal by Charles Coleman with six seconds remaining. That kept the Jaguars within 24-17 at halftime.

Penalties are a killer for South Alabama

The Jaguars have been among the most-penalized teams in the country this season, and lived up to that reputation in the first half Saturday. South Alabama was penalized nine times for 73 yards, including three times defensively on third down to keep Georgia Southern scoring drives alive.

South Alabama was penalized 13 times for 118 yards in the game. Guard Dontae Lucas was ejected after being called for unsportsmanlike conduct when officials said he spit on a Georgia Southern player after a touchdown.

Two of those penalties came for pass interference, the third for holding. The South Alabama offense’s biggest foul was a holding call that negated a 30-yard pass from Bradley to Omni Wells that would have resulted in a red zone opportunity.

South Alabama’s offensive line also had trouble with protection, allowing a season-high four sacks. The Jaguars got to Vantrease just once, only the third sack the Eagles have allowed all season.

Next up: South Alabama hosts Texas State at 4 p.m. Saturday. The game will be streamed live via ESPN+. Tangled Season 4 Release Date And All Other Updates! – Latest News