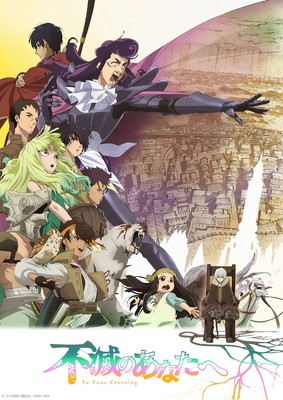 Crunchyroll announced on Friday that it will begin streaming the English dub for the To Your Eternity (Fumetsu no Anata e) television anime’s second series on Sunday.

The English cast, which features new and returning members, includes:

Kirstie Simone is directing the English dub at Studiopolis. She is also serving as the production manager. David Barr is the lead ADR engineer. Jamie Simone is the executive producer, and Rita Majkut is the producer. Jeff Nimoy is writing the English script. James Lafferty is the post production supervisor. Calvin Pfeffer is the re-recording mixer. Sean Kelley is editing the video.

The anime premiered on NHK Educational on October 23. Crunchyroll is streaming the second series worldwide except in Asia.

The anime’s first series premiered on NHK Educational in April 2021. The anime was originally slated to premiere in October 2020, but it was delayed to April 2021 due to the anime’s production schedule being heavily affected by COVID-19. Crunchyroll streamed the anime.