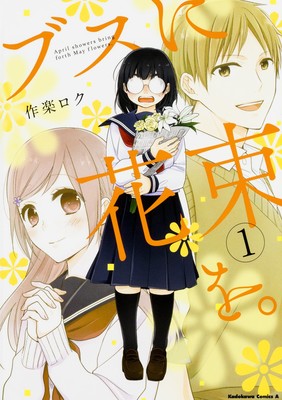 The official Twitter account for the Hiroshima Animate branch store posted a photo showing the 12th and final compiled book volume of Roku Sakura‘s Busu ni Hanataba o (April showers bring forth May flowers, or literally Flowers for Ugly) manga on Thursday. The volume’s wraparound jacket band reports that the manga is inspiring an anime. The announcement does not specify the anime’s format.

The manga centers on Hana Tabata, a girl who constantly deprecates herself, considers herself ugly, and keeps only to herself. She spends her time taking care of the flowers that decorate her classroom — but is careful to do it only in the morning when nobody is around, as she is afraid of being laughed at for being an “uggo who takes care of pretty flowers.” But one day, the class’ most popular guy Ueno sees her taking care of the flowers.

Sakura launched the manga in Kadokawa‘s Young Ace magazine in April 2016, and ended it on September 2 earlier this year.