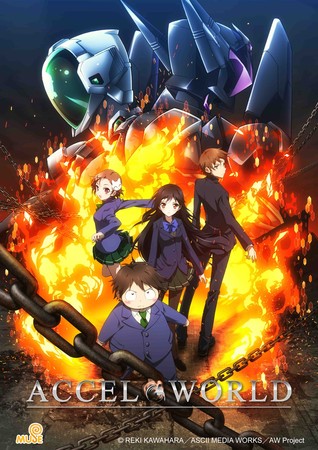 Set in the year 2046, Neuro-Synchronization allows humans to virtually manipulate their five senses, where people can access the internet and enter virtual worlds via Neuro-Linkers. The series follows Haruyuki “Haru” Arita, a short, fat boy who has low self-esteem due to being bullied at school which Haru vents his frustrations in virtual world games. Haruyuki soon gets the attention of Kuroyukihime, the Student Council Vice-President who invites him into the “Accelerated World” called Brain Burst, a program that allows users to make time appear to stand still in their surroundings by “accelerating” their brainwaves in the real world. But in order to gain more points to accelerate, Brain Burst users fight each other in a virtual reality massive multiplayer online (VRMMO) fighting game where losing all of your points means you can never use Brain Burst again. Grateful for helping him, Haruyuki vows to help Kuroyukihime defeat the “Six Kings of Color”, the leaders of the most powerful factions in Brain Burst and obtain Level 10 to ultimately learn why the “Accelerated World” was created.

The anime premiered in April 2012.