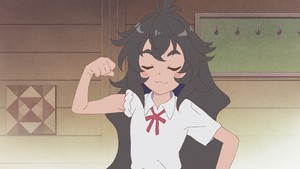 It’s a new week, and you know what that means: a new DIY goblin for us to meet. This time, it’s Shii and her catlike reflexes dropping in on our gang and sweeping them up with her strength, valor, and feline vocal tics. At over a month into the season, this is the point where it’s easy to take Do It Yourself!!‘s consistently charming presentation for granted, which is why, right off the bat, I’m commending the anime for still looking as lively as it does.

In fact, that kineticism really helps sell Shii’s hyperactive demeanor. She’s a firecracker thrown into the club’s low simmer, and she explodes before they can hope to douse her. It’s especially fun to watch Rei get chided into her shenanigans alongside the usual knuckleheads. She might be the most serious about DIY culture, but that doesn’t mean she’s gonna back down from an arm wrestling match. This is the kind of content I want to see when I turn on an anime about girls in an esoteric club on the verge of obsolescence: physical challenges.

Of course, it’s not all fun and games, and DIY is smart enough to temper Shii’s eccentricities with context. Growing up as the youngest sister of two respected, “proper” siblings in an at least semi-traditional southeast Asian household definitely throws her tomboyish nature into a new light. Though it’s largely played for light chuckles in the cold open, her resistance to formality and femininity, as they’re understood in the orthodox sense, probably made her the black sheep of the family when she was growing up. She appears to act more at home while staying at Haruko’s, where she’s allowed to roll up her sleeves and go noodling for some koi. It’s not difficult to understand why she would have wanted to matriculate to YuuVoc.

At the same time, being estranged from your family in a foreign country is hard on a person even under the most ideal circumstances. And I appreciate this very light gradation of melancholy in Shii’s personality. It’s subtle enough to not derail the show, but its presence helps her carry the episode. For instance, the implication is that her aggressive flirtations towards Purin are Shii’s way of trying to make a friend in a strange place. How could she have known that she picked the single most tsundere girl in the country? Or maybe she likes the challenge! Either way, she has much more immediate success with the DIY club. Even as an unofficial member, she’s got plenty of moxie for everyone.

And they’re gonna need it, because this week continues the arc of their biggest project yet: the tree house. Rei uses this opportunity to take a firm stance on what DIY is and isn’t, and that’s a good thing, both thematically and dramatically. Dramatically, because now that we have at least two filthy rich kids in the club, we need a reason why they can’t be importing the finest exotic hardwood for every one of their projects. But the thematic side is more important, because DIY ethos is supposed to be democratizing in nature. It’s about effort, not moolah.

That effort once again goes into the technical portion of the episode, with animation so precise you might mistake it for a YouTube tutorial (a good one). I still get heart palpitations every time I see Serufu holding anything battery-powered, so thankfully the work this week gets split pretty evenly among the girls. Double thankfully, they’re not letting Serufu operate a power saw yet. And true to the heart of DIY, we get to witness the satisfaction inherent in turning something unremarkable into something both functional and aesthetically pleasing. Alchemy-like, the gang transmutes a used pallet into a nice rustic shelf. DIY isn’t necessarily art, mind you, but it’s not necessarily not art either. Recall how pleased Takumi was to make that vase hanger, and how delighted Shii was to see it. You put a little bit of yourself into each DIY project. That’s the quintessence that can’t be replaced.

While I already praised Do It Yourself!! for its consistency, I can’t wrap up without acknowledging this episode’s break from tradition. First off, Serufu doesn’t injure herself into a nurse visit. They do go to Haruko’s room anyway, so I’m willing to forgive that, but the show’s on thin ice. More significantly, however, Serufu and her mom don’t torture Meat this week! They eat a perfectly pork-free meal of beef and poultry while the pig sleeps soundly at their feet. This is a good thing—I’m pro-Meat—although, as if to make up for it, the Yuas enjoy an especially deranged conversation about the delights of carnivorism. I can’t say Meat’s off the menu yet, but I’m glad he’s sticking around longer than expected. Praying for that pig.

Do It Yourself!! is currently streaming on
Crunchyroll.