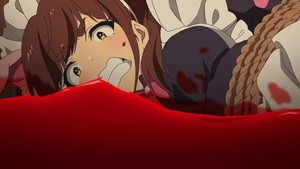 This feels like a momentous episode of Akiba Maid War even by its usual shock-and-awe standards. Here we celebrate Ranko’s thirty-sixth birthday. We watch Nagomi begin to actually consider the Oinky-Doink crew as friends and comrades. We get to see Chief in a maid outfit! Truly there’s something for everyone here, whether your preference is upbeat song-and-dance numbers, or unrelenting lead-pipe beatdowns. Balance has always been the key to Akiba Maid War‘s bizarre fusion, so why not an episode specifically highlighting the parallel powers of both friendship and incredible violence?

The backing material of all that is, of course, Ranko’s aforementioned birthday. I had obliquely referenced Chuck E. Cheese back when I first started down this bloody path, so I guess I shouldn’t be surprised to find out that birthdays are serious business in the maid underworld. It allows for more of those driving aesthetic mash-ups of maid and mafia antics, as Ranko’s birthday conflicting with another, more popular maid at an affiliated cafe winds up driving the escalations of this one. But honing in on a personal element like that at last also allows Nagomi to shine, pushing things forward on account of her trying to do something genuinely nice for the co-worker who’s been most consistently helpful and respectful since they both started at Oinky-Doink. It’s just cool to see Ranko and Nagomi operating together again after their chaotic debut outing in that first episode, this time with Nagomi amusingly taking point just trying to negotiate flier hand-outs and mutually-respective celebrations.

In fact, what I’m mostly infuriated by (in a good way) is Akiba Maid War‘s long-term utilization of that birthday bit in this episode. I’ve thrilled to the show’s effectively-foreshadowed subversions all the way through, and now the thing it actually manages to fully blindside me with for once is the age-old surprise birthday party plot-line?! It’s a stock sitcom setup played completely straight, the other Oinky-Doink girls wholly selling me on the idea that they’d be dismissive enough of Ranko’s celebratory potential to pass on partying for her. So even after last week proved that the likes of Shiipon were invested in this place and its people on a personal level, I still bought it hook, line, and sinker until the revelatory “Awww” moment of what they were actually scheming. It’s heartening, of course, and fuels the rest of the episode well as we understand that Ranko and Nagomi are in fact right to want to place some homely value in the cafe and their co-workers. God they got me!

That might just be an effect of such a surprise being the antithesis of Akiba Maid War‘s approach that I’m fully familiar with yet still totally here for this week. Like the fact that Head-Sheep-In-Charge Kaoruko turns out to be twistedly possessive over her birth date? Yeah, I could see something like that coming, meaning I wasn’t going to question too much why she had a whole ridiculous tomato-juice based death trap taking up space in the back of that cafe. Why does she throw the sheep down there with them? Don’t worry about it, the main reason is so it can be in odd positions in the background for humor value even as Nagomi and Ranko are threatened with the most disgustingly-flavored drowning imaginable.

Prioritizing for those kinds of setups doesn’t preclude Akiba Maid War getting sincere with itself this week. Just as we saw last week how an established employee like Shiipon could regard Oinky-Doink as ‘home’, we see in this one that the likes of Ranko and Nagomi might actually be more similar than one would think. Sure, their approaches are different, as Nagomi goes to bat for her friend via promoting and sticking up for her birthday celebration, while Ranko is more likely to just pop a cap in someone in retaliation. But it all fits with the tone we’ve followed this series on before, as we look back and realize that all the lead Ranko poured into antagonistic maids previously started off not because she herself was immediately at risk, but because they started threatening her piggy pals. It provides a window into Ranko’s past that demonstrates that she was once as uncertain about violence as Nagomi is, indicating that whatever landed Ranko in prison until recently was probably at the behest of her previous comrades, and hinting at a similar motivational path forward for Nagomi.

Among all the things like tomato torture and leading the sheep maids like lambs to the slaughter by the end which make this come off as one of the most outrageous Akiba Maid War entries yet (which is saying something given that the previous episode involved a rocket launcher), it’s that kind of character work that pushes this one above and beyond. This is a series that could very easily skate by on its central joke, but its potential for true greatness always lay in the idea of just doing a solid crime drama while still dressed in all that ridiculous otaku-targeting finery. Last week’s episode meditating on the idea of world-building and backstories wrote that check, and this one cashes it, making characters like Nagomi feel, even in this absurd setting, like actual people with an arc ahead of them.

And as Ranko demonstrated her empathy towards Shiipon then, now we completely confirm that she isn’t here entirely to pursue revenge, she really does enjoy the maid work and appreciate the people she gets to do it with. It’s sweet to hear Ranko say how she was looking forward to the birthday event Nagomi was planning for her, devoted enough to her new work-friend that she’ll even try to drink all the tomato juice away before they drown in it. Between stuff like this and her oblivious delivery of the body-disposal note back in the fight club episode, I am really enjoying this show’s demonstration that Ranko is…not the sharpest person around. Truly, she can be as moe as any of the other maids. Not that you need all my convincing, I think any of us would have been happy to attend Ranko’s birthday party. It’s just rewarding that there’s so much going on in it here, even going so far as to confirm via that surprise celebration that the other crew members are a good gang of girls (and panda). The Oinky-Doink Cafe has really started to come across like a place wherein the people within it are family, sort of like Olive Garden, but with slightly less criminal activity.