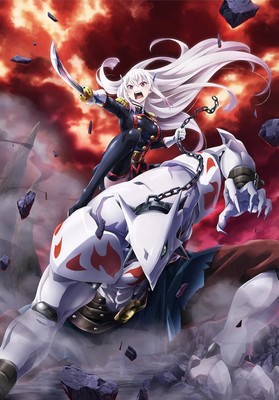 The official Twitter account for the television anime of writer Takahiro and artist Yōhei Takemura‘s Chained Soldier (Mato Seihei no Slave or literally, Slave of the Magic Capital’s Elite Troops) manga revealed on Saturday that Kohta Yamamoto (Attack on Titan The Final Season) will compose the music, and Chikako Yokota (The Seven Deadly Sins: Imperial Wrath of The Gods) will direct the sound.

Yūya Hirose and Akari Kitō are starring in the anime as Yūki Wakura and Kyōka Uzen, respectively.

Other cast members include:

The battle fantasy is set in a world where a demonic gate has unleashed monsters known as Shūki. A special peach tree is able to give special powers, but only to women. The story begins when a down-on-his-luck boy named Yūki Wakura meets Uzen Kyōka, a girl who has gained the power of the peach, and is the captain of the 7th Anti-Demon Squad.