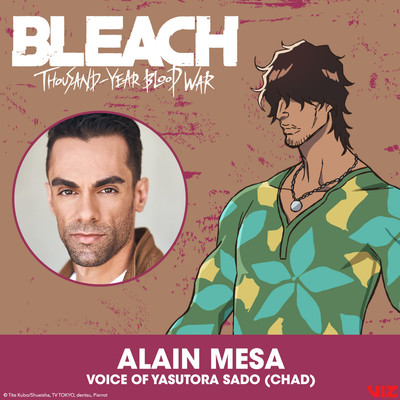 Viz Media announecd on Thursday that it has recast the role of Chad (Yasutora Sado) in the English dub of the Bleach: Thousand-Year Blood War anime, casting Alain Mesa in the role in place of the character’s previous voice actor Jamieson Price.

Price added in a post from his Twitter account that he no longer auditions for roles of characters that are people of color, and that it was a “difficult decision to say no” to his casting for the role, but welcomes Mesa’s casting. Mesa commented on his own Twitter account that “[Price] was a rockstar and brought so much life to the role.” In the story of the anime and manga, Chad is a character of Mexican and Japanese descent. Mesa hails from Cuba.

The other returning cast members for the dub include:

The dub will premiere on Friday on Hulu. 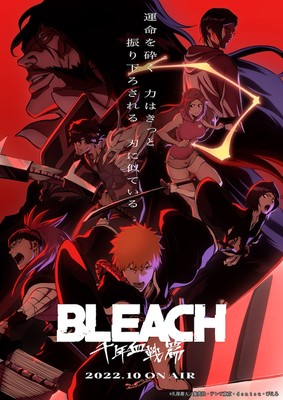 Bleach: Thousand-Year Blood War is the television anime based on the “Thousand Year Blood War” arc of Tite Kubo‘s Bleach manga. The show premiered on October 10 in Japan on TV Tokyo and its affiliates, and is streaming on 20+ services in Japan, including Hulu and Disney+. Viz Media began streaming the anime on Hulu in the U.S. on October 10. Viz Media held the anime’s North American premiere at New York Comic Con on October 8. The anime is streaming on Disney+ internationally, and Ani-One Asia is streaming the series in many Asian countries. The anime will run for four cours (quarter of a year) with breaks in between.

Tomohisa Taguchi (Twin Star Exorcists, Kino’s Journey – The Beautiful World, Akudama Drive) is replacing Noriyuki Abe to direct the anime at Studio Pierrot. Masashi Kudo is returning as the character designer, and Shiro SAGISU is returning to composing the music.

The show’s Japanese returning cast also includes cast members who have not appeared in the anime, but are reprising their roles from the Bleach: Brave Souls game. Behind the Vocals of Kaguya-sama’s Iconic OPs: Interview with Masayuki Suzuki Anime