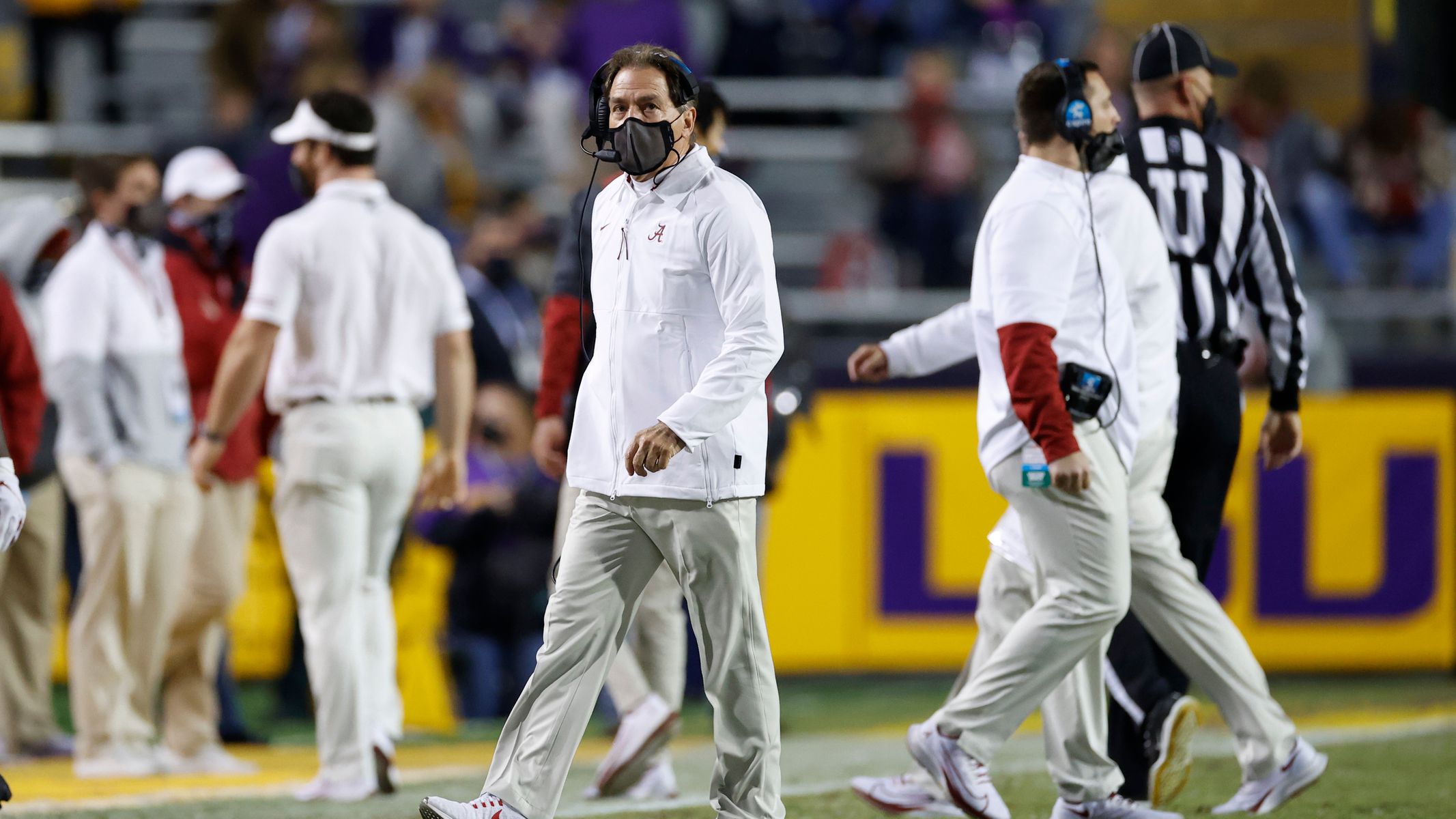 Alabama has beaten one squad currently ranked in the College Football Playoff rankings. Saturday can bring its second top-25 victory.

The No. 6 Crimson Tide (7-1, 3-1 Southeastern Conference) will head into Louisiana State’s Tiger Stadium for a night game against Brian Kelly’s 10th-ranked squad. Both teams were idle last weekend, nursing injuries and reevaluating their season to this point.

Alabama last played on Oct. 22, smashing Mississippi State, rebounding after its Tennessee loss. The Tigers (6-2, 4-1) have won a pair since dropping a home contest to the Volunteers on Oct. 8. In his last two games, quarterback Jayden Daniels has helped lead LSU to a pair of 45-point efforts, topping Florida and Ole Miss.

It’s no Game of the Century, but it should still be an electric atmosphere in Death Valley. Here’s what Nick Saban and co. said about handling the noise and the Tigers, along with a look at what LSU said about hosting the Tide.

“We really need to come together as a team versus a good opponent. And that’s obviously going to be really important for this game versus LSU, who right now is probably playing as well as anybody in the country. They’re very well-coached. This game has always got significant implications – they’re always ranked, we’re always ranked. It’s kind of a rivalry game that’s always a really important match-up. Brian Kelly has done an outstanding job there bringing his team along, improving each week.”

Did he give any advice to Brian Kelly on accepting the LSU job? “Not to divulge anything that I talked to anybody else about, but LSU is … people have great passion there. It’s a really good football job in every way. You’ve got a lot of good players in the state. You’ve got great support and great passion. And he’s done a really good job of creating sort of the intangibles that you need to have to have a really good team. I’ve always thought LSU’s a special place because of the passion and the people and the commitment they have to a standard of excellence.”

On 2011′s Game of the Century: “Man, I remember a lot about it. It was a great game. There was a lot of great players on the field. Both teams competed extremely well in the game. We came up short in the game but it was a physical, tough game. And I think the one thing that kind of shows you from 2011 to now how much the game has really changed in a lot of ways. I’m not saying it didn’t change for the better, but that was old-fashioned football probably at its finest with two really good teams.”

On last year’s 20-14 home win over LSU: “So, you know, we take some of that but we also understand that it’s a completely different group. Different coaching staff, a lot of different players, so we still watch the game but we try to take it for what it is. Again, it’s a different unit. A lot of changes in the roster, a lot of changes in the coaches so we take what we feel like is applicable to this year but also we know that there’s a lot of movement.”

On comparing LSU’s Jayden Daniels to Arkansas quarterback KJ Jefferson: “They’re two totally different guys who can do the same things. Jayden is a really elusive guy, so fast, he’s like a running back. So quick and nasty out of his cuts. I’m excited about him. I think he’s definitely one of those quarterbacks you have to prepare for. You have to tackle well, you have to practice well to go against a guy like that. But we have a great staff that prepares and we’ll be ready this week.”

On Tiger Stadium: “I’ve never played there, never played there when I was at Tennessee. But I’ve seen videos of there when Ed Orgeron was there and their walkout and that stadium how crazy it is. Every SEC school is going to be cray, but definitely going to that stadium at LSU I’m super excited about it. I know it’s going to be jumping. We’ve played in some hostile environments in a couple of away games. It’s about how we prepare and go in there and how we handle the situation. Definitely going to be huge for us. I’m excited to be able to go into somebody else’s house and play in their backyard again.”

What the Tigers said about the Tide

Head coach Brian Kelly on the environment Saturday night: “That’s why you come to LSU. It’s not pressure. It’s a privilege to play in games like this. That’s certainly why I came to LSU. … All of the noise and all of the other things are just distractions. This is about preparation. This is about focusing on our process this week and preparing to play our very best.”

On stopping Bryce Young: “There’s no real good answer. If I had one, I certainly would be voicing it. In many instances, you can’t defend him because he’s so elusive and he wants to throw the football. He could take off so many times, but he’s trying to find receivers down the field and just has a great awareness, a sense. He’s a true quarterback. He’s not a scramble-around guy that is just throwing it up there. He’s very intentional about everything that he does. He’s not taking sacks. He’s the Heisman Trophy winner, and he should be. He’s the best player in college football.”

Junior wide receiver Kayshon Boutte on Alabama’s secondary: “I feel like secondary, it’s just like every other secondary, you know? It’s not like, ‘Oh, you gotta watch for this dude, this dude.’ If you ask me, everybody the same. We just gotta do what we do.”

Senior punter Jay Bramblett joked about his hometown connections this weekend: “Too many people (blowing his phone up). We weren’t going to go all the way down that list (of friends asking for tickets). It’d probably be a bit too many.”

Bramblett is a Hillcrest-Tuscaloosa alum and will play his hometown team for the second time in his career (Notre Dame in the 2020 CFP). Peter Rauterkus and Mackay Suire of The Reveille broke down Bramblett’s journey.