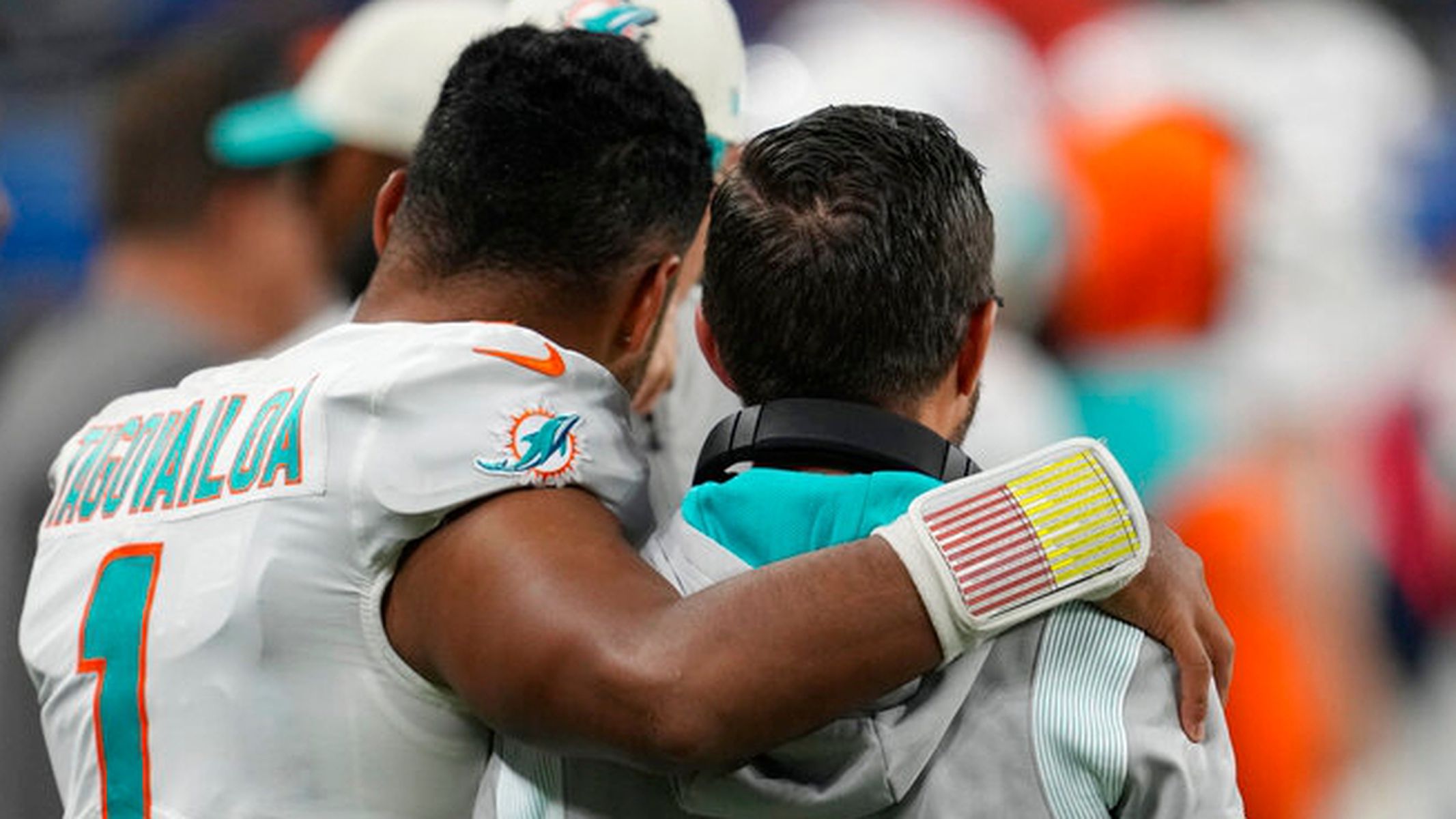 One year ago at the trade deadline, Miami general manager Chris Grier tried to obtain quarterback Deshaun Watson from the Houston Texans even though the Dolphins had spent the fifth pick in the 2020 NFL Draft on Alabama QB Tua Tagovailoa.

Grier said the pursuit of another quarterback wasn’t a reflection on the team’s confidence in Tagovailoa.

· WHY DID THE JAGUARS TRADE FOR SUSPENDED CALVIN RIDLEY?

When Miami owner Stephen Ross announced the firing of coach Brian Flores in January, he exhibited a similar sort of until-something-better-comes-along confidence in the Dolphins’ starting quarterback.

Then during the summer, the NFL announced the Dolphins would forfeit a 2023 first-round draft choice and 2024 third-round draft choice, Ross had been fined $1.5 million and suspended through Oct. 17 and Vice Chairman Bruce Beal had been fined $500,000 for violations of league policies. A league investigation found Miami had violated anti-tampering rules. The player the Dolphins were after? Seven-time Super Bowl-winning quarterback Tom Brady.

So talk is cheap, but at this year’s trade deadline, Grier gave a tangible sign that the Dolphins are finally all-in on Tagovailoa. Grier traded the final 2023 first-round pick from Miami’s draft stockpile to the Denver Broncos for defensive end Bradley Chubb. The Dolphins won’t be hunting for Tagovailoa’s replacement in the draft but will be hunting for an NFL title with the former Crimson Tide All-American under center.

At the NFL Scouting Combine on March 2, Grier was asked: Do you think Tua Tagovailoa can be an elite quarterback?

“I can’t say he can’t be,” Grier said. “It’s in a situation now where this will be built around his skill set and what the offense can be and Mike’s vision of how he fits, so I wouldn’t say he can’t be. It’s too early. He’s played 20 games maybe.”

Six games deeper into Tagovailoa’s career, Grier was asked the same question on Wednesday. This time, the general manager said: “I will say we are very, very happy with how Tua is playing and what he’s done for us. It’s been really exciting to watch him blossom on and off the field. He does so much work here behind the scenes that people don’t see in terms of all the stuff to prepare to make himself take that leap. Him and (coach) Mike (McDaniel), their connection is really special. I think you guys kind of feel it being around them, and it’s been really fun watching them. That’s why we drafted him where we did. We believed, and so we’re very, very happy with him.”

It doesn’t appear that Tagovailoa felt that belief – and perhaps had no reason to – until the team hired McDaniel, the San Francisco 49ers offensive coordinator, to take over the team.

“I would say I felt supported from the time Mike came in,” Tagovailoa said on Wednesday.

Having the organization lined up behind the starting quarterback allows the general manager to make deals to acquire the caliber of players that cost a first-round draft pick, McDaniel said.

“In those conversations — and I’ve been on both sides of them — but you’re firmly on one side of the fence or the other,” McDaniel said. “And it does change how you’re able to big-picture operate. I think it influences it. It doesn’t, like, dictate it, but you still — teams win, individuals don’t. But when you’re in the search, it’s a difficult place to be in and there is some clarity with regard to being very, very confident in your starting quarterback.”

The Dolphins are 5-3 in 2022, but two of the losses came when Tagovailoa was sidelined by a concussion and the other came in the game in which he was injured.

While the organization staggered into line to back Tagovailoa, the quarterback is a believer in the 2022 Dolphins.

“I think throughout OTAs and throughout training camp, we could see the potential that we had as a team offensively and defensively, and we’re not afraid to talk about Super Bowls here,” Tagovailoa said. “We’re not afraid to talk about going to a playoff game, having an opportunity to go to one and then, hopefully, winning one. But, yeah, if you were to ask me that, I would say I have full belief that we are capable.”

Entering Week 9 of the NFL season and Sunday’s game against the Chicago Bears, Tagovailoa leads the league with a passing-efficiency rating of 112.7. He has completed 130-of-186 passes for 1,678 yards with 12 touchdowns and three interceptions.

The Alabama Game of the Week is the Philadelphia Eagles-Houston Texans contest on Thursday night. Fifteen players from Alabama high schools and colleges are on the teams’ active rosters.

The complete Week 9 schedule (with all times Central and with point spreads from vegasinsider.com):