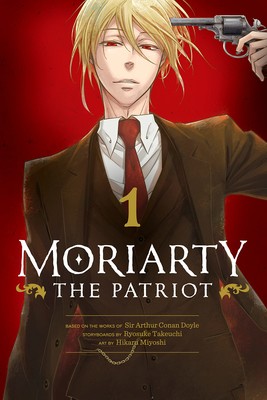 This year’s December issue of Shueisha‘s Jump SQ. magazine revealed on Friday that Ryōsuke Takeuchi and Hikaru Miyoshi‘s Moriarty the Patriot (Yūkoku no Moriarty) manga will end its first part with the “Valley of Fellows” arc, named after Sir Arthur Conan Doyle‘s fourth and final Sherlock Holmes novel The Valley of Fear, in the magazine’s next issue on December 2.

Takeuchi and Miyoshi debuted the manga in Shueisha‘s Jump SQ. magazine in August 2016. Takeuchi draws the storyboards and Miyoshi provides the art. Shueisha published the manga’s 18th compiled book volume on August 4. Viz Media is releasing the manga in English.

The story’s protagonist is James Moriarty, the famous antagonist from Sir Arthur Conan Doyle‘s Sherlock Holmes series. In the manga, he is an orphan who assumes the name William James Moriarty when he and his younger brother are adopted into the Moriarty family. As a young man, he seeks to remove the ills caused by England’s strict class system.

The manga inspired a television anime that premiered in October 2020, and it had 24 episodes. Funimation streamed the anime as it aired in Japan, and it is streaming an English dub. The anime’s second half premiered in April 2021. The second half began with the 12th episode.