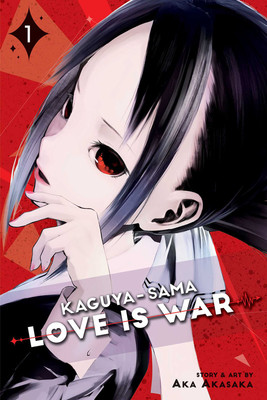 Kaguya-sama: Love is War manga creator Aka Akasaka announced on Thursday that he intends to stop working as a manga artist and will now focus solely on writing. (Akasaka uses the word “gensaku,” which literally means “original work,” but in the context of manga production, denotes the specific task of writing a manga’s story, as opposed to drawing the art.) He intends Kaguya-sama: Love is War to be the last manga for which he was responsible for the drawing.

He added that he still plans to draw as a relaxing hobby.

He also noted that while Kaguya-sama: Love is War recently ended on Wednesday, the manga ended with some foreshadowing, and that he is working to “make good” on that foreshadowing “in the best way possible.”

Akasaka has, focused more on writing for manga that other people draw in recent years, such as Oshi no Ko, which Mengo Yokoyari draws. He also previously drew the Sayonara Piano Sonata manga, which Hikaru Sugii wrote. Earlier this year, Shueisha‘s Young Jump magazine held auditions for a new manga artist, with an opportunity to work with Akasaka on a new manga.

Akasaka began the Kaguya-sama: Love is War manga in Shueisha‘s Miracle Jump magazine in May 2015 but it moved to Young Jump in March 2016. The manga ended on Wednesday. Shueisha published the manga’s 27th compiled book volume on October 19, and will publish the 28th volume on December 19.

Akasaka and Yokoyari (Scum’s Wish) launched the Oshi no Ko manga in Young Jump in April 2020. Shueisha‘s MANGA Plus service is releasing the manga in English. Shueisha‘s published the manga’s ninth compiled book volume on October 19. Yen Press licensed the manga. The manga is also inspiring an upcoming anime.