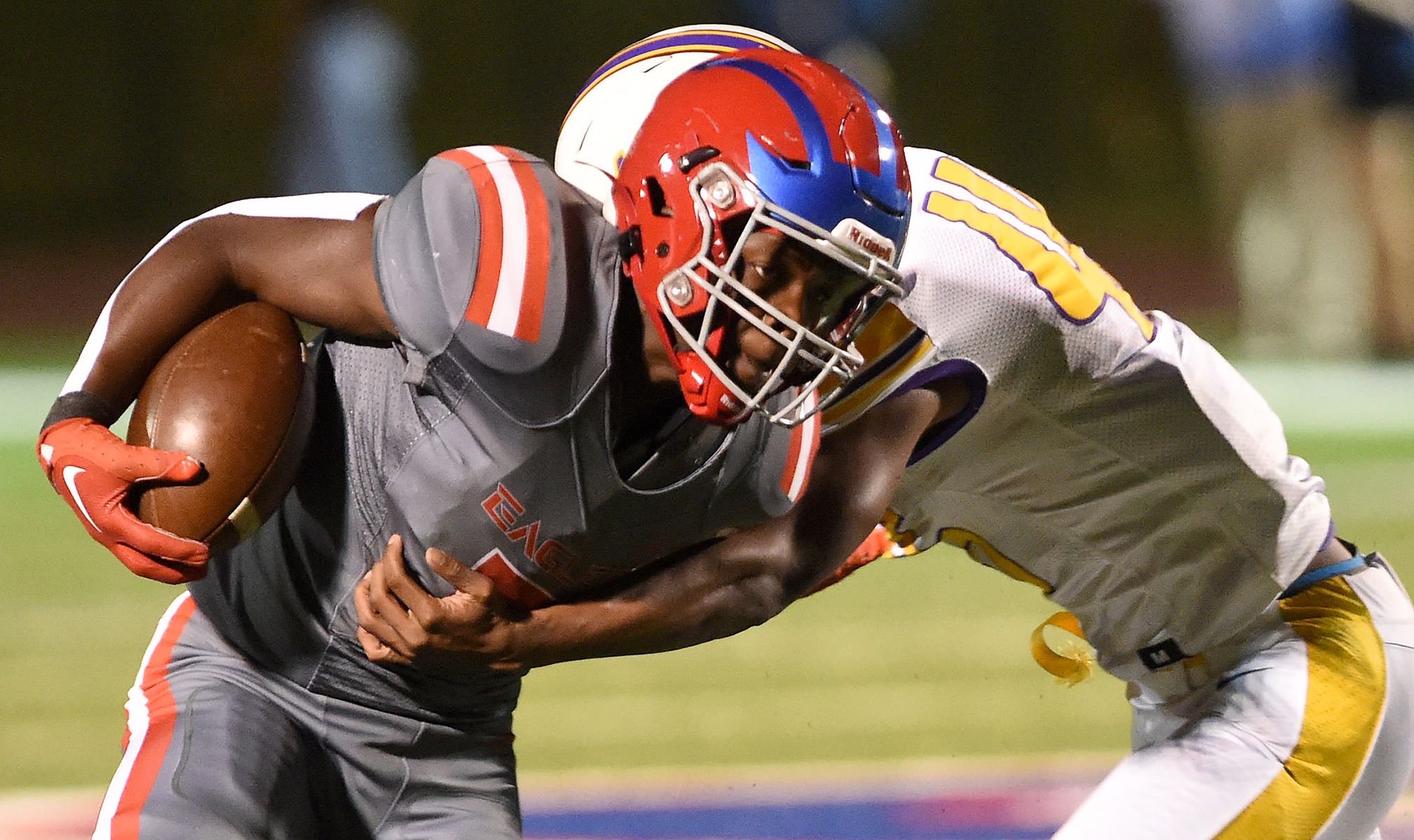 Jackson-Olin will be looking to upset eighth-ranked Center Point on Friday in the opening round of the Class 6A state football playoffs. The 4-6 Mustangs earned the third seed from Region 5 with a 3-3 record while Center Point lost just once in nine games, finishing second to Clay-Chalkville in Region 6.

The Eagles, back in Class 6A after spending the past four years in 5A, will host J-O at 7 p.m. at Bowman Field.

“We are the smallest 6A (school) in the state, we knew that coming in,” Center Point head coach George Bates said. “We wanted to prove some things to ourselves. I wasn’t about proving anything to anyone else. We don’t feel underrated at all. If people want to underrate us that’s cool. That’s cool with us. We’re going to keep going to work and trying to win ballgames.

“Playing our ball, running the ball, making timely throws in the passing game, playing high-quality defense and being strong in the kicking game – that’s just our formula for success. We don’t have to do anything out of the norm. Everybody has to be accountable and handle their assignment.”

Jamaal Bess is in his first season at the Mustangs’ head coach, replacing Tim Vakakes who led Jackson-Olin to a 9-3 record in 2021 and to three playoff berths in nine seasons.

“The key to us this year was trying to create a culture around here where we stay positive at all times,” Bess said. “Pure positivity and proper preparation, whether that’s academically or in the weight room, on and off the field.

“We had a very tough schedule, so it took a lot of positivity through hard times,” Bess said. “I think these guys did a great job overcoming the storm, keeping their nose down, and having a good time.”

Bess picked up a win in his debut, 14-10 over Pelham, before a 39-6 loss at No. 5 Hartselle. After a win over Parker, the Mustangs lost four straight before two straight regions wins to secure the playoff berth.

“I get excited seeing the guys overcoming challenges ahead of them. We started off the season with academic challenges. We overcame those. We overcame some injuries. It’s been a lot of uphill battles, and they overcame every last one of them and stayed positive doing it,” Bates said.

The Mustangs played seven road games this season, including four straight to open the year.

Bates is 39-19 in his fifth season at Center Point and 78-49 in 11 years overall with stops at Parker, Minor and Woodlawn. He’s wary of Jackson-Olin, regardless of the Mustangs’ record.

“They’re extremely athletic,” he said. “They are a lot of guys who can run and make plays on their feet and they play hard. That’s what caught my eye about them.”

Bess said he expects attention to detail will determine the outcome on Friday.

“We’ve got a lot of athletic guys,” Bess said, “and we’re going to be ready. To me, it’s going to come down to a game of who does the small things right. Protect the football, special teams, and making plays.”

Bess praised his seniors for growing in their leadership roles this season.

“Everything’s never going to be perfect, don’t get that wrong,” he said. “But for the seniors to bring everyone back together, hold the group tight and bring the young guys with them. It’s nice to see those guys turn into great leaders. Our leaders, for the most part, have done a phenomenal job this year.

“We talk a lot about their ‘afterlife.’ So, all my seniors have a plan of what they want to do. It’s just trying to get their plans activated for that day they walk across the (graduation) stage. They have a plan of where they’re going next. That’s the most exciting part for me to see these guys develop on and off the field.”

Bates, who has led Center Point to the playoffs in all five of his seasons at the school, said he continues to try to build on the Eagles’ base of support. “Come out and support, you don’t have to be in the Center Point community at all,” he said. “Come out and watch some high-quality football on Friday. Whether you’re an Eagles fans or want to watch some good football, we need all the fans we can get, as we are trying to build a fan base here.” RHONJ:Jennifer Aydin is the ‘queen of candy’ in pink leg warmers and blue leotard Latest News