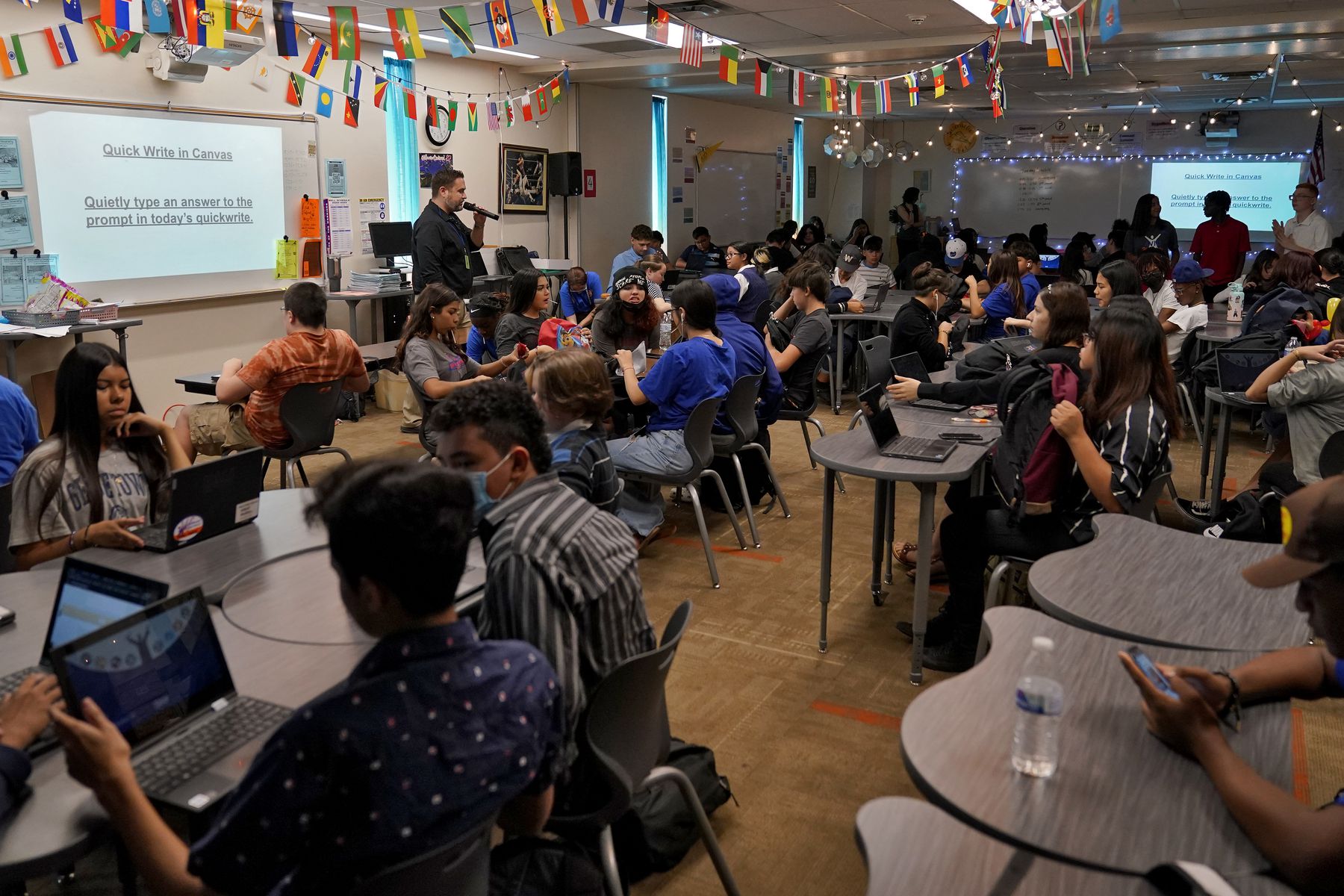 This is an installment of the AL.com Education Lab’s “Tackling Teacher Shortages” series, produced in collaboration with newsrooms around the country.

MESA, Ariz. — A teacher in training darted among students, tallying how many needed his help with a history unit on Islam. A veteran math teacher hovered near a cluster of desks, coaching some 50 freshmen on a geometry assignment. A science teacher checked students’ homework, while an English teacher spoke loudly into a microphone at the front of the classroom, giving instruction, to keep students on track.

One hundred thirty-five students, four teachers, one giant classroom: This is what ninth grade looks like at Westwood High School, in Mesa, Arizona’s largest school system. There, an innovative teaching model has taken hold, and is spreading to other schools in the district and beyond.

Five years ago, faced with high teacher turnover and declining student enrollment, Westwood’s leaders decided to try something different. Working with professors at Arizona State University’s teachers college, they piloted a classroom model known as team teaching. It allows teachers to voluntarily dissolve the walls that separate their classes across physical or grade divides.

The teachers share large groups of students — sometimes 100 or more — and rotate between big group instruction, one-on-one interventions, small study groups or whatever the teachers as a team agree is a priority that day. What looks at times like chaos is in fact part of a carefully orchestrated plan: Each morning, the Westwood teams meet for two hours to hash out a personalized program for every student on their shared roster, dictating the lessons, skills and assignments the team will focus on that day.

By giving teachers more opportunity to collaborate and greater control over how and what they teach, Mesa’s administrators hoped to fill staffing gaps and boost teacher morale and retention. Initial research suggests the gamble could pay off. This year, the district expanded the concept to a third of its 82 schools. (Westwood uses the model for all freshmen classes and is expanding it to the upper grades soon.) The team-teaching strategy is also drawing interest from school leaders across the U.S., who are eager for new approaches at a time when the effects of the pandemic have dampened teacher morale and worsened staff shortages.

“The pandemic taught us two things: One is people want flexibility, and the other is people don’t want to be isolated,” said Carole Basile, dean of ASU’s teachers college, who helped design the teaching model. “The education profession is both of those. It is inflexible, and it is isolating.”

Team teaching, she said, turns these ideas on their head.

Team teaching, a concept first introduced in schools in the 1960s, appealed to the ASU researchers because they felt its unusual staffing structure could help revitalize teachers. And it resonated with school district leaders, who’d come to believe the model of one teacher lecturing at the front of a classroom to many kids wasn’t working.

“Teachers are doing fantastic things, but it’s very rare a teacher walks into another room to see what’s happening,” said Andi Fourlis, superintendent of Mesa Public Schools, one of 10 Arizona districts that have adopted the model. “Our profession is so slow to advance because we are working in isolation.”

Fourlis and others also see team teaching as a way to set their schools apart as a new universal voucher program in Arizona goes into effect, potentially drawing more families and teachers away to private schools. And proponents of the classroom model say it empowers educators at a time when Republicans in Arizona and other states are targeting schools in a growing culture war, passing legislation to restrict what teachers can say about topics such as gender identity and race.

Peggy Beesley, a math teacher now in her fifth year with Westwood’s team, recalled feeling that parents and politicians gave little consideration to her health and safety as they debated school closures. “It’s almost like we have to give up our humanity to become a teacher,” she said. The team, however, made it easier to tune out what was happening outside classroom walls. And her teammates offer built-in, daily training on new ways to teach.

Of course, revamping teaching approaches can’t fix some of the biggest frustrations many teachers have about their profession, such as low pay. But early results from Mesa show team teaching may be helping to reverse low morale. In a survey of hundreds of the district’s teachers last year, researchers from Johns Hopkins University found that those who worked on teams reported greater satisfaction with their job, more frequent collaborations with colleagues and more positive interactions with students. Data on the impact on teacher vacancies, however, remains limited.

School districts that have adopted the model are meanwhile beginning to collect data on its impact on students. A district in southeastern Arizona randomly assigned children to classrooms with the team-teaching model, to test whether it improves student performance. Early data from Westwood show on-time course completion — a strong predictor of whether freshmen will graduate — improved after the high school started using the team approach for all ninth graders. ASU has found that students in team-based classrooms have better attendance, earn more credits toward graduation and post higher GPAs.

The model is not for everyone. Beesley has tried to recruit other math teachers to volunteer for a team, but many tell her they prefer to work alone. Team teaching can also be a scheduling nightmare, especially at schools like Westwood where only some staff work in teams, and principals have to balance their time and needs with those of other teachers. School leaders in Mesa stress they would never force teachers to participate on a team; the district only plans to expand the model to half of its schools.

On a recent morning at Westwood High, the four teachers and 135 freshmen on the team settled into a boisterous routine.

They ignored the Halloween music that blared from the school speakers, marking a new period for older students at the school. As their peers in the higher grades shuffled to another 50-minute class, the freshmen continued into a second hour of their work. Most students busied themselves with the day’s assignments, alone or in pairs, while others waited for a specific teacher’s help.

The team regularly welcomes other educators into the classroom, for bilingual or special education services and other one-on-one support. But substitute teachers are rare, since teachers can plan their schedules to accommodate their teammates’ absences.

Another benefit of teams, teachers say, is that they can help each other improve their instruction. During the planning session earlier that morning, English teacher Jeff Hall shared a critique with science teacher Kelsey Meeks: Her recent lecture, on something she called “the central dogma of biology,” had befuddled him and their other teammates.

“If the science is too confusing for me, can you imagine the frustration you feel as kids?” Hall said. “She would never know that on her own.”

Hall, who moonlights as an improv comic, had quit teaching right before Covid. He worked odd jobs during his time out of the classroom and realized what those jobs offered that teaching didn’t: a chance to work alongside other adults and collaborate. The need for a steadier paycheck convinced Hall to return to the classroom last year, but he only applied for positions to teach on a team.

“Why don’t we do this for every teacher?” Hall said. “Why was I — a student teacher with zero experience teaching English — handed the keys to an entire class of kids on day one? All alone? That doesn’t work for anyone.”

In some cases, teams span grade levels. A group of more than 100 fourth and fifth graders, led by a team of seven educators, was spread out across two classrooms one recent weekday. Teacher Karly LaOrange sat in a circle with three English learners who were struggling with phonics, while a student teacher paged through the same workbook as LaOrange with a larger group of readers, already on grade level. A third instructor nudged another set of kids toward the proper pronunciation of difficult words in another book, “All about Manatees.” Across the hall, another group of students worked with a second set of teachers.

Principal Andrea Lang Sims said she likes the model because she doesn’t have to worry much about new teachers; they can learn from the mentors on their teams. The team approach also allows teachers to pool their skills and work more effectively with students and their parents, she said. A quarter of the school’s families don’t speak English as their primary language, so Lang Sims tries to place a bilingual educator on each team.

Proponents of the ASU model acknowledge it doesn’t work perfectly in a system built around the assumption that every classroom has one teacher. The model presents thorny questions, for example, about how to evaluate four teachers on the performance of 135 students. And teachers on the Westwood team argue they receive too little training on the model.

Students, however, have noticed a difference.

Quinton Rawls attended a middle school with no teams and not enough teachers. Two weeks into eighth grade, his science teacher quit — and was replaced by a series of subs. “I got away with everything,” recalled the 14-year-old.

That’s not the case in ninth grade, said Rawls. He said he appreciates the extra attention that comes with being in a class with so many teachers at once.

“There’s four of them watching me all the time,” he said. “I think that’s a good thing. I’m not really wasting time.”

This story on team teaching was produced by The Hechinger Report as part of the ongoing series Tackling Teacher Shortages, a collaboration between Hechinger and Education Labs and journalists at The Associated Press, AL.com, The Christian Science Monitor, The Dallas Morning News, The Fresno Bee, The Seattle Times and The Post and Courier. Sign up for the Hechinger newsletter.