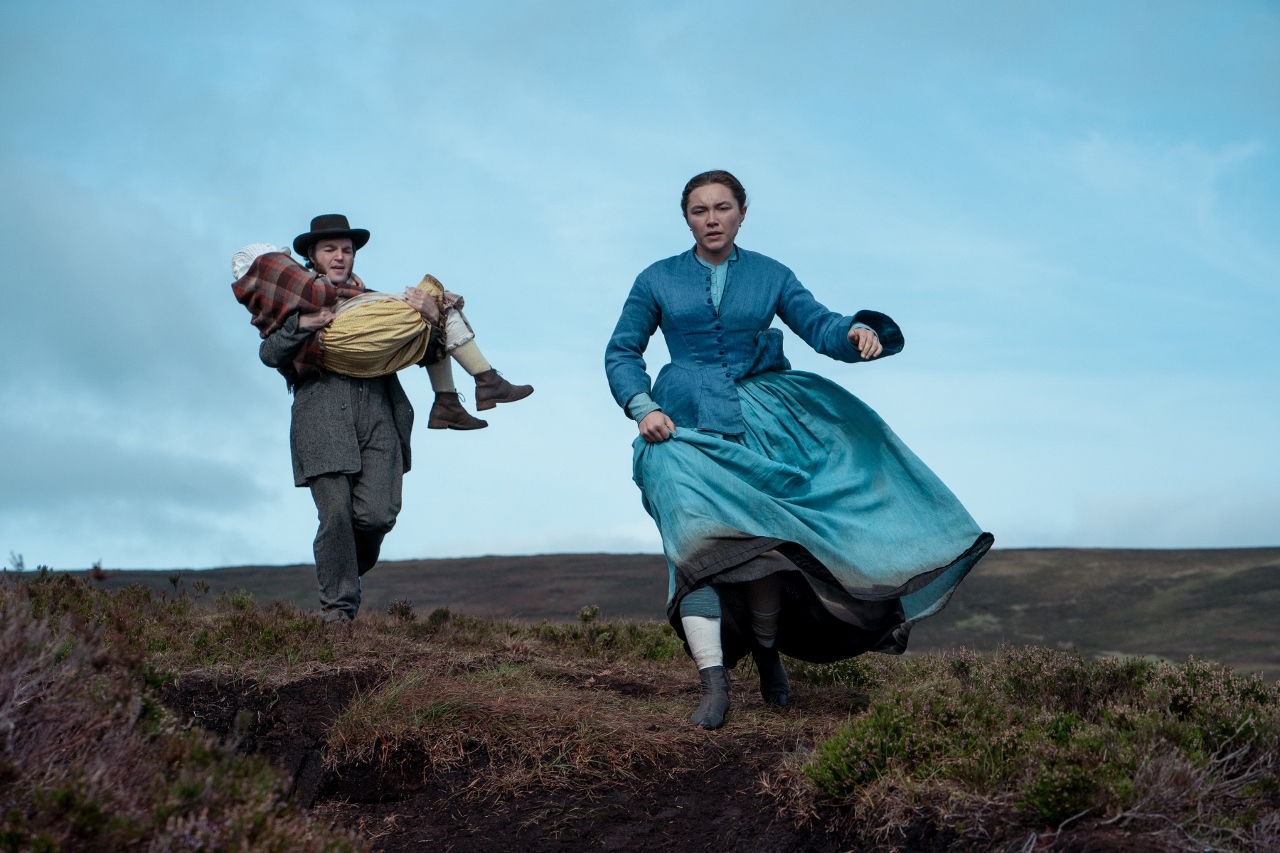 Directed by Chilean filmmaker Sebastian Lelio (“A Fantastic Woman”), “The Wonder” is set in 1862 Ireland, where an English nurse named Mrs. Wright (Florence Pugh) has been sent to keep watch over a girl who has been dubbed “the fasting child” in the press. Her name is Anna O’Donnell (Kila Lord Cassidy). Anna, who recites the same prayer 33 times a day, has reportedly not eaten in four months. She will also being watched over in alternating eight-hour sessions by a nun. “Welcome to Ireland,” Anna’s older sister Kitty (Niamh Algar) remarks acidly. We see peat stacks outside the family’s home, a large two-story cabin, complete with chickens on the ground floor.

Anna’s parents Rosaleen (Elaine Cassidy) and Malachy (Caolon Byrne) are devout Catholics, who believe that their daughter is a saint. The local priest Father Thaddeus (Ciarin Hinds) is less certain. He serves on the all-male committee that hired Mrs. Wright and requested the nun. On her stay at a local inn, Mrs. Wright meets Will Byrne (Tom Burke), a Dublin journalist, who is from the same area as the O’Donnell family. She is told that after Will left his family to go to school during the Great Famine, his family nailed themselves into their cabin and starved to death. Not eating is something with which these people are familiar.

In fact, this world is divided between the people who eat and the people who do not. Most of the latter are dead. Anna, who has a brother who died, is in danger of joining them. Director Lelio repeatedly shows us images of Mrs. Wright eating. Anna is a clever girl who likes playing games with names of saints and people. She “conjugates” Mrs. Wright’s first name Elizabeth into Liz, Beth and Libby. Anna’s mother Rosaleen is especially protective. Elizabeth is a young widow, who was also briefly a mother. She served as a nurse in the Crimea (Florence Nightingale also served in the Crimean War). When Elizabeth is alone in her room, she takes out a pair of infant’s knitted boots, swallows a spoonful of what I assumed was laudanum and goes into a trance-like state. The always welcome Toby Jones plays the local doctor, who believes that Anna has discovered a way to transform sunlight into food. “Like plants.” At regular intervals, we hear ambient sounds suggesting a theremin.

Based on the 2016 novel by Emma Donaghue, who also adapted it, “The Wonder” is about the lengths a family, especially a religiously devout one, will go to to rationalize its darkest secrets. Anna claims to be sustained by “manna from heaven.” Manna was the miraculous substance that nourished the Biblical Israelites in the desert. Haunted by the prospect of another dead girl child, Pugh’s Elizabeth carries a great weight around wherever she goes. She notably dresses in shades of light blue, although her skirt becomes stained around the edge with mud. Pugh’s greatness and gravitas are much more obvious here than in that ungrammatical kerfuffle “Don’t Worry Darling.” Pugh carries “The Wonder.” Her Elizabeth Wright is a proto-feminist force of nature. Nursing was one of the few professions open to women in the 19th century, affording them a living, a certain stature and a voice.

In “The Wonder,” Pugh’s nurse uses all these things to try to save the life of another woman, who is unable to protect herself from the shortcomings and superstitions of others. Widescreen lensing by Ari Wegner (“The Power of the Dog”) adds a fairy tale-like beauty and eeriness to many scenes. The film is book-ended by a shot of a modern film set and someone who tells us that we need stories to live. I’m not sure that was necessary. But “The Wonder” is almost as remarkable as its lead actor.