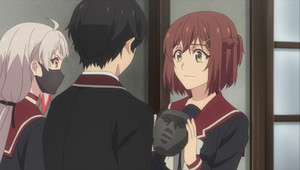 The plot and the blood feud both thicken in Shinobi no Ittoki episode 5. There’s a lot of discussion of the role of ninjas, their code, and whether or not that code can be broken, as well as a few layers of duplicitousness to boot. It’s definitely more than the sum of its parts despite my misgivings from prior weeks.

Being two-faced is the name of the game this episode. We have the introduction of face-altering disguise tech which can not only change someone’s appearance but even their voice, eye color, and mannerisms. In the world of deadly hidden assassins, it’s powerful stuff to have floating around, and we get multiple double-crosses in a row thanks to these things. It also plays well with the theme of the traitor(s) present in Ittoki’s group, and my guess is that we’ve only just begun to see backstabbing and sudden reveals. My money’s on a triple agent by episode 8 and I don’t think that’s a risky bet.

What makes all of this more than your average traitor plot is that Ittoki feels like a main character worth rooting for. There is something both grand and humble about his ambition to, uh, not kill people, given the world that he has found himself drawn into. Usually this kind of restraint feels ham-fisted but he articulates it well during the struggle in the words. In short, Ittoki knows that this kill-or-be-killed ethos leads to unrelenting cycles of violence and he wants to break free from that. Whether that’s a practical goal remains to be seen, but it’s hard to avoid the truth in his words when someone is chasing him to kill him over the assassination of another peace-seeking ninja who tried to break cycles of violence.

If the show can maintain this thematic depth and strong animation throughout the season I’ll be a happy camper.


Shinobi no Ittoki is currently streaming on
Crunchyroll.