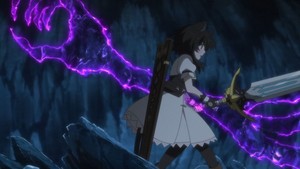 Series like Reincarnated as a Sword can necessarily find themselves coming off like watching a video game Let’s Play a lot of the time. That isn’t inherently a bad thing. Let’s Plays are something plenty of people (including yours truly) have watched for entertainment, that value coming from the actual skill and performance of the people pulling them off. It should also be stressed that any anime featuring episodes with long, contiguous combat scenes need not be lumped into that sort of simile; Let’s Plays are for video games, so a show oughta be sufficiently video-game-y before it nets that kind of comparison. And so, Reincarnated as a Sword‘s fifth episode arrives at that intersection: A Big Fight Episode that also feels like watching a Let’s Play.

The show still has those decently-effective stakes backing it up even as we watch Teacher and Fran hack and/or slash their way through the goblin cave, working to prevent the predicted stampede from last week’s episode. Yes, it is a little odd that a series which led with such an explicit bent against fantasy racism has since concocted an in-universe explanation for why exterminating this nonhuman race is totally okay. But one gets the feeling that’s a technicality you’re not meant to think too much about in the moment you’re watching a catgirl pull off SSS-Rank Devil May Cry combos. They even shift things around a bit partway through this one seemingly for the sake of levity, indicating that reports of the potential goblin stampede might have been exaggerated, and having Fran focus on getting to taste Teacher’s curry recipe as her new primary motivation for clearing the dungeon. Hey, whatever gets you through the workday.

It is ‘fun’ in that baseline way that Reincarnated as a Sword has been able to be since beginning in its better moments. Being always-on for the fighting means the flourishes can’t be as consistently clever and showy as they had been intermittently in previous episodes. So we get multiple shots of more generic slashes from Fran, or Teacher repeating his Split Mind/Twin Cast magic maneuver. That’s still well and good enough compared to the instances where things really dip, like watching a stretch of Teacher casting a succession of buffs on Fran before they head into the Dungeon Master room, like a way more bland version of that one scene from Overlord. It is overall neat to see Teacher primarily running support in this show, but bits like this or Fran accumulating skills from power-leveling in a ‘bonus stage’ full of bugs does make me question if it would be better to see Teacher really working with Fran to guide her in selecting abilities that she might more personally be interested in, rather than having him wholly dictate her build.

That idea of a more mutual relationship, Teacher supporting Fran as a teacher, does come through in different bits. And it kind of feeds into more effective application of that Let’s Play flavor. Teacher gets to direct Fran through anti-goblin maneuvers at the start like some sort of fantasy-combat turn-by-turn navigation system, leveraging his situational experience alongside his capital-E Experience points. Teacher uses the word ‘sus’ during this week’s proceedings, clearly he really did become familiar with how all this stuff works by being a gamer in his past life. The approach lets he and Fran have a running rapport through the battles even as the goblins aren’t putting up much of a fight, going back and forth on Teacher’s in-battle instructions, debating too-sudden kill-stealing, or idly anticipating that delicious curry. Group dynamics are a hallmark of some of the most enjoyable multi-person Let’s-Play-throughs, and if I’ve got my gripes about the overall approach in Reincarnated as a Sword, I’ll still take watching Teacher and Fran here over anything by the Game Grumps.

As with any good game, it also helps when there’s some measure of challenge. As I’ve said before, it’s nice that while they are plenty strong, neither Teacher nor Fran have tipped over into being fully-overpowered isekai protagonists. Plus this episode opens with Teacher noting that the Surprise Tool That Will Help Them Later is a dungeon-escaping magic feather, cluing us in that things on this cave-raiding round might not go as smoothly as planned. So there’s tension to the Dungeon-Master room encounter with a Greater Demon, and that’s even before he chops poor Fran’s hands off! She ends up okay, thanks to Teacher’s healing magic, but it is a real air-sucking moment there, I suppose speaking to how endeared the show has made us to these heroes, even with all the padding talk of spells and statistics. And the Greater Demon punctuates the restoration by making a crack about Fran ‘keeping herself together’, so hey, he can’t be all bad. The Demon even has its own rapport going with the real Dungeon Master, the Rare Goblin that summoned him, letting us get some extra banter in watching these two bosses bicker like an old married couple.

Reincarnated as a Sword is still being supported by a lot of those technical elements I’m ambivalent towards, but despite that, its practiced positives outweigh its negatives in this instance. It’s very much a benefit of analyzing this on an episodic basis, as I don’t know how well this speaks to the more pertinent sociological efforts the series started on, or how ongoing its commitment to overtly detailed game mechanics are going to be as its season continues. But as a dedicated Big Fight Episode, it kept me into it and even made me question if our heroes would actually win here or be forced to retreat. That’s effective engaging storytelling, for an isekai anime, a Let’s Play, or anything else.